Good thing I purloined those air-sickness bags from Continental on the way down... 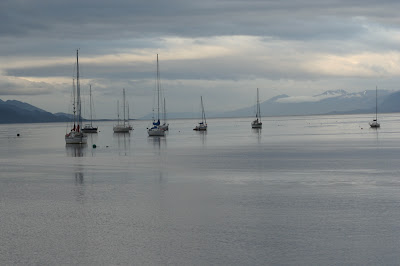 The placid waters of the harbor give no hint of the horrors awaiting us when we emerge into the Drake passage...

We're pulling out. At 16:30 this afternoon we'll diesel our way out of Ushuaia Harbor and east through the Beagle Channel into the southernmost waters of the Atlantic Ocean, for the thousand kilometer journey to the Antarctic peninsula. The first few days we will brave the Drake passage, notorious waters that have the potential to be the foulest in the world. I haven't seen a weather report. 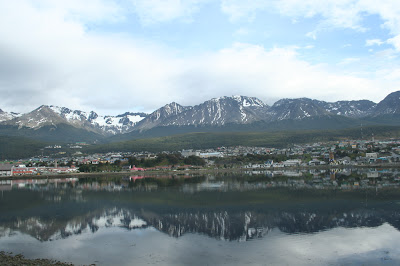 Ushuaia City: a bizarre alpine village, like a cheesy Austrian ski-town, but at sea-level, at the southernmost tip of South America, where the Andes range, that ragged machete scar slicing the full length of this continent, finally gives up and plunges below the surface into the southern oceans.

I am of course tremendously excited to be going back to Antarctica again. And so soon; I left McMurdo December 16th of last year, exactly three months ago. In McMurdo anyone who had the good fortune to have visited Palmer Station and the Antarctic peninsula advertised how spectacular it is, and how different from McMurdo, thousands of kilometers away on the opposite shores of the continent. 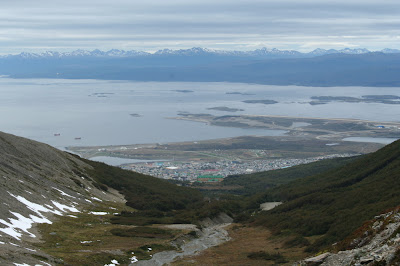 Ushuaia and the Beagle Channel, viewed from the top of the ski-lift at the foot of the Martial glacier

It seems likely, however, that from the decks of our converted russian trawler I will be unlikely to wipe your noses in my next fabulous adventure, to "grip you off," as Simon Dooley puts it. You may have to wait until I'm back in South America to be made envious, but who knows? The arm of the internet is long. Wish me luck on not losing my lunch.

We wait with bated breath to know how you fared
--or rather your insides.