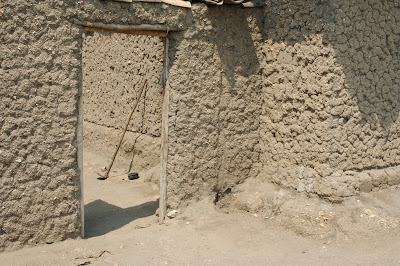 Rural Rwandan buildings are almost indistinguishable from the landscape in which they sit; in most cases the earth used to construct them is drawn from a hole only a few feet from the house, so they are literally made from their own surroundings. Water is mixed with soil in the pit to make a thick mud, reinforced with straw, from which bricks can be cut. These are then laid out in the sun to dry, mere footsteps away from the foundations of the structure they will create. 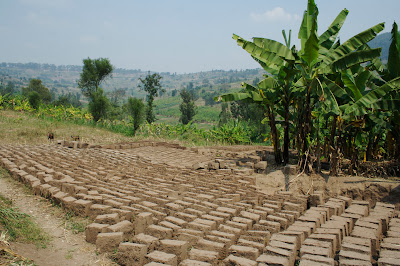 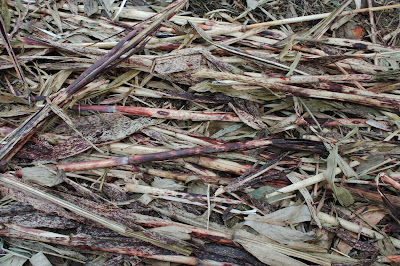 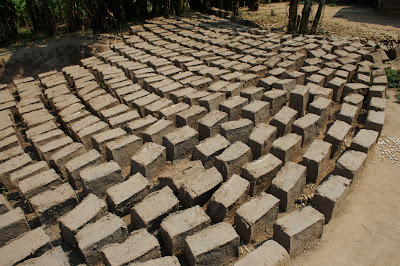 The doors and window frames are cut with hand saws from local, fast-growing eucalyptus. Sheathing on the door is invariably a skin of sheet metal recycled from a disused oil drum that has finally become so battered in its various transits that it can serve no other purpose. The top and bottom are cut off and bent into bowls or other vessels, and then the drum is sliced lengthwise, beaten flat into a rectangular panel, and nailed to the door. Although most are pounded to a rust-speckled patina, on some Rwandan front doors it is still possible to read an oil company logo, sideways: Shell, Fina, etc. 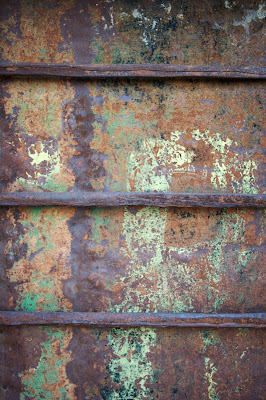 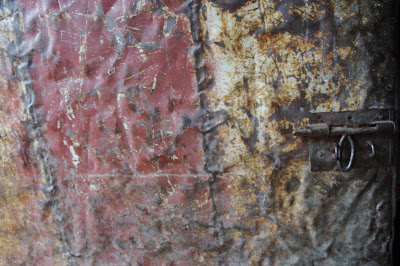 From a global warming perspective, compare the carbon footprint of a house like this with the one left by even our most basic structure. Our 2X4s are forested and lumbered with diesel-burning machinery and milled using energy intensive industrial processes thousands of miles, and sometimes continents away from where they will be used. Our steels girders are shipped from South Korea, the gypsum in our wallboard mined who knows where. The fasteners come from China on ships registered conveniently to circumvent any inconvenient niceties regarding emissions and engine efficiency. 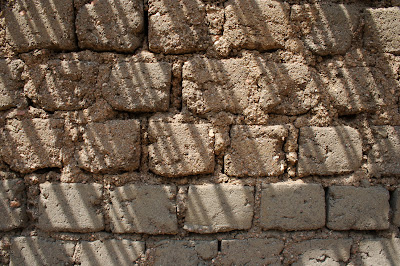 I don't mean to suggest that Rwandan vernacular architecture, or for that matter, any architecture of grinding poverty, grew out of environmentalist sentiment. The first improvement a house here will see, given a bit of money coming into the household, is the plastering of the interior and exterior walls with cement, the bottom rung on the upwards ladder of purchases requiring actual cash money, and the first material that will come from outside the community. The next, and in this context an almost middle class progression, would be to build from cinderblock or fired brick, and the owner would feel no nostalgia for the earthen walls of his ancestral village.

There is no doubt that the African mud-brick house springs from an architecture of convenience and necessity, of opportunism and economy, and of realism in the face of extraordinarily limited financial possibilities. But that does not mean that we should not learn from it. So-called "development" remains a goal and an aspiration across the globe, something almost universally accepted to have a positive connotation. (Who is in favor of "underdevelopment"?). The elimination of poverty and corruption, the improving of education, health care, and human rights are all thought to require it. But if development has brought us to the brink of self-sponsored extinction as a species, without even considering the grotesque arrogance by which we have already extinguished so many other "lesser" species in its name, then we need to do some serious rethinking.

I am beginning to think more kindly of our backyard
"barbecue", which doubles as a brazier in which to burn twigs and a grill on which to broil chicken joints.
It appears to be made entirely of scrap metal and is nothing if not a found object (that's an objet trouvé
to you francophiles)