Twelfth in a field of nine

Having on two recent weekends been off to the races, albeit automotive ones, and gone sailing aboard Anthony Chase’s yacht, Salomé, it seemed high time to combine the two pursuits, and so last weekend Anne, Anthony, Evan and I headed back to Mamaroneck for an ostensibly casual Orienta Yacht Club club race. The prediction was for winds up to twenty-five knots, gusting thirty, a terrifying and pessimistic prediction, for I cannot remember ever sailing in such near-gale conditions. Salomé, a tender, whippy boat, is much better known as a light wind performer, a vessel that will sail effortlessly down the Long Island Sound on a balmy breath of breeze when others are reduced to firing up their ghastly diesel engines to move through the water at all. 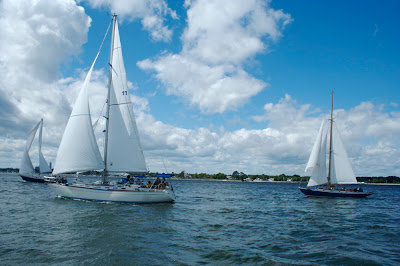 All around us in the harbor was a flurry of activity as competing captains busied about their decks, fired up their engines and began heading out the channel that leads to the sound. Joining the convoy we left the harbor behind us and wasted no time getting the sails up, reefing down one, as there was already quite a blow and the forecast called for increasing winds. We were chagrined to see that many in the field were flying kevlar sails, high-performance, ultra-lightweight rigid canvas made from the same space-age material as bulletproof vests. 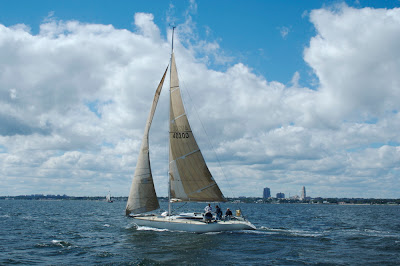 With an hour or so to spare before the one-o’clock gun we tacked back and forth, practiced a controlled gibe and worked on our maneuvers. Proper positioning at the start is critical; it is not, of course a standing start, and ideally one should find oneself sailing full speed towards the line at just the moment the starting gun sounds. If crossing early it is necessary to come around again, a devastating self-inflicted handicap. As the moment approached we found ourselves jockeying in a clump of some five boats, all needing to get around and downwind to get across. While others tacked, Evan masterfully called for a controlled gibe. Suddenly we were through; first out of the starting blocks, or, perhaps, second. 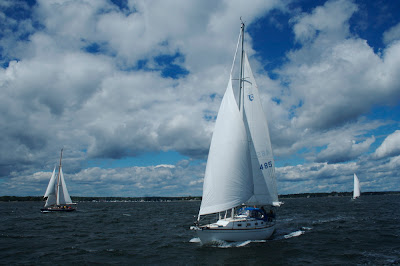 Feel the froth coursing off of our stern, suckas

Running before the wind we had the illusion that the conditions were not so bold; the windspeed of course was masked by the direction of our travel. The larger boats, with their grotesquely expensive sails, began to pass us, but, being lighter and shorter, we felt our first place position secure, as the boats are ranked and handicapped, and only the much bigger boats were out ahead of us. We even fended off an attack from the Patagonia, who tried to slip past downwind of us, only to find us thieving her wind before charging off ahead. 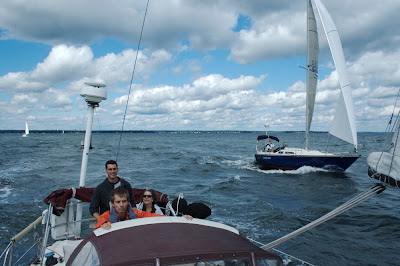 It was upon rounding the first marker that we first felt the fury of the wind. On a “close reach” with the sails pulled taut, the deck promptly canted over at an alarming angle, until the starboard toe-rail was well in the water. We were humming and throbbing along. Anne and I clambered up and sat with our legs dangling out off the port rail, Antarctica veterans relegated to little more than ballast. The first mishap was a near broach, as Salomé proved too flighty to weather a massive gust that took her and turned her right up into the wind until it seemed we were pointing nearly back towards the harbor and our mooring. 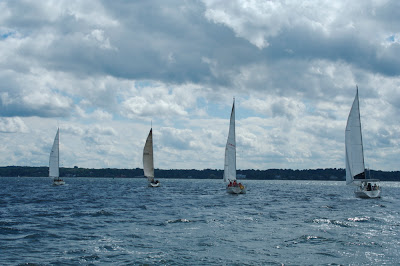 Uhhh; how did all your dudez get ahead?

Things were to go from bad to worse. Inexplicably, once back on course, there seemed to be rather more boats abaft than adraft, or however it is that sailors put these things. Nobody was behind us any more, save a sort of antique wooden showpiece collector's item kind of a vessel, a blue-hulled tub that might once have danced friskily along the waves during the period between the great wars, but was now somewhat long in the tooth. The wind was furious. We eased the sails, then trimmed them, to little avail. From the second mark we were forced to beat upwind, and our fate was sealed by an inopportune tack which had us on a straight collision course for a grotesque party vessel fast at anchor, its decks crawling with recreational fishermen. Tacking again to avoid this unpleasantness, we watched the competition recede onto the distant horizon. We considered inventing a pressing engagement somewhere out East, an overlooked barbecue, perhaps, requiring our immediate presence in the Hamptons. Instead, valiant in completion if not in victory, we pulled finally across the line and headed for the calm waters of Mamaroneck harbor to eat crow along with the celebratory post-race pizza.