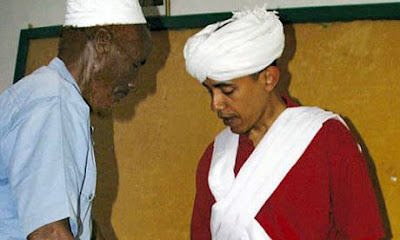 Barack Obama visits Somali refugees in northern Kenya in 2006 and is dressed as a village elder as a sign of respect. 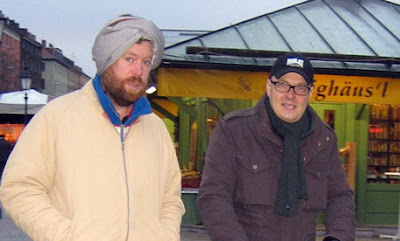 The author visits Brooklyn refugees in southern Germany in 2007 and wishes he hadn't left the apartment without a hat.

In the death throes of the Clinton bid for the Democratic nomination, campaign tactics are spiraling downward like the whirlpool in a flushing toilet. According to the Drudge report, Clinton staffers were emailing the above Obama image around this weekend under a header suggesting their campaign ought to be trying to exploit it to smear Barack. An intra-Clinton email "obtained by the Drudge report" allegedly asked: "Wouldn't we be seeing this on the cover of every magazine if it were HRC?" Now the Clinton camp is trying to suggest that, of course there is nothing wrong with the picture, and visiting dignitaries including Hillary play dress-up all the time, but if the Obama campaign thinks they are being smeared then there must be something suspect about the way they view people wearing towels on their heads. What we really need to do is choose a candidate, put all this absurd sort of acrimony to bed, and start looking for pictures of John McCain in a bikini.