It's been out for almost three weeks...

If you haven't read my father's new book yet, GET WITH IT! 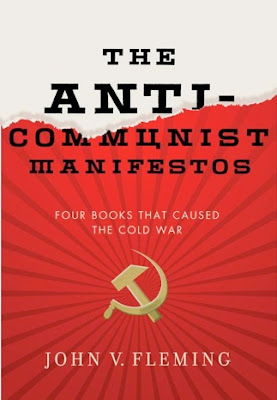 I know, you thought he was a medievalist, but John V. Fleming steadfastly refuses to be pigeon-holed, and in about the time it takes me to put together a decent blog entry he wrote a fascinating analysis of four books very much of and about their time: those grisly years of intrigue between the wars and after, when our necessary alliance with the Soviet Union morphed into the cold war. You might call it a literary procedural; he follows the evolution of four writers who, although initially captivated by Communism, turned away from Stalin and survived to tell the tale. Ultimately each wrote a book condemning the Soviet incarnation of their once-beloved ideology, and these books are the heroes in my father's account; the authors range from the shady and frustrated one-hit wonder "Jan Valtin" to the tortured genius Arthur Koestler. That their motivations and aspirations are often unclear makes this an all the more fascinating read. I highly recommend it.

Email ThisBlogThis!Share to TwitterShare to FacebookShare to Pinterest
Labels: a birth in the family, john v. fleming, literature, reading

I knew that the author of WALKING TO GUANTANAMO was a great travel writer. I now discover he is also a brilliant literary critic endowed with impressive cultural insight and perspicacity.