The Conclusion to a Newfoundland Adventure

Screech n. Popular name for a variety of cheap, dark Demerara rum bottled in Newfoundland; trade-name of a type of rum marketed with the label 'Screech.'
(from Dictionary of Newfoundland English, 2nd edition with supplement) 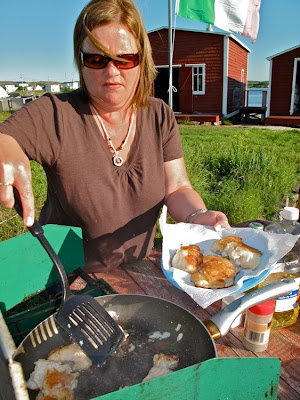 Colleen dishes up delicious butter-sauteed cod from the day's catch, cooked al-fresco on a Coleman stove

When we last found ourselves on the shores of Newfoundland, our merry film crew was preparing to undergo a gruesome hazing ritual. (If you haven't already, I suggest you read the first chapter of this adventure HERE.) Although flattered to have been invited to become honorary Newfies, the three of us, once summoned to begin the ceremony, were growing nervous. Gathered on the warm rocks beside the sea, at the invitation of the Penton clan, we were convivially drinking beer and feasting on the endless bounty of the day's catch. Cod, sauteed in butter. Cod, stewed in a pot, with thick slices of bread. Cod, tongues and britches. No words can describe the incredible flavor and life-giving force of the mighty cod, eaten fresh-cooked. A divine delicacy of buttery flakiness, it is the croissant of fish. 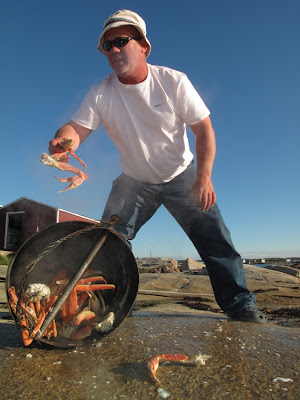 Walter serves up snow-crab legs, boiled in an old propane tank on a beach bonfire. The procedure is simply to dump the whole pot out onto the rocks, gather around, and start slurping. 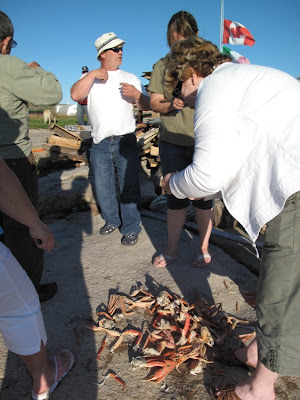 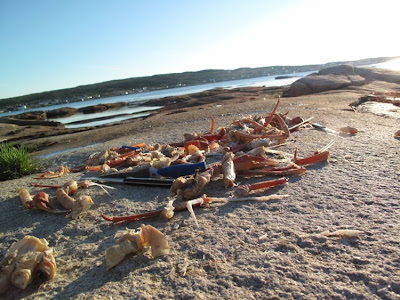 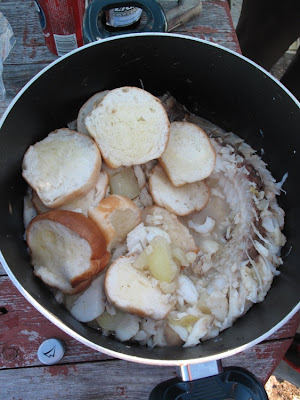 Cod stew with rounds of bread and butter.

It had, in short, so far been an indescribably pleasant evening, but the tension was mounting. Walter Penton had suddenly appeared to cast a shadow over this happy beach party scene. Dressed from head to toe in black foul weather gear, he was like a dark storm cloud brewing on the horizon, threatening the evening sunset. He spouted strange and incomprehensible syllables, which we were apparently not yet Newfoundlanderish enough to understand. It was apparent that he was barking commands of some kind. 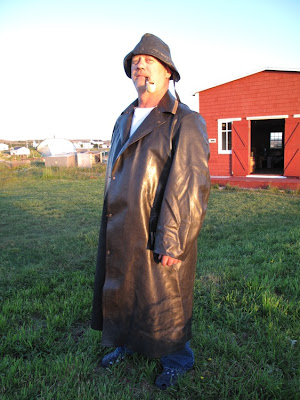 The ominous Walter Penton, although the crocs and blue jeans peeking out from under his oilskin sort of took the edge off.

The gestures made it clear. We were to sit, the three of us, crushed together like shackled oarsmen on a Phoenician galley, on a low bench. Black oilskin sou'wester hats were placed on our heads. Penton towered over us. Our first task was to repeat examples from his tortured Newfoundlander idiom. He bent over. "Something, something, something, mind your lassies come in barrels," he yelled, inches from our faces. At least that's what it sounded like. His breath smelled of cod, and seaweed. "The wund's gone nar, nar wist, darse gone right outiver." We made feeble attempts to recreate these sentences, understanding nothing, but trying to parrot the syllables we heard. The gathered tribe of Newfoundlanders guffawed as we struggled to make sense of these paleolithic fragments of language. But they were laughing with us, not at us.

The uniqueness and antiquity of the Newfoundland tongue is no joke. Story, Kirwin and Widdowson's Dictionary of Newfoundland English is 770 pages long

, and contains many fascinating examples of linguistic mangling and invention. Opening at random to page 496, we find that "slob" refers to a slushy, icy water condition, not any shortcoming in personal hygiene. Instead, to describe someone of "a slovenly, untidy appearance," the word to use, found on the same page, would be "slommocky." "Slub" is a "slimy substance on body of fish; blood, slime, liquid refuse from process of splitting cod," whereas "slop" is both a split and salted undried cod, while also synonymous with "slob," in the Newfoundland sense of the word. Paging on, we find "snub," referring to a cod-fish "with a rounded, blunt snout, believed to be a sign of good luck," and "soaker," "a very large cod-fish," as well as "sound," which is "the air bladder, or hydrostatic organ, of a cod-fish." "Spanish" doesn't mean someone from Spain, it refers to "lightly salted, dried cod-fish of the highest quality," destined for the Iberian market. Newfie English is, in short, a complex, deep and expressive tongue, but one in which most words refer in one way or another to the all-important cod-fish.

For our next ordeal, the lovely Colleen Penton Higgins then instructed us each to remove one shoe and one sock, and to roll up a pantsleg for a kind of pedestrian baptism. Each of us put our naked leg into a bucket of frigid north Atlantic seawater, turbid with bits of kelp and other unspeakable maritime detritus. Colleen then massaged our ankles and calves with this seaweed stew. I found this strangely erotic. Coming from Brooklyn, where I live between the dubious waters of New York harbor and the decidedly foul Gowanus Canal, the weedy water smelled clean and pleasant. Similar seaweed treatments can be had in the finest Manhattan spas, and cost hundreds of dollars.

While hoping that my other leg was about to receive the same treatment I considered proposing marriage, but I was rudely snapped from my reverie by the announcement that we were now to eat "Newfie steak." This proved to be an absurdly large, gray chunk of bologna. As Walter passed me my ration on a toothpick I heard someone in the crowd say: "I can feel the heartburn from here." I had already eaten more than my fill of snow-crab legs, cod-fillets, cheeks, tongues and britches, and this enormous chunk of Spam-like substance was considerably less welcome than the foot massage.

Two more trials awaited us. First was the ceremonial kissing of the cod. Unfortunately we had eaten every last one of the mammoth fish we had caught earlier that day, and there were no cod to kiss. Hurrying back to the shore-line, Walter returned with the gutted carcass of a fish, and declared that it would have to do. I had earlier that day been so excited to catch my own cod that I had given it a big smooch, so I felt I ought to get a pass on kissing Walter's cod, which was nothing but a head attached to a filleted spine. It was hardly romantic. "But don't worry, it's got no tongue," said Walter, cackling. 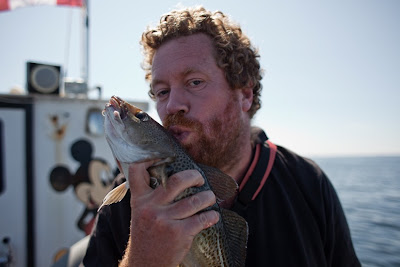 After a perfunctory kiss of the cod-remnants, it was finally time for some screech.  Shots of extraordinarily unpretentious rum, served out of a boot. It was official. We were now Newfoundlanders! 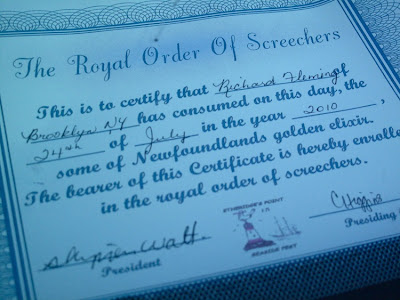