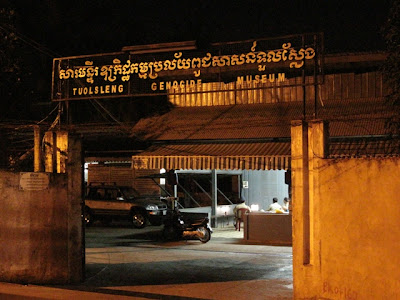 “You want Tuk-tuk?” It is a question familiar to anyone who has visited Cambodia. This is the battle-cry of the entrepreneurial motorized tricycle driver, stationed outside of every hotel in Phnom Penh. A Tuk-tuk is a brightly painted miniature caravan, pulled by a motorcycle; walk a block or two here and you will be offered four or five chances to take a ride in one. You shake your head, no. “You want Tuk-tuk?” The driver asks again. He has a smiling, friendly, underemployed face. “You want to visit the killing fields?”
The Killing Fields? One thing to understand about Tuk-tuk drivers is that they offer their most popular excursions first. The way the driver says these words makes the place sound like a boutique for shopping, or perhaps the latest trendy restaurant, somewhere one would surely like to go. A destination. In Phnom Penh, the killing fields, that gruesome piece of real estate synonymous with the Cambodian genocide of the late 1970s, is a major attraction, even while its scars still run deep. Welcome to disaster tourism, Cambodian style. 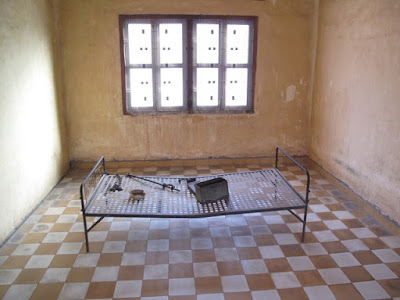 No Tuk-tuk is needed today; the Tuol Sleng Genocide Museum is just across the street from the hotel. It is a former school complex, four three-story buildings that once housed a primary school and a high school in the center of the city, before being converted by the Khmer Rouge into the torture center known as S-21. For this space to have been repurposed once again as a place for learning, even about such a grim history, is already a powerful metaphor. The Khmer Rouge cadres massacred intellectuals, students and professors, treating knowledge as dangerous and subversive. They exterminated as much as a quarter of the population. 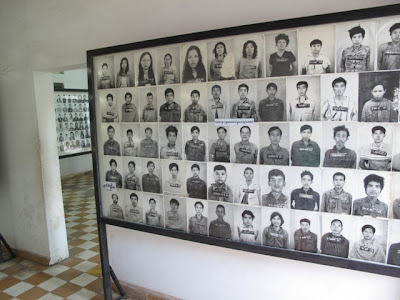 On a recent afternoon, most of the visitors to Tuol Sleng are tourists, many of them passing briefly through Phnom Penh on their way to Siem Riep and the temples at Angkor Wat. There are many of them, making their way through this very simple and very powerful exhibition. It is little more, really, than a terrible place left virtually untouched since the Vietnamese forced the Khmer Rouge out of power in early January of 1979. The former classrooms crudely divided into tiny cells not fit for animals. Walls now crowded with headshots of the victims. 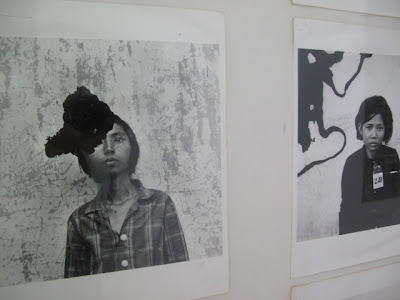 What brings people here? Why take time out of a hard-won vacation to wander through these unremittingly grim rooms? Posted on the walls of the buildings at Tuol Sleng in the style of “No-Smoking” signs are drawings of a grinning man, covered by a red circle with a bar. They mean “please don’t laugh, or smile.” It’s not a welcome directive on a holiday. But horror, empathy, curiosity and incomprehension combine to form the most powerful of emotions; these are the same ingredients so often exploited by Hollywood to have the maximum impact on moviegoers. 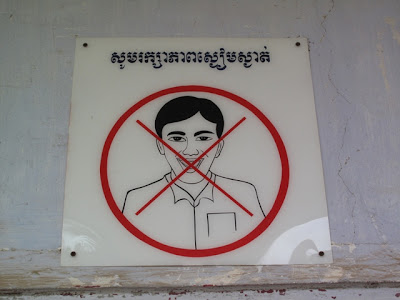 Inside, nobody is smiling. The most chilling and evocative spaces are in the first building, where neither the torturers nor the museum curators did anything to change the layout. The rooms are large, with unforgettable checkerboard patterned floors of alternating white and yellow tile. They would have been cheery classrooms. In each room is a simple steel bed frame and a few of the mundane props of torture: a shackle, an iron bar. On each wall is a single photograph, impossibly faded and grainy. It is an old and weathered blow-up of one of the images made here by the combat photographer Ho Van Tay, of what he found after the arrival of the Vietnamese. The fourteen bodies left by the fleeing Khmer Rouge are buried in the courtyard outside, in plain white vaults, but until Van Tay arrived, their corpses were still chained to the beds. 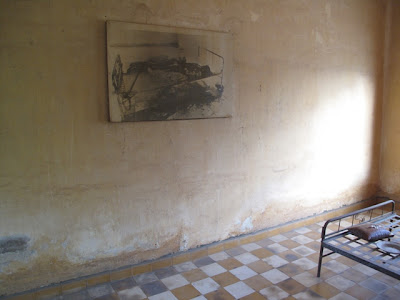 The photographs are murky, almost pitted, and perhaps past due to be reprinted, but upon close inspection one realizes that the exact bed sitting in the center of the room is the same one in the photograph hanging on the water-stained wall. In the image, the checkered floor tiles are gray and white, but they are clearly the very same tiles that are under your feet. One understands suddenly that the room, the floor, and the bed all match, and that only the body, twisted in its final agony, is missing from the current reality of the scene. It is a visceral, emotional moment. One visitor felt it was intensely private. “You feel you are a voyeur, looking at something you shouldn’t be seeing,” she said. “And so for someone else to come into the room when you are there, it’s as if you’ve gotten caught.” But the point, of course, is that one must see, and must not forget, and the feeling of are bearing witness is another of the reasons so many visitors come here. 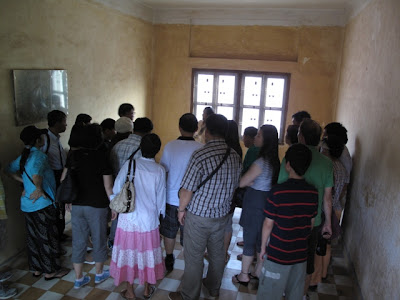 Back out in the sunshine, under the barbed wire and the swaying palm trees, the Tuk-tuk drivers are still waiting and hopeful, but they seem to have mercy on the contemplative mood of the departing museum guests. "Maybe tomorrow?" one asks quietly. "The killing fields?"

Email ThisBlogThis!Share to TwitterShare to FacebookShare to Pinterest
Labels: cambodia