My most recent flurry of travels included flying from Somalia to Calcutta with a layover in Kenya, permitting me to revisit a favorite haunt.

The vast, sprawling city of Nairobi, and both of its airports, butt right up against a premier game reserve, Nairobi National Park, the splendid legacy of a time when the city was little more than a tiny high plains retreat for British colonials. Imagine if New York's Central Park was the size of Queens, and roamed by herds of wild game. The park holds all of the so-called "Big Five," the animals on the "must see" most-wanted list: elephant, buffalo, rhinoceros, lion and leopard. 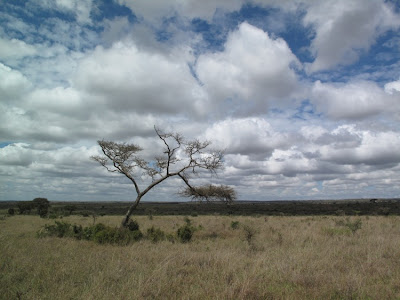 As the city expands, the pressure on this real estate must be significant, but so far the park survives, ringed by dozens of miles of electrified fence, minimizing contact between urban human and dangerous wild game. The insensate Buffalo is the most dangerous; it will rear and charge and trample you under its mighty hooves before it has even evaluated what sort of threat you might pose. The hippo, separated from its offspring, or rushing back to the safety of the water, will flatten you like a diesel road roller. In East Africa, the elephant, a genial creature by nature, has had too many unpleasant experiences with humans. It does not trust you, and the rogue, lone male will sometimes attack even your vehicle. For all these reasons and more, it is prohibited to descend from the car in many African game reserves.

But this regulation makes birdwatching difficult. One wants, always, to follow that elusive call into the bush, to peer deep into shrubs, to get out of the car and stroll in the forest. I cautiously ignore regulations against walking in Africa. After all, millions of carless Africans have been living in relative harmony with all these animals for years. If someone is occasionally munched, or flattened, that is the way of things. I accept that. In Rwanda's Akagera National Park I have camped, alone, where I liked, hiked into the acacia forests, startled giant crocodiles at the edges of the swamp, and even skirted herds of elephant on foot. Always keeping a healthy distance dictated by respect, but not paranoia.

On my last trip to Nairobi National Park I had therefore fearlessly gotten out of my hired taxi whenever I spotted a bird, which is to say, almost constantly. But on this visit, within minutes of pulling through the front gates, I was embarrassed  to be busted by a park ranger, who pulled up short in his green Toyota Landcruiser when he saw me standing in the road, some fifty yards from my van and driver. "What you are doing is very dangerous. And it is not permitted," he said, in crisp, officious, post-colonial English. "Yes, sir," I said.

"Return to your vehicle at once." After I complied, the ranger drove up and held a brief conference in Swahili with my driver, the excellent George Olukuye. Then he sped off, and George and I wrestled open the safari pop-top of the van. "He said that if he sees you out of the car again, you will be fined," George told me. I fumed. Birding out of a van, even a convertible one, was not what I had had in mind. 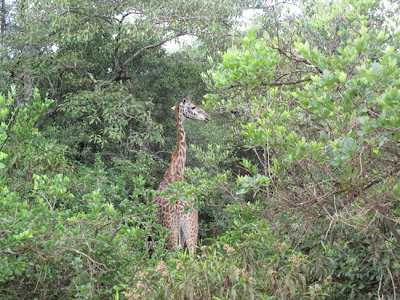 Tourists in game reserves demonstrate a herd mentality, as if eager to prove they are not so very different from the animals they are watching. Pause for a few moments looking out of the top of a van through binoculars, and every other van within sight will hurriedly u-turn its way back to your patch of track, fearful of missing something. "Een ornitholoog," I heard one disgusted dutchman tell his family, after they sped over, only to realize that I was looking at a small, nondescript bird.

An Ostrich might get a pause and a glance, but what most visitors really want to see are the Big Five. Two drivers passing in the track pause and ask each other if there have been any rhino sightings. "Simba?," they ask, in hushed tones. The lion is king. It is possible, but difficult to see. It is perhaps at the top of the list for most visitors. (You could spent twenty days of layovers here and never see a leopard, so that spectacular cat generally remains in the realm of fantasy). 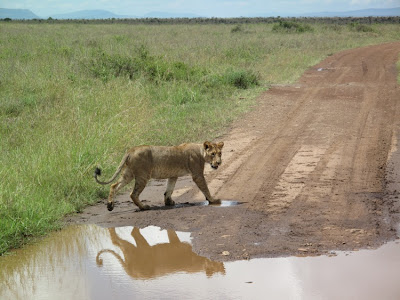 Imagine our joy, then, as we were driving slowly up the track, to come upon a lioness, drinking from a puddle in the road.

In the natural state of things, unless startled, harassed, or abnormally hungry, the lion does not attack we humans. Like bullies, they prefer prey smaller than themselves. The phenomenon of the man-eater, of the lion that has tasted human flesh and found it to his liking, gives one pause, but the presence of lions is not normally enough to keep me in the car. (However, I would never get out of a car in the presence of a lion). 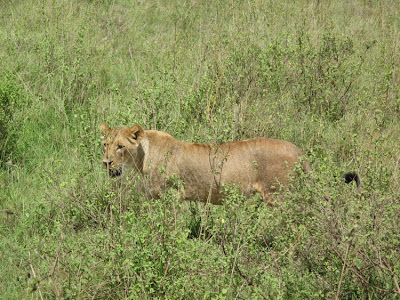 Where there is one lion, there are generally more, and as we sat, parked in the track, watching and waiting, another one appeared from an insignificant shrub beside the road, just the sort in which on another day I might have searched for a singing bird. If they are unlikely to attack humans, they also care little about them. Simba is not scared of you, and he will walk languidly across the road and examine your car with a slow twist of his powerful neck. 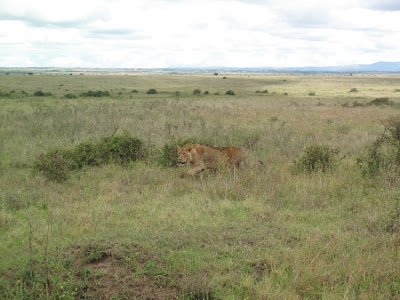 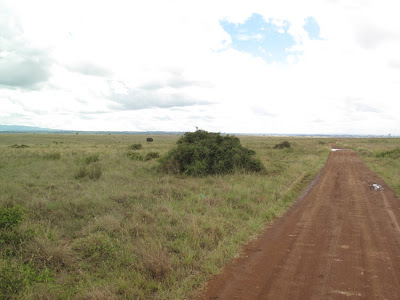 Soon, three lions had settled into the shade of the only shrub found on our patch of savannah. Had you told me that the lone bush, above, provided sufficient cover for three lions, I would have laughed at you, but I saw the lions go in to it and become invisible. Had I not seen them I must admit that here I would happily have gotten out of the car after looking around, certain that there was no big game, no threat, just open bush. A lesson learned. 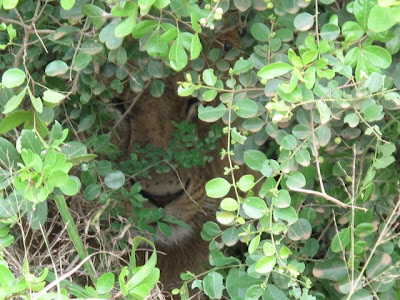 Half an hour later, when we passed back that way, they were still there.

Have your many years of experience led you to the discovery that the best way to locate clients is to leave spam comments on unrelated blog posts?

Love the pics of the lions - in fact all your pics are great. Will be back to read more!