Faithful antarcticiana readers may recall an item from last fall celebrating the original bicycles manufactured by Giovanni Pinarello and the cult-like dedication with which certain cycling nerds perpetuate his legend. Earlier this week a second meeting of the Brooklyn Pinarello Society convened in Prospect Park for a few blistering laps, generating the envy of the poor, misguided trendoids who have replaced the timeless elegance of Italian steel with one of those absurd carbon-fiber monstrosities that now passes for the "state of the art" in road bikes. 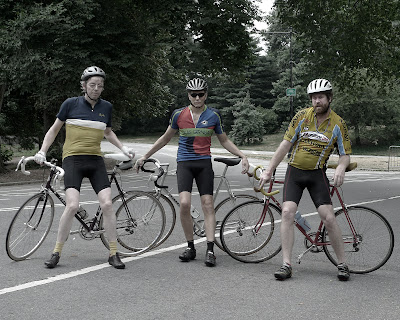 I tre Pinarelli. I believe you are looking at 148 years of combined cycling wisdom in the image above. And I'm not talking about the bicycles, which probably have about 75 years between them. Portrait of the musqueteros courtesy of champion shutterbug Wolfgang Wesener, left. In the middle, in the ominous glasses, our man from ATLAS. 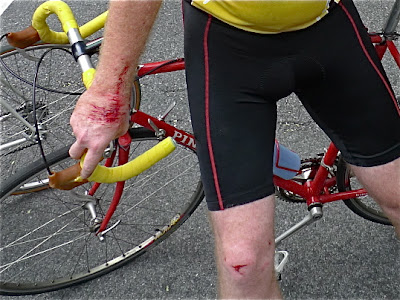 The day was not without its purple hearts, as yours truly suffered a head-on collision with a tentative and indecisive fourteen year-old girl who weaved back and forth down the hill on a mountain bike directly into our churning peloton. I was inches off of the back of Wesener's wheel, enjoying the draft, and I didn't even see the threat coming until the moment before impact. Although I was bloodied, and the girl suffered a very fat lip and enormous embarrassment, the precision steel of Treviso came through unscathed. Without even so much as a wobbly wheel I managed a further six laps before leaving the park in search of a winery.