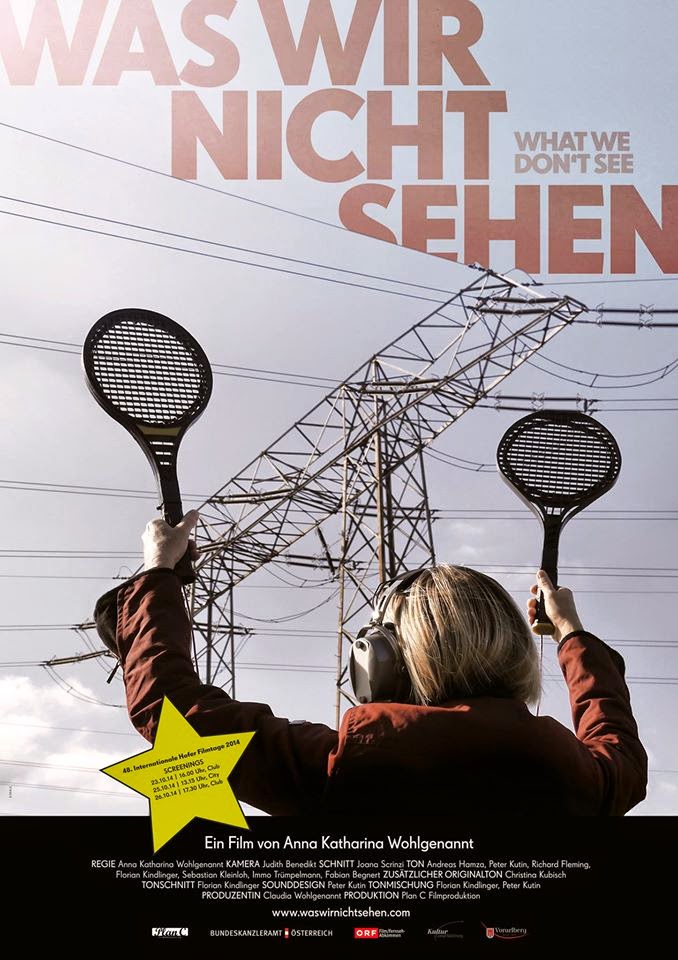 At the beginning of What We Don’t See, the new documentary by Austrian filmmaker Anna Katharina Wohlgenannt, the artist Christina Kubisch wanders through a weedy field beneath high-tension wires, wearing bulbous old-school headphones while gently waving a pair of what appear to be plastic tennis rackets, as if swatting slow-motion flies. Later, we see her meandering through city streets, lost in her own auditory world. Her headphones are modified to translate the electro-magnetic radiation that surrounds us, all the time, into sound. We hear what she hears, a constant, dense soundscape of hums, buzzes and tones that serves as a powerful metaphor for the hyper-connected technology-driven world we have created for ourselves. There are now more cellphones in circulation in the world than there are people. Our homes have wifi accessible air-conditioners, thermostats and smoke detectors, and telecommunications companies squabble over the last unused blocks of radio bandwidth. If all these anthropogenic transmissions and emissions were visible we would scarcely be able to see our own hands in front of our faces. What if all those signals flowing through the air are debilitating to our health and sanity?

Rather than attack this question head-on, Wohlgenannt offers non-judgmental portraits of five people already certain that electricity, wifi, and cellular transmissions are poisoning them. Her characters live underground behind thick brick walls, or in remote, isolated rural areas. They sleep in Faraday cages, line their homes with mylar foil, or wear metallic radio-repelling chain-mail undergarments. If what they say is true, they are canaries in the digital coal mine; all of our fabulous technology is killing them, and will soon kill us. They suffer from, or believe they suffer from, Electro-Magnetic Hypersensitivity, or EHS.

A year ago, I drove to Dulles Airport in Washington, D.C. to pick up Wohlgenannt and her cameraperson, Judith Benedikt. I had been hired to record the sound on the final, United States portion of their shoot. We headed to Green Bank, West Virginia, a remote, forested bowl in what is one of the poorest states in the country. The town is near the heart of the United States National Radio Quiet Zone, where a near-complete radio blackout is enforced over thousands of square kilometers. Eliminating human-based radio signals avoids interfering with a giant telescope that has sometimes been used to monitor the intergalactic radio waves constantly beaming down on us from space, in hopes of finding signs of intelligent life. Perhaps paradoxically, many Americans who have diagnosed themselves with EHS have moved here because of the government prohibition on man-made radio waves. Diane Schou and Jennifer Wood, who appear in the film, told stories of discovering Green Bank as if it were a lifesaving oasis in the desert. They believed their self-diagnoses with near-religious fervor, and had made great sacrifices to move there. Although Schou lives in a quite comfortable, custom-modified house, she rarely sees her husband, who works halfway across the country in Iowa. Wood abandoned an architectural career and almost all the trappings of contemporary life (she owns a car) to live in a tiny wooden cabin without electricity or plumbing.

Are these people simply incapable of coping with modern life, and so flee a society that has become too dense with communication and information? Or have they correctly identified the source of the almost absurdly diverse array of maladies that EHS sufferers report: everything from migraines and tinnitus to numbness, joint pain, weight loss, exhaustion and gas? Science has so far failed to find support for their claims, to which many answer that because the curing of their condition would require abandoning mobile telephony and the wireless internet, twin drivers of the global economy of the last twenty-five years, great forces are aligned against them. Perhaps it is no surprise that EHS sufferers can seem paranoid and conspiracy-minded.


What We Don't See is a kind of documentary science-fiction, proposing an alternate future, one already inhabited by Schou and Wood, who both say they would like to warn us about the path that we are on.

On her last day in Green Bank, I asked Katharina whether, after a year spent in the company of electronically tormented people, she had grown more or less convinced that the phenomenon is real. It's a question she carefully avoids addressing in her film. “I'm much more certain it's a problem,” she said, quickly.

Then I asked the cinematographer, Judith Benedikt, the same question. She said “I'm afraid I feel the opposite. At first, I thought, maybe.... But not any more.” But back at home in New York, I had a ten-month-old baby in the house. Ruby. It was hard not to say to myself: What if? For a couple of weeks, every night before going to bed, I carefully turned off all the cellphones, the computer and the router. Did we sleep better? Some nights I thought so, but gradually I got out of the habit. It was too much trouble.

It is so sad to see the comment "there is no scientific evidence proving any health problems". Independent non-industry funded scientists are describing our overexposure to EMF radiation as the BIGGEST health crisis our planet and its inhabitants have faced.

See what the experts are saying at http://EMFsummit.com