A first descent of the challenging south-eastern approach to Mt. Friis 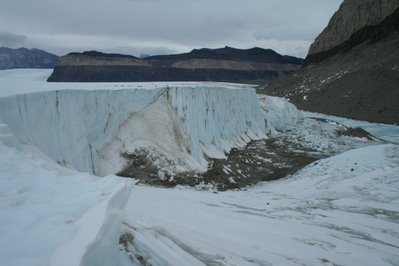 We pull out of the Friis Hills in three days. I'm not sure if this suggests we are eager to go, but already we are in a frenzy of packing. In part this is because Adam Lewis will leave ahead of the rest of the group; he is being picked up tomorrow and will accompany all the gear and leftover supplies we don't need back to McMurdo. So once again we are schlepping weighty boxes up the hill to the helo-pad.

As for ourselves we are supposed to head back to MacTown on Wednesday, the helicopter schedule permitting. According to helo-ops, Wednesday may be rather hectic and we might have to sit tight out here for a day or two, because a lot of DVs are in town. The term "DV" is another relic from the days when the Navy ran McMurdo; it means "distinguished visitors," and its use is identical to that of the acronym VIP. I remember it from a little bit over a year ago when I steamed, if that is the right word to use for travel on a nuclear-powered ship, from Dubai to San Diego, on board the USS Nimitz, a gigantor aircraft carrier. We dawdled somewhere off the west coast of India to participate in "joint exercises" with the Indian Navy, and I remember one day in particular on which various helicopters were detailed to ferrying DVs back and forth between the Nimitz and the absurd scoop-nosed claw-foot tub of a geriatric carrier that the Indians had brought to the party. The point being that our schedule is a little uncertain, as some of the helicopters may be tied up ferrying around Congressman High Mucketymuck and any other persons of particular power and influence who have decided that this is a good week for viewing penguins out of a chopper and satisfying themselves that the globe is not yet disastrously warmed.

Not that we are in a particular hurry to get out of here. (Anne, moments ago, before she lay back on her cot and began snoring off the effects of a grilled-cheese sandwich lunch: "Gawd, I want to go back to McMurdo right now like I want to shoot myself in the head.") Today we were astonished to find ourselves outside packing boxes, wearing light sweaters and thin gloves, and finding it positively warm. The thermometer now reads 16 degrees F, -8 degrees C, weather that in New York might inspire me to cancel that day's commitments, fire up the woodstove and curl up on the couch. We are settled in and acclimatized. 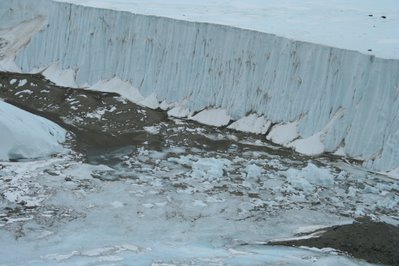 A couple of days ago Sylvestre and I took a farewell hike down to the edge of the Taylor Glacier. Since the very first night we arrived here on our little plateau and I walked out to a scenic overlook and photographed the enormity, I had wanted to attempt to climb down and see the glacier close-up. It looked doable, via a descending valley strewn with crumbled granite that steepened as it sloped downhill towards the ice. But the distance was deceptive. The glacier never seemed to get any closer as we hiked down, down, and down, jamming our toes against the ends of our boots and pausing occasionally to look over our shoulders in horror at the ever-more daunting climb back up and out, a climb we were adding to with every step. Eventually the gravel channel grew too steep and to avoid an unpleasantly sudden arrival at the bottom we set off at an angle across the scree, heading for what looked like a more gentle slope down, somewhere off to the south of us. 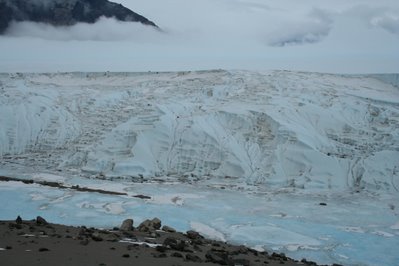 Finally, we knew we were near. The edge of the glacier, which from far up above looked narrow and of indeterminate but no great depth, revealed itself to be a towering ice-cliff some thirty meters or more high. Well before we reached the valley floor, where meltwater had collected and frozen to make a turquoise sheet of ice, we passed below the upper surface of the glacier. We found ourselves in a sort of canyon, with a frozen lake under our feet, the black dolorite cliffs of the Friis Hills on one side, and the mammoth verticle ice-wall of the glacier on the other. 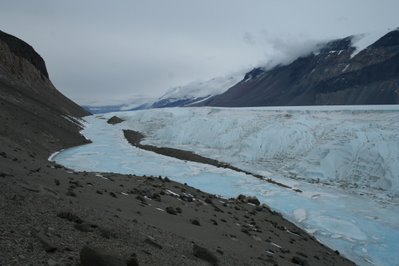 Near an enormous granite boulder, where we sheltered from the wind to gobble chocolate bars and beef jerky, a sort of cleft in the glacier had created a gentle sandy slope up to its upper surface. It was a stream-bed, where melting glacier ice, and the wind had deposited grit carried here by the ice-flow. We scrambled up it and then traversed a snow-bank just below the top edge of the enormous ocean of ice. At the top, the way you might get out of a swimming pool by pushing up with your forearms, we were able to clamber up onto the glacier itself. I sat, dangling my legs, with miles of undulating blue ice flowing out behind me, filling the enormous valley.

Adieu, Taylor Glacier, I thought. Adieu, Friis Hills; this is how I want to remember you. 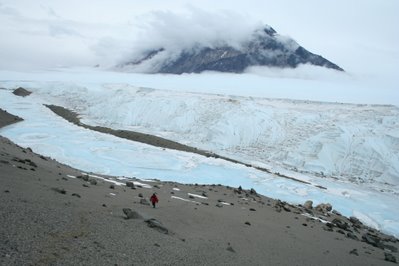 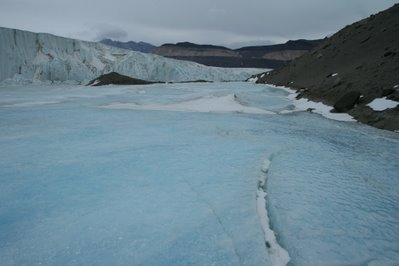 The climb back out was as brutal as we had imagined, six hundred vertical meters in little over a kilometer of crow-flying, according to my GPS. We zig-zagged our way up the loose rock and gravel, pausing more and more frequently to gasp for breath and admire the view behind us. Just before stumbling into camp we came upon the geologists, all four of them on hands and knees, sifting dirt through spaghetti strainers and grubbing in the dust as if looking for truffles.

"Success?" asked Adam Lewis. "Did you make it to the bottom?"

"You may be the first people ever to go down there," he said. "I've certainly never been down that way. You know all those mountaineers who come down to Antarctica looking to do 'first ascents' of unclimbed mountains? Well, I think you guys can safely claim this as a 'first descent.'" 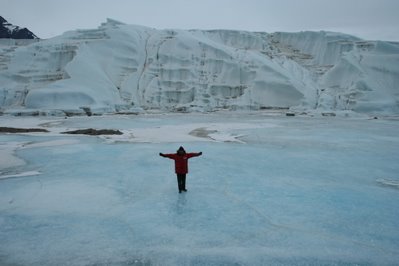