Tuesday night Whiskey-218 went out for a last fine meal together, at Saggio di Vino in Christchurch, marking the indisputable and bittersweet end to an epic filmshoot, much the longest on-location tournage in which I've yet been involved. It is sad to think that Whiskey-218, which was our call sign on the McMurdo radio waves, will never again check out for a Pisten Bully jaunt across the frozen Ross Sea. Never again will we call MacOps from deep in the dry valleys to ask them for the helicopter schedule or just to tell them that all is well. In essence, Whiskey-218 ceased to exist yesterday, when I hugged Anne and Sylvestre goodbye in the parking lot of a budget car-rental outfit along the road to the Christchurch airport. Our trio, after so long, disbanded. In the way of film shoots and the freelance existence, it may well be that Anne and Sylvestre and I never work together as a unit again; it is even likely that only on the rarest of occasions will we three find ourselves again in the same place at the same time. What a strange thought, after spending more than four months as inseparably joined as it seems plausible to imagine any threesome ever being.

Through it all we got along remarkably well, avoiding tension and strife like Inuits, accepting one another's quirks, arrogancies and eccentricities with patience and an ongoing spirit of cooperation. Sure, we had our moments of strife and misunderstanding, but they were rare, brief and soon forgotten. The idea of going back to my regular life in Brooklyn after such an intense and icy experience seems odd, and seems to me to hold the promise of an even greater culture shock than I have experienced when returning from other lengthy shoots in Haiti, or Rwanda or the Philippines. I don't envy Anne and Sylvestre, who flew straight home yesterday and must already be on the ground, in New York and Montreal, wondering what it's all about. At least for myself I have arranged a lengthy decompression period here in the slightly familiar but still wacky world of Southern Hemisphere white people. But it is strange just to be alone.

Syl and Anne, I wish you both a smooth and painless re-entry into what passes for society on the urban eastern seaboard.

The disbanding of W-218 should also mean the logical end of antarcticiana, the blog. It was, after all, created with the sole intent of updating friends, relatives and the curious as to the various adventures encountered during the production of a film in Antarctica. But the pleasure I felt when it became clear that a few of you were actually reading it immeasurably relieved the sense of solitude and isolation it is possible to feel in Antarctica. The blog has proved to be an invaluable goad to keeping me writing, and a forum in which I felt free to experiment with all sorts of styles of written communication, from the pompous and self-involved to the ridiculous. I hope here and there across the vast diaspora of antarcticiana readers some chuckles have now and again been chuckled, but it doesn't really matter, because I have laughed uproariously throughout. There are in-jokes buried in here that are so "in" that I am quite certain only I actually got them. Luckily, as my father pointed out to me years ago, I have cultivated "an infinite capacity for self-amusement." Not to mention that in four months I earned $19.80 referring hapless link-clickers to the Amazon superstore....

So for the time being I think I will continue. We'll just drop the "in Antarctica" bit and consider this the ongoing chronicle of the adventures of a sound recordist. At the moment, I'm on vacation, which means I am birdwatching. If you think that's a bore, lose my URL, chumpy. But check back in mid-February, when I leave for Easter Island to begin my next job. 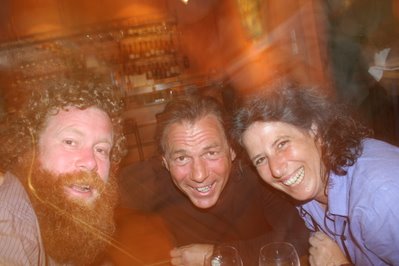 Back in NY. Quite disorienting. This will end up being my first post to your blog. I considered making comments before but never found the witty tone that I would have liked. In my quite literal way, I'm not sure I can make this post funny either. It's been quite a ride. As I write these words, I'm getting emotional, but I will make sure the three of us find ourselves together again somewhere, for a screening of the film, or some other occasion we'll have to invent -- and as you know, I'm generally pretty good at keeping my word for this kind of thing. Enjoy the birds, and be well.

just a quick word to say that I've really enjoyed reading your words over the last few (has it really been?) months, from over here in rainy old england, so for what it's worth, I'd be happy if you kept writing.
cheers for the words
fuzz

Seconding that thought: Keep writing--
and counting brids (or do I mean grils?)

I've really enjoyed your writing these past few months, Richard. I've laughed, learned some interesting things and have been inspired. Some of your photography is stunning. Keep up the great work. I'm writing from Vancouver, British Columbia.

Hello I want to congratulate to you. This site is fantastic, looks like entertained and very good to me it elaborated. I invite them to that they explore a little on my site of the Web
Our real estate listing includes great opportunities on Costa Rica Central Valley’s provinces such as San Jose, our Capital, with remarkable cities as Escazu at the west, or Curridabat at the east, experiencing a great development on both commercial and residential properties, making their real estate pricing highly attractive to investors; on other hand, Alajuela city gathers places with a very special warm weather such as Grecia, La Garita and Atenas, or beautiful farms for agricultural, cattle or nature preservation purposes as those located on San Carlos or Sarapiqui. We also offer land properties in Guanacaste, which is the province, along with Puntarenas, with the most beautiful tropical beaches on the Pacific Coast such as Tamarindo, Playa Grande, El Coco, Playa Hermosa, Nosara, Samara, Herradura, Jaco, Manuel Antonio, Dominical and Golfito, where the real estate business occupies the first place as the local economic activity.
Great investment opportunity at Costa Rica Pacific Coast, Preconstruction condos in costa rica
Condo sales in costa rica, Retirement property in costa rica. Visit us for more info at: http://www.costa-ricarealestate.com/