The Spine of the Iguana

This morning when I woke up and went out for a coffee I realized I already feel overwhelmed by all the humanity, despite being on a sparsely populated island of a mere four million. After only one day in Kaikoura I was tired of seeing cute young ozzie couples on vacation drinking lattes or queuing up to go whale-watching, kayaking with the seals, learning to dance salsa with giant octopus, or any of the other abundant and varied ecotourism options available here. On my map of the South Island, a promising-looking dead-end road wound up into the foothills of the Seeward Kaikoura Range behind us, to the base of Mt. Fyffe, where, I read, there was a "locked gate." Beyond the locked gate a track meandered across the flat piece of paper to the summit, which dominates Kaikoura's view, for those who take the time to turn away from the sea. 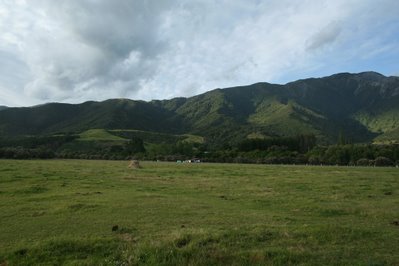 
"Mt." is apparently some sort of abbreviation for mountain, I soon discovered. Once I had found the car park at the end of the road and slung on my backpack, the track, although marked "passable for 4-wheel drive," had a remarkably uphill sort of feeling to it. In fact walking on it I was reminded of climbing a volcano, the Volcan Santa Maria, many years ago in Guatemala, when I was young and in my prime. Because volcanoes are essentially ever-growing piles of rock whose shapes have recently been defined by gravity they resemble the pile of sand at the bottom of an hourglass. Therefore trails up them tend to go straight up: no fussing about with zig-zags, or a bit of up, then a bit of down, then rather more up, and so on. I don't think Mt. Fyffe is a volcano, but the track up it went up. Up. No down at all to speak of, no resty flat bits, just up. The mountain is shaped like an iguana, or the dorsal fin of a fish, and the trail followed its spine up from the tip of the tail, steeply up towards the arch of the back. Two one side of this sharp ridge the forest plunged down into a sort of wooded canyon, the habitat of Hobbits. On the other it plunged towards the sea. The views back down towards the coast were spectacular; I could see all the little whale-watching vessels motoring out to the continental shelf, and the entire shape of the Kaikoura peninsula spread out before me. Onward and upward I trudged. 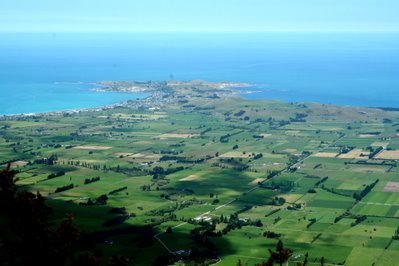 Kaikoura from on high


(Birdwatching interlude; feel free to skip ahead to the next paragraph if necessary). The most common feathered species to be found in the scrubby windswept growth beside the track was the Brown creeper, an active little creamy-bellied, rufous-capped sort of fellow entirely new to me. I found also the bold and even friendly New Zealand robin, a chunky dusty-gray flycatcher with a white belly, rather larger than but quite identical in shape to the british robin, known to those who named it from back home in their english gardens. I slogged onward and upward, gratified by my new sightings. (End of birdwatching interlude).

I am not the sort of person who needs to reach the top. After an ascent of just under a vertical kilometer in some three hours, I had reached, however, the New Zealand Department of Conservation hut at an altitude of 1100 meters, where I paused, and thought about food. Immediately following my arrival an Israeli couple who had spent the night there emerged and, facing one another, began to do a sort of mirrored yoga and calisthenics regime, apparently to prepare themselves for the descent.
"How's it going?" I asked.
"Oh, very, very good," said the woman, smiling like the Mona Lisa, apparently blissed out on the mountain air and the stretching tendons.
As I began gorging myself on a luncheon of canned smoked tunafish on rosemary crackers, the couple hoisted on their backpacks and headed back down the trail.

A sign a few minutes earlier along the track had offered three options: more going up, two hours worth, to the summit; descent, the way I had come, also advertised to take two hours; and an alternate route back, via a side trail plunging down the knife-edged rib-cage of the iguana to the river-valley below. How long the DOC thought this would take was unclear, as someone had carefully and completely blacked out the suggested time, revising the estimate to read, in magic marker scrawl, "3 hours." I tried to remember how long the sign at the car park had suggested it would take me to reach this point, in order to attempt some sort of calibration, but I hadn't paid attention. Nor did I have any idea whether the revised estimate for the side trail was meant to suggest that the DOC was either grotesquely optimistic or instead unwilling to put down a number that might insult even the slowest, feeblest, fattest huffer and puffer ever to set foot here. But I certainly wasn't going to continue to go up, and why return the way I had come? I tidied up my tuna crumbs and plunged down off the side of the mountain's spine. 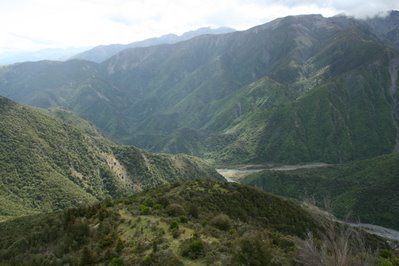 Plunging descent into the valley behind

Let me point out that from here on my use of the word "trail" demonstrates what a very generous person I am. The toe-jamming series of plummeting switchbacks leading abruptly down through the alpine grasses at the tree-line were well-marked by posts, but the way itself was a faint line, often little more than an almost historical or even mythical impression, as of the long distant passage of a lone mountain goat. It went down the sides of boulders, over the edges of hummocks and brushed past shrubs. It was very, very steep. Looking down, between the toes of my boots, I spied the colored backpacks of the Israeli couple, who had paused and were looking about themselves with concern somewhere near a marker post visible along the ridge far below me. I saw that they were advancing at a snail's pace; I had taken my time eating my lunch and had not expected to see them again. Soon, largely because of my inability to control my forward momentum as I all but rolled down the mountainside, I passed them. The woman looked rather worried, and no longer blissed out at all.

Entering the forest did nothing to relieve the savage verticality of the trail, but suddenly I was in the midst of trees I feel quite sure were of the genus Podocarpus. Unique evergreens, they have tiny leaves and bark that sheds constantly in enormous strips, shaggy and rough, as if the tree is in a permanent state of moult. Suited to extremes, Podocarpus species grow in the high Andes in Ecuador and Peru as stunted, tortured shrubs near the tree-line there, generally some 4000 meters, then grow in stature as one ascends the southern latitudes and the Andes in the direction of Patagonia and Antarctica. They are, in fact, one of the few species whose fossilized leaves we might expect to find on the Antarctic continent, were it to prove true that it was much warmer there some fifteen million years ago. As always, I loved it inside the forest. 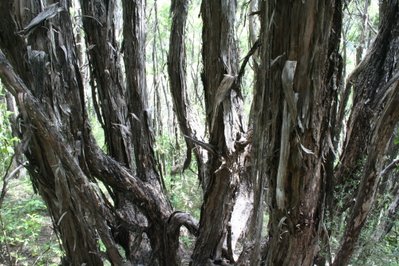 
At last, with bruised toes, I emerged into the natural clearing of the riverbed, which had been visible from far above as a wavy, ice-blue ribbon carving its way through swathes of green. There were no more trail markers to be found, but I knew that my car was parked somewhere downstream. I followed the river's gray shingle floor, jumping from boulder to boulder.

Perhaps the river was running extraordinarily full at this time of year. If not, the New Zealand DOC should post prominently at the head of the trail some industrial hazard warning signs of the yellow and black variety, featuring an icon of a man hip deep in raging rapids, waving his arms for balance as he watches his possessions swept downstream. The first time I needed to ford the river I removed my new gore-tex boots, my two pairs of socks, and my trousers, placed all of these on top of my head, and gingerly made my barefoot way across in boxer shorts, as the torrent did everything in its power to knock me over. Already the second ford was so daunting in its power that I decided to keep the boots on to avoid further bruising my feet and to lessen the chance of going swimming with my camera, binoculars, gps, wallet, backpack, passport, funds in various currencies and all the rest of the things I had thought it unwise to leave in the trunk of the parked rental. 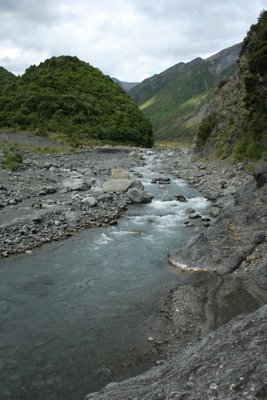 The glory of gore-tex, of course, is that it is waterproof, yet breathable. Unfortunately it is just as waterproof from the inside as from the outside, so in the long stretches of walking over loose rock between the fourteen or so times that I was forced to wade through the water to avoid one or another black, basaltic canyon wall, my feet were permanently awash in a gradually warming slosh of glacial runoff. Just as my feet perked up again after recovering from the chill I would invariably reach a spot where I was required to resoak them in order to continue. At last, around the bottom of the iguana's spine, the ocean came back into view, and an orange plastic arrow pointed towards the car park. I revved the engine and drove back to Kaikoura for a late meal of fish and chips. I hope the Israelis made it before nightfall.