After opting for a relaxing, extended New Zealand and Australia vacation wind-down from last fall into winter's Antarctic extravaganza, I discovered last week that ten days in New York was barely enough time for me to have one home-cooked meal in Red Hook, let alone relax and enjoy my castle. It was hectic, harried and distracting, and that despite my barely leaving the house. Now that I've rushed off again the only upside is that I wasn't even back long enough for me now to get homesick. Suddenly I'm in Easter Island, magical, wonderful, extraordinarily remote and a place I would be most unlikely to visit if someone weren't paying me ready money to wear my headphones and wield a microphone boom. 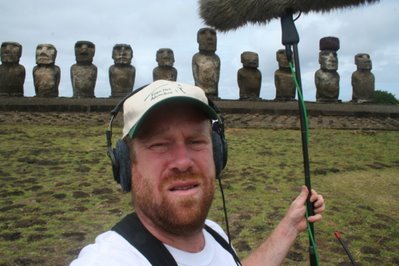 Grumpy, Squinty soundguy, back to work. Am I really needed here? These Moai are not making very much noise...


A tri-cornered volcanic slab in the mid-Pacific, five and a half hours flying time from Santiago de Chile, Easter Island is one of the most remote chunks of rock to be found jutting up out of any of the world's seas. Despite Thor Heyerdahl "proving" on board Kon Tiki that the original inhabitants here could have arrived from South America by raft, nobody serious thinks anything other than that the original people here represented the eastermost outpost of Polynesia. The locals that I've met consider themselves a branch off of the Maori tree and feel a closer cultural affinity to Hawaii and Tahiti than to any part of South America. The owner of our hotel here recently flew to Aukland to partcipate in a pan-Polynesian dragon-boat paddling competition. 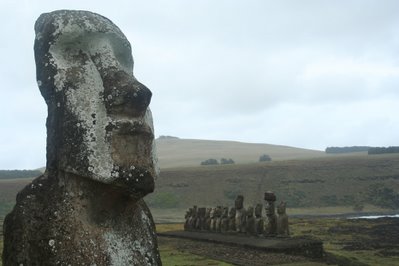 Despite there being only two tiny although spectacular beaches on the island, the economy is driven entirely by tourism. There are four thousand permanent residents, and something like thirty thousand brief and transient visitors. Yesterday a Norwegian cruise liner arrived and anchored offshore from Easter Island's only town of Hangaroa, disgorging tenders full of pasty germans. We were inspired to hustle in our morning filming of the Moai quarry, to avoid the dire predicament of having the background of our shots filled with scurrying ant-trails of tourists in Bermuda shorts. The Moai, of course, are the enormous, enigmatic sculptured heads which seem to me to represent the most extreme example of graven image worship ever made manifest by any human society. These are vast, twenty-ton objets, some four hundred in number, virtually all of which were carved in situ at the quarry at Ranu Raraku, a towering black bluff of a rock called tuff, a rather soft volcanic stone that is quite easily worked. How these statues, once completed, were moved into their positions many miles away around the perimeter of the island is what everyone here refers to as "one of the many mysteries." 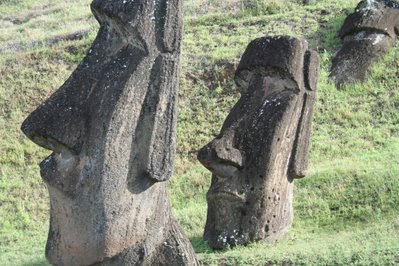 No two Moai are alike, and their humanoid faces, when not degraded by erosion or toppled and damaged by the occasional tsunami, show distinct personalities and expressions. There is a predominant type, however, and the bulk of the Moai share a rather droopy and long-faced profile with the late president Richard Nixon. In position, invariably facing inland from atop platforms beside the sea, known as Ahu, the rows of Moai look like a gigantic chess game waiting to be played by oversized intergalactic visitors. And despite years of archeology there isn't much hard evidence to support any competing theory. I would like to believe that the locals still know everything about the Moai and their function, but have never wavered through generations of successful secret-keeping. But the devastation of 90% of the island population by smallpox, syphilis and other charming european imports after contact probably buried the secrets of the Moai forever. But because their purpose and meaning remain largely in the realm of the speculative, the Moai are a sort of blank slate for everyone from conspiracy theorists to logicians. Depending on where you fall on the belief spectrum, the Moai either descended from outer space or were painstakingly moved on their backs, over the course of many years, on mammoth wooden sledges, with the help of most of the able-bodied population of the island. Some adroit googling reveals an infinity of theories in between. It's a delicious mystery. 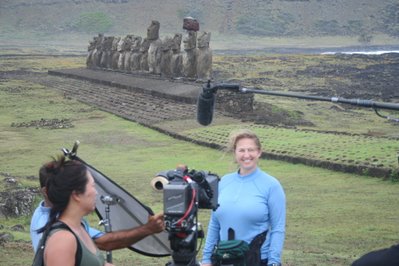 This is not our crew. We arrived in our two vans, making our series for Discovery Channel, only to find these jokers set up overlooking this spectacular row of Moai, doing a standup for, I believe, the Travel Channel, which Discovery also owns, if I am not mistaken. Thankfully the enormous worldwide media agglomerates still are not quite organized enough to have conspired to exploit us into filming both shows at once. Instead we had to dance around and make sure our people avoided wandering into their shot, and so on. The smiley blond babe is probably the producer, just standing in. The "talent," as we say in the biz, was some jester wearing an Australian bush hat and a safari shirt, of course. What else would you wear to stalk the wild Moai? "Excuse me, we were here first. Please wait your turn behind the other film crews."

Right on! You're right where we started our honeymoon. Wish we'd be there right now.

Good to see your grumpy ol' face again under a base-cap, not framed by fuzzy frozen fur (hey, what an alliteration). But with all due respect to your periodic bouts of germanophobia: the term "pasty" seems to be more adequate to describe your own fellow countrymen, at least according to the WHO statistics.
Not to mention that "pasty Germans" equate the literary cliche of "frivolous Frenchmen", "drunk Russians" or (sorry) "dumb Americans".

Just concerned about the accuracy of your writing style,

Dear Concerned Berliner
Germanophobia? Heaven forfend: "Some of my best friends are Germans." Even my very best friend, who just moved back to "pastyland" and can hardly wait to be out of there again.

As an ugly, not dumb, American let me observe that yes, this woman may be pasty, but check out those bazooms!!; and what on earth could make you think that anything you read here is about "accuracy" or, "writing style!"

But, as always, I´m very glad to hear from you!

Cheers from the management

Actually times are changing. Here in Munich it's the annoying Russians (who drive up retail prices in all those prissy boutiques), the poor Frenchmen (losing the soccer championship to those 'fucking' Italians, which is a verbatim quote we heard one too many times here in the town that prides itself to be the Northernmost city of Italy) and the warmongering imperialist pig Americans (alright, that one's been around for a while).

And talking about pasty - if I don't find a decent boxing gym soon, I WILL look like one of those pork products which make up 80 percent of the local diet.

That was interesting the way the Travel channel was also there.