Sadly I wasn't able to stay in Chile long enough...

Flew from Santiago, Chile to Belize City yesterday, with five hours of lounging on the filthy carpets of the Miami airport in-between. I spent a couple of my days off in Valparaiso, my new favorite city, about which more soon, but my greatest regret, other than going back to work of course, was that I missed this: 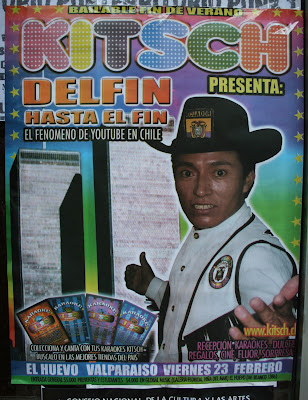 Yes, those are the Twin Towers in the background, and yes, this guy is the "Youtube phenomenon of Chile," despite the fact that he is wearing an "Ecuador" hat.... Please, if you have any more information... share!

Update: Apparently Ecuadorian Blogspot homeboy Delfin started posting cheesy homemade music videos of himself singing morbid and maudlin cumbias on Youtube and has quickly become all the rage. His elegiac crooning to his late girlfriend, who purportedly perished in the World Trade Center disaster, has become a notorious anthem sufficient to launch Delfin on tour. You may already purchase Delfin ring-tones for your cellie and there are rap, metal, techno and many other genre covers of his "hits" already available and remixed, and so on. The show I missed was at a nightclub called El Huevo, the Egg.

How I wish I could make this stuff up!