In Oslo our busy shooting schedule had no free days built in, but I was very much hoping that somewhere I would find a moment to sneak across the harbor and visit what might best be described as the "Museums of Norwegian Pride district." There, beside the bay in a tranquil neighborhood of rolling pastures and rocky coastline, a cluster of small museums celebrate Vikings, Norse seafaring, Thor Heyerdal’s silly Kon-Tiki expedition and two of the world's pre-eminent polar explorers, Fridtjof Nansen and Roald Amundsen, commemorated in a building housing the legendary Fram. Commissioned by Nansen, the Colin Archer designed expedition ship was in 1936 hauled out of the water on log rollers, and parked permanently ashore. An A-frame building (or perhaps an A-fram) was then built around her where she sat on the grass.

To me the Fram is the most legendary of all ships ever to sail in polar waters, and I wanted frantically to prowl her decks. Built to order for Nansen's mind boggling journey, begun in 1893, on which he sailed north from Christiania (Oslo's name at the time), the ship was intentionally frozen into the pack ice in the hope of drifting with slow but inexorable flow of the ice-cap, toward and over the north pole. That the ship survived this three-year ordeal and returned unscathed to Oslo is incredible enough. Nansen then lent her to Amundsen, who sailed her to the Ross Sea en route to his successful assault on the South Pole. So when a morning opening in the schedule presented itself, I rose early and leapt on the number 30 bus to Bygdoy. 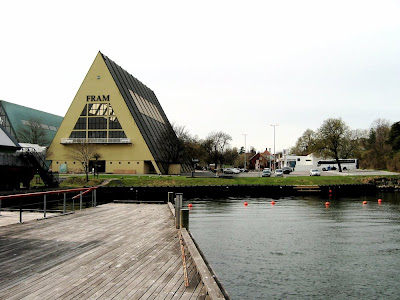 Inside this humble yellow structure lurks the Fram, masts and all 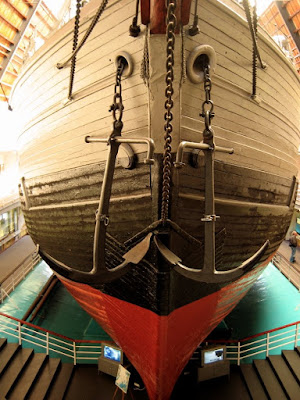 In a building built to fit around the ship as tightly as possible, it was difficult to capture the entirety of the vessel 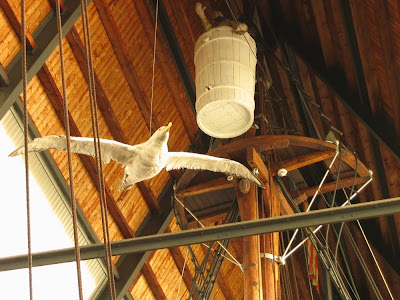 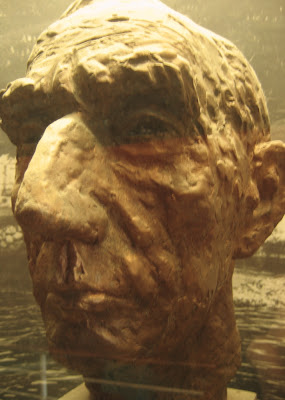 Mr. Personality: One reason Roald Amundsen may have had trouble getting his due in the annals of exploration is that even the statues commissioned of him, which one might imagine would err only in exaggerating his natural charm and winning good looks, depict him as a surly, taciturn and eagle-beaked bundle of grouchiness. No wonder the handsome Scott, who arrived at the South Pole late and then froze to death for his pains, epically failing, is more famous. 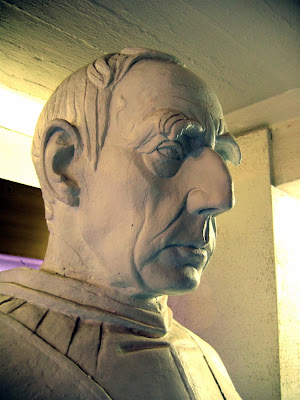 Two stories of walkways lined with glass cases allow the visitor to observe the Fram while drooling over all the various claptrap one would have expected to find on board an expedition ship a hundred years ago. In one case an unannotated emperor penguin egg nestles up against the bow of a violin. (This rather an unfair display, since Apsley Cherry Garrard, "Birdie" Bowers and Edward Wilson risked their lives to become the first to successfully collect one of the former, well before Amundsen's journey south). An adjacent case holds Amundsen's boxy wooden film camera. Stuffed auks from the north share a diorama with penguins and seals from the south. Here are tin pots, cutlery, weapons, desks and bookcases, touched by the greats. Incomparable vicarious pleasures are here available to the polar geek. 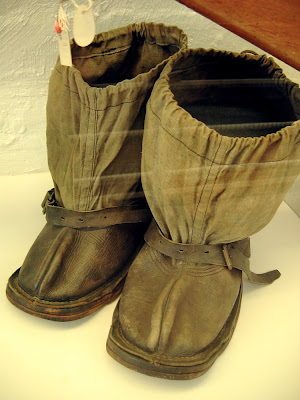 The original "bunny boots," as the white rubber monstrosities now issued to McMurdo visitors are known. 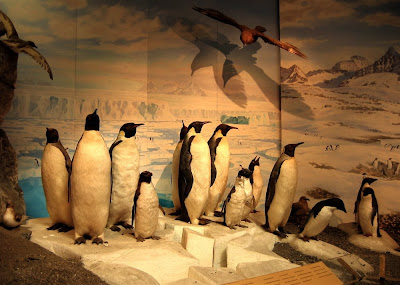 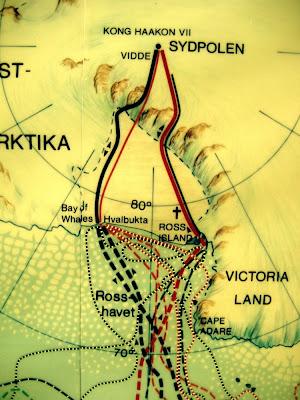 Arriving moments after the opening of the museum, I found myself all alone on the deck of the Fram. It took some time, but I was as persistent as any polar explorer and finally managed to figure out how to use the self-timer mechanism on my camera. 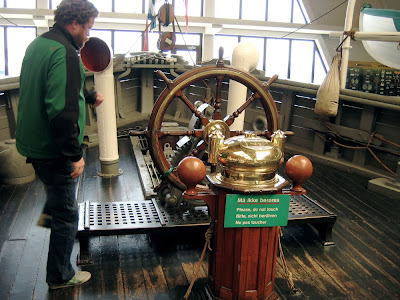 A first effort, in which I was a bit slow to respond to the captain's order to take over the helm. 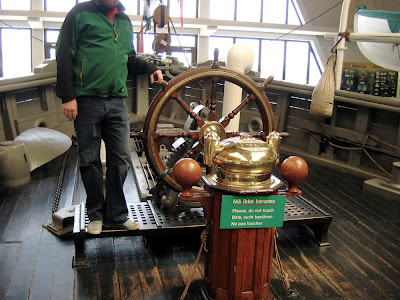 My second attempt. Determined to remedy the tardiness illustrated in the first photo, I failed to pay attention to what was perhaps an even more important shortcoming... 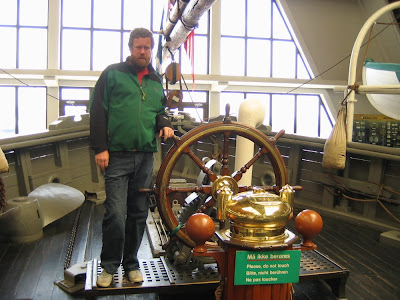 That's more like it, but does this steering wheel make me look fat? 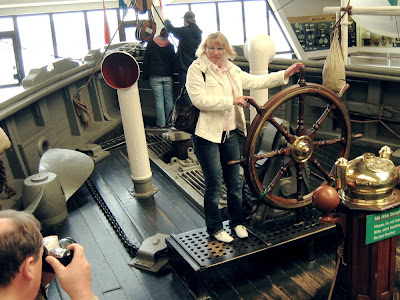 Moments later a busload of German tourists arrived, quickly casting doubt on the originality of my concept. 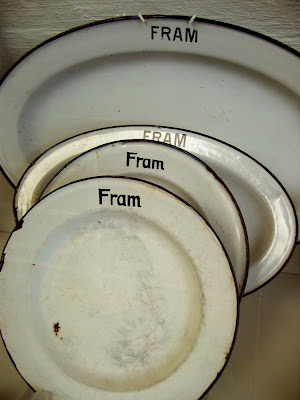 The actual plates from which actual explorers ate their hoosh! 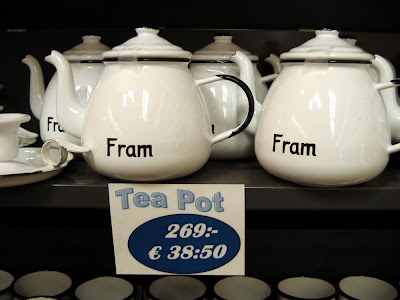 The gift shop carries a full line of replicas. At 38 euros fifty for a cheap enameled tin teapot, however, the visitor could be forgiven for imagining that he was purchasing an original. Oslo makes Tokyo look like a bargain paradise; it is by far the most expensive city I've even been in, particularly with the US dollar following Zimbabwe's in a savage tailspin. How about a grilled cheese sandwich for twenty dollars? Cup of coffee? $7. Ten block taxi fare: $30. Thank goodness I'm on the job! 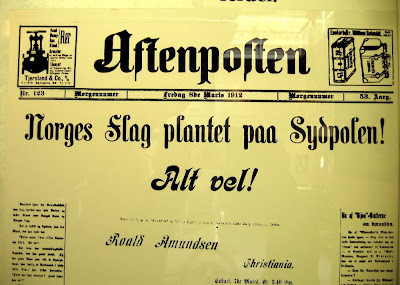 My Norwegian is no better now than it was when I arrived in Olso, but I was able to deduce that some one hundred years ago, Amundsen successfully reached the South Pole.... Alt vel that endt vel!

Oh my, and I thought $1 for a cup of coffee in Costa Rica was expensive. Thank God I just received my tax rebate! I'll use it to stimulate the economy down here. That's what Bush wanted us to do, right, spend it?
(The rotundity of the steering wheel--aren't they called something else?--makes you look positively slim.)

hey rich, no time to follow up your ever interesting blog, but since you seem to be in europe or at least in the north, please check www.dmy-berlin.com, i have become part of the team and the festival starts on the 21st, but you#ll probably wont be in b, no? however, stay safe, love, stef

Anyhow, gotta love Oslo huh? Exquisitely beautiful blonds and death metal everywhere...If only I could afford to get 'em drunk (the blonds)