The Winter Journey, continued: Retribution of the Penguins 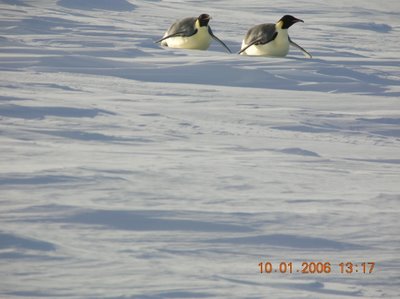 "The water may be frozen, but let's swim across anyway and take a look at those bizarre creatures in puffy red parkas." Photo: M. Deany


The Sunday before last, Sundays being most people's day off, the recreation department had on offer an outing to Scott's hut at Cape Evans. Since we had been there the day before, I didn't go, a decision I regretted when Deany described the trip to me the next day. En route, the group spotted a cluster of blank lumps spotting the otherwise pristine sea-ice just off tent island. These proved to be a curious group of nine wandering emperor penguins, which immediately approached to investigate the strange apparition of triple-height bright big red penguins emerging from an enormous orange Delta. Deany's photos were stunning, as were the videos. This group of emperors took no revenge on the alien daytrippers, for they were allowed to continue on unmolested; in fact they were still lingering about near the flagged route on the way back. 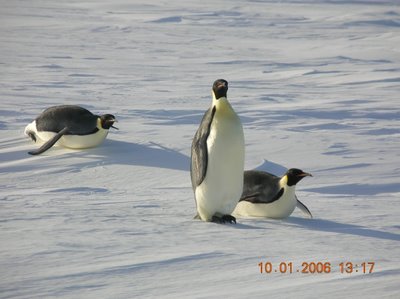 "Mess with us and prepare to feel the wrath of the emperor!"
Photo: M. Deany

Bowers, Cherry-Garrard and Wilson had less luck after raiding the Cape Crozier emperor colony on July 20th of 1910. "We turned out at 3AM and got the canvas roof of our hut, with the door piece, fixed on and built in and made safe with blocks of snow and gravel and rocks anchoring it all round," writes Wilson of the morning of the group's only successful visit to the penguin colony, after having trekked more than three weeks from Cape Evans. 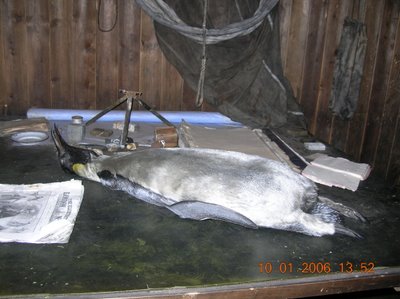 "We collected five eggs, of which only three unfortunately reached camp intact, and these split when they froze on the way home," writes Wilson. They skinned and flensed three emperors for their oil and clambered and staggered back to their hut, where they became blackened and greasy from the foul smoke given off by the blubber. Wilson almost went blind in one eye that night when he was hit by "a spirt of burning oil." 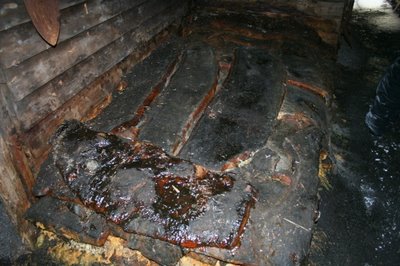 You never seem to have any seal blubber when you most need it: the stockpiled fuel at Cape Evans was of no use to the winter journey party at Cape Crozier. Almost one hundred years later a clammy, fishy smell still pervades the frozen foyer of the hut.


"Our first night in the hut was good save for my eye," he wrote the next day. But in the next sentence he adds "the wind rose to force 8 and had an effect on the canvas roof we didn't quite like the look of." To protect their tent, which they would need on the way home, they pitched it in the lee of the hut. On Sunday the 22nd, "it was blowing 9 to 10 with heavy drift and very violent gusts, and soon after this when Bowers looked out of the hut door he saw that the tent had been bodily blown away, legs, lining cover and all..." Two noncritical bits of the stove were swept away, but much of the rest of the gear that was in the floorless structure miraculously remained where it lay, and they quickly brought it into the hut. Wilson was not a man given to panic, or at least he was not a man who expressed much panic in his diary. Cherry-Garrard, in The Worst Journey in the World,

was rather more blunt: "To get that gear in we fought agaist solid walls of black snow which flowed past us and tried to hurl us down the slope.... There was no doubt that we were in the devil of a mess." But the relatively long term tragedy of the tent, whose loss would only become devastating when the men attempted to return to Cape Evans, was quickly forgotten as the storm continued to build, threatening their stone and ice hut, which CG refers to as an "igloo." That evening a pipe connection on the blubber stove melted, rendering it useless, and forcing the men to use their oil-burning primus. "We then settled that in view of the shortage of oil we would not have another meal for as long as possible," wrote Cherry-Garrard.

At this point one imagines the trio lying on their backs in drifted-in reindeerskin bags, fine drifting snow and black volcanic sand pouring through every crack and nook of their sieve-like igloo. The wind is raging, such that the canvas tarpaulin roof, which the men are imagining will serve as their tent on the three week trek back, is flapping with tremendous violence above their heads, steadily shaking loose the sledge and the slabs of snow that they had packed on top of it to secure it. It is Wilson's birthday, and he, unlike the roof of the hut, remains unflappable: "...quite the funniest birthday I have ever spent. The wind was terrific. It blew almost continually with storm force--there were slight lulls occasionally followed by squalls of very great violence, and at about noon the canvas roof of the hut carried away and we were left lying exposed in our sleeping bags without a tent or a roof. The storm continued all day with unabated vigour. There was no choice for us now--we had decided this before in the event of our roof being blown off--we had to remain lying there in our bags till the blizzard stopped." 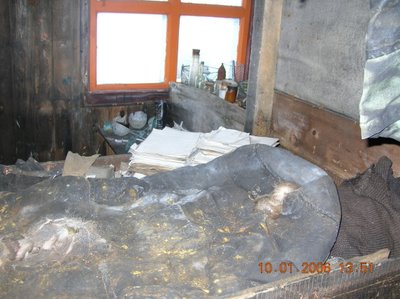 Warm and Cozy or Soggy and Frozen? You be the judge. A rather mealy reindeerskin bag left at Cape Evans. Photo: M. Deany

While Wilson was considering the hilarity of his birthday circumstances, Cherry-Garrard, beside him in a sleeping bag now half-buried by snow-drift and the fallen rocks that had once secured the canvas roof of the hut, focussed on the certainty of their imminent demise: "...when the roof went I felt that this was the end. What else could I think? We had spent days in reaching this place through the darkness in cold such as had never been experienced by human beings. We had been out for four weeks under conditions in which no man had existed previously for more than a few days, if that. During this time we had seldom slept except except from sheer physical exhaustion.... We had kept ourselves going by enormous care of our feet and hands and bodies, by burning oil, and by having plenty of hot fatty food. Now we had no tent, one tin of oil left out of six, and only part of our cooker. When we were lucky and not too cold we could almost wring water from our clothes, and directly we got out of our sleeping bags we were frozen into solid sheets of armored ice. In cold temperatures with all the advantages of a tent over our heads we were already taking more than an hour of fierce struggling and cramp to get into our sleeping bags--so frozen were they and so long did it take us to thaw our way in. No! Without the tent we were dead men." Having for want of fuel already not eaten for more than 24 hours prior to the roof blowing off, the men huddled in their bags, singing hymns and melting snow in their mouths to drink as days passed. Cherry-Garrard reckoned it force 12 winds, a full-on hurricane, ripping past them where they lay behind the low walls of their makeshift structure, now fully open to the elements. "The winds of the world were there, and they had all gone mad," he wrote. "I have never heard or felt or seen a wind like this. I wondered why it did not carry away the earth."

To Be Continued: Will our heroes survive the great tentless winter storm? Or will the string of bad luck that has plagued them since the snatching of the penguin eggs do them in once and for all?