Adding to the collection... UPDATED 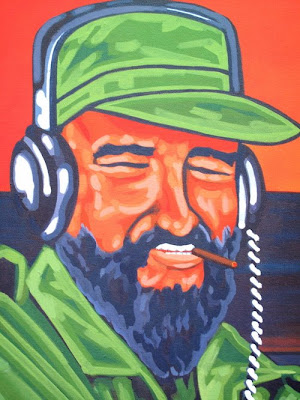 When embarked on obscure passions and pursuits it is always a joy to discover a fellow obsessive. One of the high points of a recent trip to Colombia to investigate the enormous mobile sound systems of the Caribbean coast was the discovery that this vibrant scene, in which deejays battle for the affections of the crowd from behind towering stacks of speakers, has a portraitist to immortalize their efforts on canvas. Dairo Barriosnuevo is a self-described music freak, but he is not a deejay; he is a visual artist who draws and paints his interpretations of the world and culture of the picó, as these sound systems are known. For some fifteen years the picó, their personalities, traditions, presentation, and history, have been his subject matter.

The picoteros are known and prized for their selection of music and for their brute auditory power, but they are also typically decorated with a vibrant popular iconography that evolves over time. When performing or competing, the picó display technicolor banners painted on thin scrims and hung before the speaker boxes. These are essentially self-promotional in character, images that hover somewhere between logo and mythology. Barriosnuevo does not (at least so far) decorate the picó himself. Instead, his paintings about them, while emerging from the same arte popular idiom, simultaneously celebrate and comment on the culture. Barriosnuevo sees the perennial competition between the picoteros as a kind of mock battle between titanic cartoon characters, comic-book superheroes, or manga warriors. He calls the picó "machines of war," whose weapons are sound and music.

Perhaps best known for what I might describe as his portraits of various beloved sound systems, a kind of fetishizing and even anthropomorphizing of the equipment itself, Barriosnuevo recently completed a new series he calls Heráldicas Picoteras. In these "heraldic" paintings, the sound system itself is no longer the subject matter. Instead the works interpret the icons of the various picó. They are therefore versions of the same sorts of paintings which the proprietors commission from a handful of specialist popular artists and have painted on their speaker grilles. "El Coreano," for example, has long been identified with a tank, charging into battle; the sound system was named in the 1960s in honor of the owner's nephew, wounded in action in the Korean war as part of the Colombian battalion that fought there, the only South American representatives of that particular US-led coalition. In Barriosnuevo's version the tank threatens to crush a frog, representing the hapless multitude of other, croaking picó, beneath its treads. His image of "El Conde," the count, depicts a seated, top-hatted patriarch, with all the imagined trappings of the refined, land-owning elite; in a tuxedo, he is seated on a gold-brocade armchair, with monocle, cane, and cravat, on a ballustraded patio, with the ancient city walls of Cartagena visible across the bay in the background.

"The Korean," "The Count," "The Guajiro" (which in Colombia has a completely different meaning than it would in Cuba, referring to the remote north-eastern province of Guajira, with its heavy indigenous population of Wayú Indians), and "The Supersonic," are just a few of the legendary sound systems Barriosnuevo has interpreted. Other sound systems are named for cultural or political heros: "El Gran Che," the great Che, is one now-defunct picó. Still in action today on the patios and terraces of Barranquilla is "El Gran Fidel." When I saw Barriosnuevo's painting of the same name I entered immediately into negotiations with the artist, and a few days later, arriving at customs at JFK Airport in Queens, I was able to have the following nerve-wracking exchange as I handed in my customs declaration form: 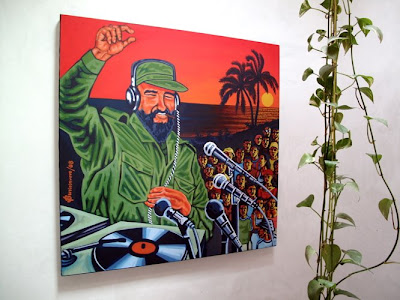 El Gran Fidel, restretchered courtesy of Atlas Industries, in situ back at the Red Hook ranch. 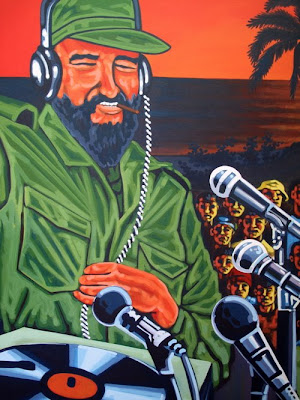 UPDATE:
Fabian Altahona, of the excellent Africolombia blog, read this post and was kind enough to send along a snap of El Gran Fidel ready for action, to illustrate what it is, exactly, that Dairo Barriosnuevo is illustrating. It is in no small part thanks to Fabian's blog that I owe my renewed interest in the subject of the picoteros and the phenomenon of African popular music as played throughout the Colombian Caribbean litoral. 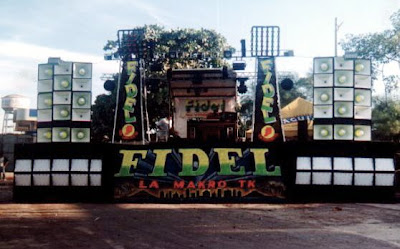 Thanks for this - viva la champeta!

PS-apparently there's a guy in Brooklyn called Geko Somethingorother that spins champeta, when I'm back from Colombia I'll check it out.

mbq
thanks, fellow traveler; i saw your post about brooklyn champeta lovers. more to follow; i have some interesting material from interviews with some of the inventors of the genre, like viviano (anne swing) torres and humberto castillo, who traveled to london, paris, lagos and kinshasa in search of obscure seventies afro vinyl, in order to ship it back to cartagena, "para fusillar..." as they say.