It's 2005, and Havana's greatest detective, Lieutenant Mario Conde, has long ago left the police force, having resigned in protest when his incorruptible mentor, Major Antonio Rangel, was made a target by the Department of Internal Affairs. In the Cuban context this means that the fictional Conde (the Count) has joined the great swirling, crowded whirlpool of the internal brain drain. The premature retirement of innumerable professors, teachers, doctors and professionals to become tour guides, translators, taxi drivers and waiters has been devastating to the Cuban state and the revolution. The abandonment of public service, and, often, the life of the mind, for the service industry and a chance to access the all-important tourist dollar has, fifteen years since the collapse of the Soviet Union and world Communism, sapped the revolutionary potential of an entire generation of Cubans. That Conde's creator, the Havana writer Leonardo Padura Fuentes, has seen fit to send his ace detective into "retirement" and out into the wilds of the dollar economy has weighty metaphorical significance.

Mario's disaffection for the police force and his perennially postponed aspirations to become a writer of "squalid and moving" tales leads him inexorably into a new career as a used book dealer. It is a brilliant choice of destiny on the part of Padura Fuentes, whose detective novels always transcend their genre. For the used book-seller in Cuba is not the enthusiastic recycler of ideas and the noble guardian of our literary heritage that we sometimes imagine him to be here. (Yes, we are also familiar with the drooling ambulance chaser, picking through the estate like a crow nibbling at fresh roadkill). In Cuba, to be a used book dealer means that one is an active participant in the exportation of the country's culture, history, and patrimony. A looter, a defiler. No Cuban wanders the bookstalls of the Plaza de Armas in Havana with the wads of dollars needed to take home a musty, leather-bound tome. The client, everyone knows, is an extranjero, a visitor who will put that priceless volume in a suitcase and spirit it away, out of the country, forever.

Padura Fuentes, whose work I've written about before, is only getting better at stacking multiple layers of meaning within the basic structure of the noir crime novel. Havana Fever,

as the UK-based Bitter Lemon Press regrettably insists on calling their translation of La Neblina de Ayer (the mists of yesterday), presents, like all of its precedents, at least one robust mystery to be solved, but the novel manages all at the same time to be a look back at the evolution and devolution of the revolution; an ode to books both as objects imbued with aura and repositories of wisdom, history, and inspiration; a chronicle of a ruined family and its satellite members; and a revelation of contemporary Cuban life. 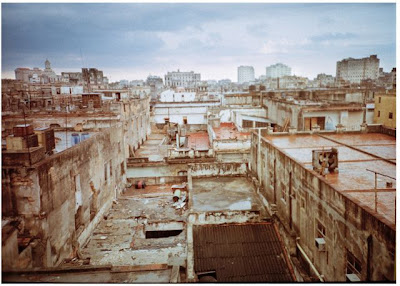 It is tempting, although perhaps excessive, to see in the vicissitudes of Mario Conde's progress a metaphor for the revolution itself. He is getting old, and is not as indestructible as he once was. The hangovers once cured with a shower and some thick, cheap home-brewed coffee now linger long into the grim day. He has grown skinny from scarcity and may be willing to do things he shouldn't, and once wouldn't have, to ensure his own survival. In Havana Fever even his trust in his own atheism has grown shaky:

Conde had come to suspect that the blend of aging and disillusion overwhelming his heart might finally cast him back, or just return him, to the fold of those who find consolation in faith. But the mere thought of that possibility irked him: the Count was a fundamentalist in his loyalties, and converts might be contemptible renegades and traitors, but re-conversion verged on the abominable.

In this novel he is battered, beaten to a pulp and left almost for dead, but he refuses to throw in the towel. Once, he was the most incorruptible of police officers, and then the most honest and plain-talking of book dealers, but the end of this thriller will find him stashing away a cache of Cuba's most prized publications on his modest personal shelf. And weeping.

I'm going to leave many of Padura Fuentes' plot threads unpicked, in the hopes that you will seize the moment and read Havana Fever for yourself. I'll reveal nothing of the elusive bolero-singing seductress who disappeared from the nightclub stage just as the revolution was dawning, nor of the wealthy, handsome Batista-hating Meyer Lansky crony who flew off to Miami, leaving behind a spectacular library but no forwarding address. Once one really starts to appreciate what Padura Fuentes is up to, the lurid details of the actual plot are merely a fine veneer on the surface of dense layers of allegory.

Let's concentrate on the library, and the books. The logical extension of Mario's career is that he quests after libraries; his livelihood depends on those same skills with which he once solved crimes, except that now he concentrates on locating fresh supplies of ancient texts. It is a difficult task. When I was in Cuba in 2001, walking through the island, I had the impression that already every last stick of antique furniture, every jeweled brooch, every Tiffany lamp and every mahogany mantelpiece had already been removed from the country. The woman at whose bed and breakfast I lodged in Havana had a regular client from Italy who specialized in buying diamonds passed down through the generations, stepping in whenever necessity overwhelmed nostalgia. He did not visit while I was there, but nonetheless a neighbor came around once, in the hopes that someone, anyone, might purchase her mother's wedding ring. It was a squalid and moving moment. Padura Fuentes conveys the dismal dynamics of this Havana used trade with pathos and economy: Conde, standing before a grand but tattered mansion he somehow has never noticed before, imagines that "someone must have already beaten him to it, because that style of edifice was usually profitable; past grandeurs might include a library of leather-bound volumes; present penury would include hunger and despair, and that formula tended to be a winner for a buyer of second hand goods." 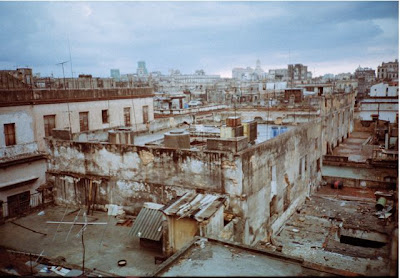 The brother and sister who inhabit this house, in which Mario Conde discovers the ultimate library, have already sold off “the noble bone china dinner services, repoussé silver, chandeliers...,” and it is only because of a solemn, fifty-year old pledge that the books still exist. But there they are, untouched except for their ritual biannual dusting.

The reverence with which Padura Fuentes has Mario Conde enter that chapel of reading and savor the spines of those all-but mythical volumes rivals the bibliomaniacal inventions of Jorge Luis Borges. Not since the Argentine master has a library been this breathtaking, important, and charged. Naturally, it is in this place that the clues to two murders await revelation. But here also is inscribed the entirety of Cuba and, perhaps, much of the author’s personal cosmogeny. Mario immediately spots the Alphabetic Index of Demises in the Cuban Liberation Army “from its rare 1901 single printing in Havana,” and The Coffee Plantation, which “Conde’s fingers caressed even more lingeringly.” These are apparently real, rare, books, but their titles alone illuminate the march of Cuban literature and history, from sugar and coffee to slavery and rebellion. Here, too, is a first edition of “El Negrero,” (The Slave Trader), by Lino Novas Calvo, which I bought a couple of months ago in a painfully crumbly acidic paperback edition from an online bookseller in Venezuela, because Padura Fuentes recommended it in a 2004 "ten best" novels list. This is not the only cross-reference to the Cuban writer's other work: The previous Mario Conde novel, Havana Black, opens with two quotes. The first, from J. D. Salinger, reveals the forgotten (by me, at least) template for Conde's now five-novel predilection for all that is "esqualido y conmovedora." "I'm extremely interested in squalor," Esme tells Salinger's narrator. Now, in Havana Fever, the battered Conde, during a semi-conscious reverie as close as Padura Fuentes has yet veered towards the postmodern, encounters Salinger in an orange jumpsuit, and castigates him for no longer writing. The second quote is from José María Heredia and relates to that feeling of grim but almost sexual anticipation for the onslaught of an impending hurricane, a theme Padura Fuentes has repeatedly made his own, but which also constitutes a pivotal moment in Alejo Carpentier's Explosion in a Cathedral, suggesting that the tense and frantic waiting for a deadly but purifying cyclone constitutes an essential aspect of the Cuban character. On the last page of Fever, it is a thin but priceless volume of Heredia's poetry that Conde gives to his beloved. As usual, it's all about the reading.