The final, belated third installment of a description of a sail from Newport to Mamaroneck

9/11/09
Somehow a day has gotten lost in the shuffle. It must be that our brief sail on Narraganset Bay was yesterday, the tenth, because the 11th was a drizzly gray day filled only by sitting around doing nothing. I was unmotivated to go ashore in order to walk once again Newport's strip of t-shirt shops and salt-water taffy purveyors, this time in the rain. I've determined that if we don't make a move tomorrow I will abandon Anthony, who is perfectly capable of single-handing Salomé back to Westchester County on his own. This will make for a grim and unfulfilled bus trip back to New York, but I can't devote any more days to hanging about in Newport Harbor. I don't tell Anthony that I am considering bailing out, however, since I don't want to influence his decision about whether the weather is or isn't going to be appropriate tomorrow. We think the winds will have eased off a bit and large swells will continue, but the forecast still calls for possible thunderstorms and a small craft advisory. We pass the day eating most of the rest of the food to be found on board, so if we do sail tomorrow there won't be much to snack on except feta crumbs and cilantro stalks. 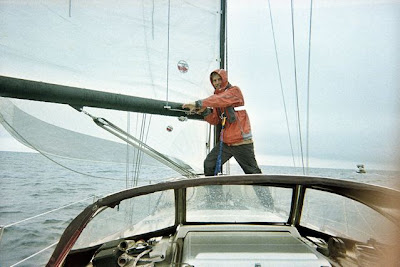 9/12/09
We decide to go for it and are up at 7, removing the sail cover and listening to the weather. The harbor is enveloped in fog. Our radar is not working, but the visibility seems to be about a mile and we conclude that we will probably be able to see any gigantic ships bearing down on us before it is too late. Moments later in Narraganset Bay a monumental Norwegian cruise liner powers its way in from the ocean, emerging out of the fog like a towering white skyscraper, but the image resolves in plenty of time for us to stay clear. Once at sea we are glad to observe a small flotilla of other sailboats heading west for Point Judith, suggesting that we are not the only boat to have decided that today is the day to make a move. 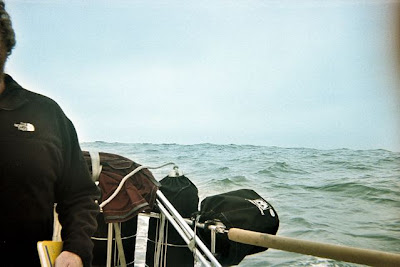 Bobbing in the mists, we find a nice breeze and are lifted gently over the rolling swells. These are a good six feet or more from trough to crest, but in no way intimidating. A friend has offered Anthony a free mooring and an evening of grilled vegetables far out on the north fork of Long Island, so we decide to head that way and get the train back into the city in the morning. The breezes are light, but at last we are sailing. After a few hours of slow progress we turn the radio back on and listen to the canned voice of NOAA, which promises steady north winds of ten knots in Long Island sound, blowing right the way through the night. On a sailboat slowly moving through the water there is little to do but endlessly plan and replan the immediate future, and speculate wildly about the more distant future ("My NEXT boat will be..."). If we can make it to "the race," the passage where the tide rips in and out of the sound, in time to catch some assistance from the current, we might just make it back to Mamaroneck, Salomé's home port, by around noon the next day. We determine to sail through the night, taking three hour shifts. 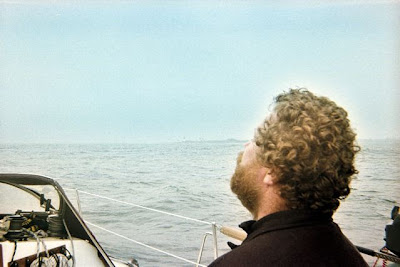 Anthony calls and cancels the barbecue and breaks the grim news that if we are to have any chance of favorable tides we must now motor for a couple of hours. I go below to nap and sulk, refusing to come back above decks until Anthony announces that we are through the race and the engines are going off. The wind immediately picks up, as if to welcome our green initiative. Then it really picks up, just as the sun is going down, and we wonder what we have gotten ourselves in for. The wind is off the rear starboard quarter and we can't seem to find a sail trim that will help Salomé hold her course--sailing her demands constant attention and course correction, and suddenly we are moving quite fast. Soon it is dark. The fog has cleared, but the cloud cover is so low that the towns and villages of Long Island and Connecticut are capped with blurry orange smears. Already visible at the far end of the sound is the biggest orange glow of all, New York City, projecting itself into the sky. Sailing, alone, gripping the wheel in the stiff night breeze while Anthony sleeps down below, I daydream about a reversal of the discovery of the Americas, and imagine Indians arriving in the America of today for the first time. Sailing down the sound as we are, without the experience of electricity, and certainly without a motor, they could only conclude that both shores of the sound are on fire. We are honking, doing between six and a half and seven knots. If the winds hold like we will arrive in Mamaroneck at dawn. I go below at about nine, and when I come back on deck to relieve Anthony we have already reached Middle Shoal. The hours between one and four in the morning are magical. One tugboat passes to the north of us, pushing a barge east, but it is the only other traffic to be found. I do my best to keep the boat in the dead middle of the channel. The temperature is perfect. There is no sound but the wind and the boat carving through the black water. Soon I am able to take my course from the distant beaded pearls of the Throgs Neck Bridge. When Anthony comes on deck shortly after four we are less than two hours from home, already sailing waters he knows well, easily visited on a day trip out of the city. At 5:45 we are high-fiving and, the engine back on, motoring up on Salomé's home mooring.


View Newport to Mamaroneck Sail in a larger map

After squandering vast amounts of time on Google searches and html manipulations, I have finally figured out how to implant a google map from the awesome GPSvisualizer into this blog. Look forward to viewing countless interactive maps of journeys you may never wish to take, plotted in extravagant detail. Note that you may zoom in and out and look at the trip at whatever scale you like. You may also click on any of the points marking the journey to read more of my snarky comments. 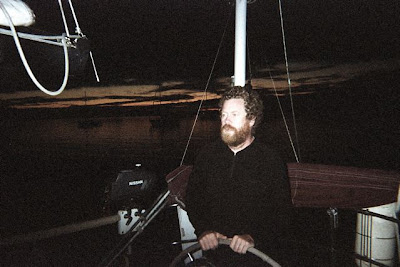