Does Google know what you are googling before you google it?

The consistently fascinating boing-boing has a post up about those little strings of anticipatory text that pop up once you start typing in your Google search window or search bar.  It seems there may be a lot to be learned about the habits and interests of your fellow humans through some amateur sociological analysis of these suggestions. Or maybe not. The original post, at predictably irrational, gives the impression that the content of these autofills emerges out of a kind of democratic sampling of the millions of similar searches carried out by all the other internetters out there. The further implication seems to be that the suggestions appear in order based on the frequency with which they are searched. This could all be true. I don't know, but beyond the plausible inference, I'm not sure there is any evidence. Certainly they have to come from somewhere. 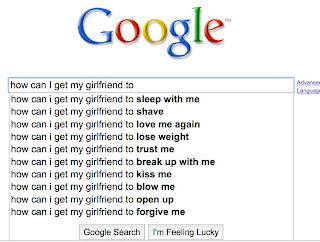 If pure democracy is at work, then, as one commenter pointed out, men across the nation and the world should certainly be embarrassed that the first suggestion offered to complete the search string "How can I get my girlfriend to..." was "give head." I tried this same search myself after reading the post and "give head" didn't even make the list, even if, as you can plainly see in the snapshot I took of my version, "blow me" appeared in position number 8. Presumably, the folks over at Google had so little to do today that they spent much of their morning reading boing-boing, then convened a meeting to discuss whether the term "give head" is or is not obscene and objectionable, and then had another meeting to determine whether to intervene and prevent this suggestion from ever again rearing its ugly... presence.

Despite my uncertainty about the origins of these suggestive strings of text, I was inspired to try out a couple more searches in the hopes that I might learn what the great mass of humanity is thinking: 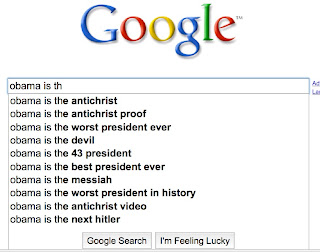 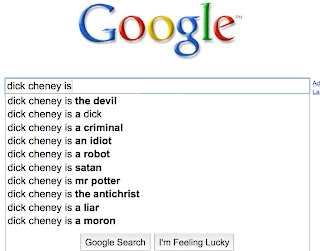 Even if the jury is still out as regards the actual methodology, it seems quite clear that everyone hates politicians of all stripes.