Tragedy in the Grand Rue

It seems almost impossible to contemplate that only two months ago I was in Haiti to write about the Ghetto Biennale, an international art event whose very existence I interpreted as representing a moment of comparative optimism for the country. My various blog postings on that brilliant spectacle, with links to some of the media outlets I covered the story for, are HERE.

The Grand Rue was exactly the kind of neighborhood worst hit by Haiti's ongoing series of earthquakes, a place dense with shoddy cinderblock construction, wholly ignorant of building codes. Building after building sprouted ersatz bits and extensions, tacked on into a dense cement patchwork, to house expanding families and country people driven to the city by the neo-liberal plan's near-total undermining of the agricultural sector. It was a claustrophic experience to walk this warren of nerve-wracking construction even without the most distant thought of hurricane or earthquake in one's mind. 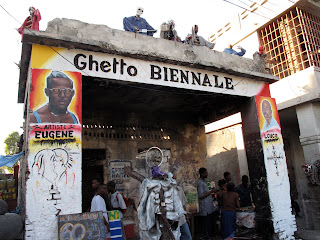 Is it good news, or bad news, that "only" one of the four Grand Rue artists was killed last week? Louco, whose portrait is just visible atop the right-hand column of this inviting entryway to the Ghetto Biennale, perished. May he rest in peace. 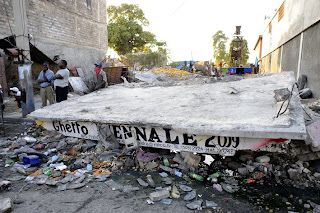