Who's gonna work, make the economy grow, if we all hang out in the street?
Well, I don't know, and I don't care, just as long as it ain't me!
Hangin' out with the street people, they got it down,
Hangin' out with the street people, just driftin' from town to town.
I wouldn't trade places with no one I know, I'm happy where I'm at...
Some people would rather work; we need people like that….
-- Bobby Charles 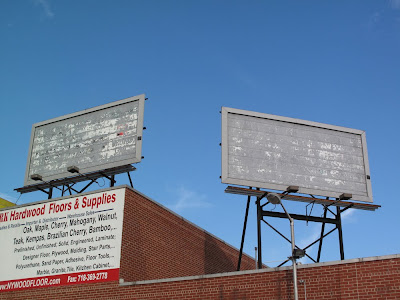 Nothing says "ongoing economic downturn" with quite the same forceful poignancy as a disused billboard. Gowanus is full of them, towering rectangles of dull gray tin spotted with the patchy remnants of abandoned advertising campaigns. At the moment the only message they are sharing with the motorists of the Brooklyn-Queens Expressway is one of empty failure. If there is a particular stage of global slump in which advertising is abandoned altogether, surely we have reached it.

Don't get me wrong, it's not that I wish these mute slabs were still decorated with glossy promotions for soft drinks and home improvement stores. I hate the damn things, and consider them an unconstitutional infringement on my right to enjoy unobstructed views and breezes, and to be free of unwanted visual clutter as I make my way along the roadways my tax dollars pay for. Billboards are nothing less than a form of pollution, and they should be banned nationwide, just as they are in Vermont. But in Brooklyn we have them, so for now I'll settle for finding them more evocative, meaningful, and even beautiful, in their messageless state. With their museum-quality enameled steel frames, these huge erased canvases make for a kind of vast outdoor art exhibition; in a different context the people with all the money might be drooling over them and writing fat checks. 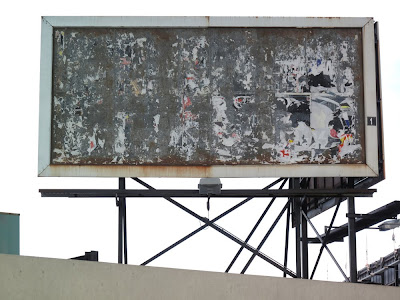 But in light of the current economic crisis I think it is also useful to consider these empty billboards as metaphors for not spending. We live in a country where consumer spending makes up more than 70% of GDP. Our economy would be worse than completely stagnant if we were to stop consuming enormous amounts of stuff all the time. This is what prompted Rudy Giuliani's silly remark in the wake of 9/11 that city residents should "go shopping," to prove that not even terrorists can keep them from their comforting, habitual activities. It is also why real efforts at environmentalism are perennially marginalized and disparaged. "Green" living isn't about whether your coffee filters are made from recycled materials, it has to be about radical constraint on buying and using and replacing, and therefore, radical constriction of the economy. Rampant consumption is essential to the current economic model.

Consumer spending, except for the sliver of it that can truly be said to be spent on absolute necessities, is essentially marketing driven. Absolute necessities are what they call in Latin America the canasta basica, the "basic basket" of so many grains of rice and loaves of bread and tablespoons of oil required for minimal survival; I'm not talking about iPhones. 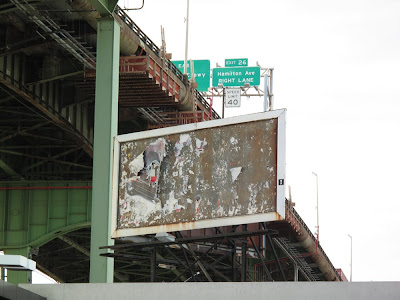 Except for the vast masses of the poor, people in general have lost sight of the once meaningful distinction between want and need. We have created a culture and an infrastructure in which what were once luxuries are now thought essentials. Given the chronic starving of public transportation in the United States, and the pattern of one hundred years of urban and suburban development, for instance, most now accept the personal automobile as a necessity. So, too, the cellphone. How absurd. Such things are pillars of our consumer society, but we prospered just fine without them. Worse, in order to justify ourselves and support this environmentally catastrophic model, we have very successfully exported (one of our last major exports) this aspirational, consumptive mode of life across the globe. 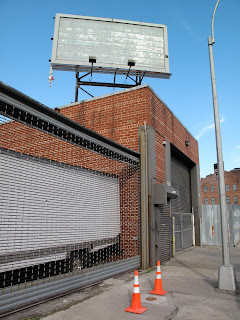 Advertising would have ceased to exist long ago if it were not effective. But because advertising is so loathsome, and because the creators of goods and services are naturally biased to believe that the market will recognize the superiority of their offerings without the intercession of anything so crass as promotion, many businesses ironically still look at it as a luxury, even as they use it to convey the idea that what they manufacture is a necessity. Given that consumer spending is in large part a creation of the advertising industry, the direct result of a marketing and media machine, what does a breakdown in the communication apparatus like the blighted billboards of Gowanus mean? 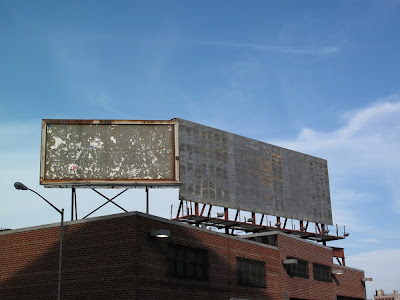 Is there a glimmer of hope reflecting off these dull gray surfaces? 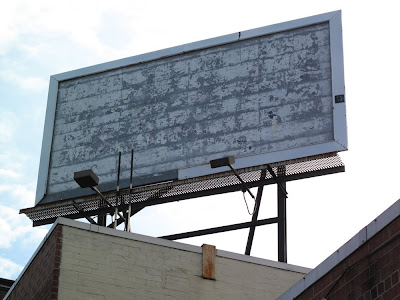 Blank slate for a new way of thinking. 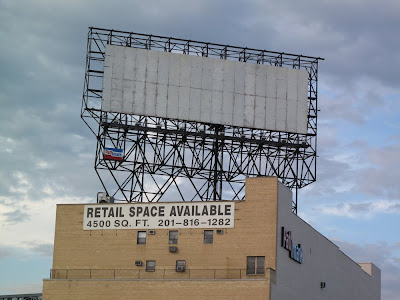 An advertisement for nothing. I'll have some of that, please.

Hi Richard,
I work in the ad industry. This post (it's more an essay, I should say) is excellent. Thanks.
Norbert, Tübingen, Germany