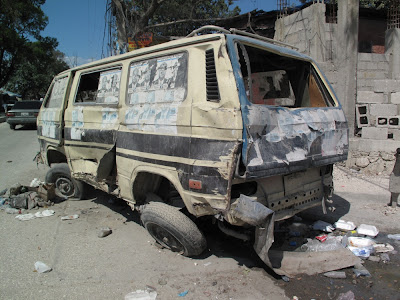 In Port au Prince, before the earthquake, living on the brink of disaster was the status quo for countless Haitians. Now, almost fifteen months after the disaster, life among the ruins is the new normal. The media tells us that half of the 1.5 million people made homeless have now returned to their former homes, or have found new ones, but wherever we drove in the capital last month it seemed that every vacant lot and public space was still crammed with tent cities. No major roads remained blocked with rubble, but I saw many buildings in a state of near-collapse, tilted and slanted, their poorly engineered concrete slabs jutting into the sky at all angles. They look, these former buildings, as if the earthquake had only happened last week. 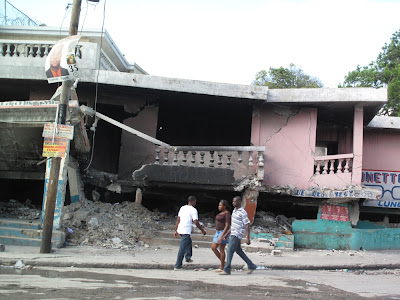 Not so the tent cities, which are developing a sense of permanence. The once grand, open expanse of the Champ de Mars, directly in front of the as-yet still undemolished, collapsed and impotent national palace, is full of tents, some now with reinforced walls of plywood and metal. It looks as if every last rusted tin corrugation, ersatz television antenna, tattered blue polytarp and urine-stained alleyway of a Rio de Janeiro favela had been teleported here and dropped in front of the equivalent of the White House. This is no longer a refugee camp, it is a community, complete with restaurants, bars in which to gather and watch television, hair salons, hookers, fried plantain salesmen, midwives, neighbors and hoodlums. It is all too easy to imagine that unless presented with a pleasant alternative, nobody is going nowhere no time soon. At the moment neither options pleasant nor unpleasant seem to be presenting themselves, despite the hundreds (thousands?) of NGOs that have flooded the city with housing schemes, feasibility studies, risk assessments and white SUVs. 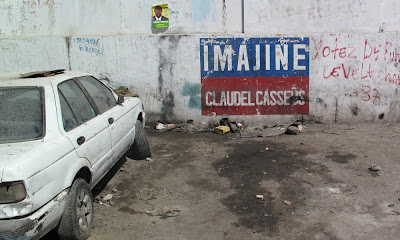 It is an unfulfilled cliché of development and aid work that the population being aided should, for best results, be consulted, involved in the process and invited to help shape its own destiny. But a recent literary project showcases, for me, just how rare it is for a Haitian perspective on the earthquake to take center stage. Imajine, by Claudel Casseus,

is not a prescription for relief or reconstruction, it is a personal narrative of how one Haitian man experienced the earthquake and its aftermath. Reading it makes one realize that our comprehension of what the quake was like is based on images, and on a few quotes from traumatized citizens collected and selected by foreign reporters in the days immediately following the catastrophe. It showcases, by extension, the limitations of the very narrow lens through which we view most international events, despite the potential of the internet to bring us direct reports from those affected.

Imajine is essentially a work-for-hire, produced, enabled and published by conceptual artist and musician Bill Drummond. But the words in it are those of Claudel Casseus, perhaps a typical underemployed, eager, brilliant and sometimes desperate Haitian young man. There are many like him in Port au Prince, people with vast unrealized potential, their creative possibilities and dreams squelched by racism, borders, corruption, politics and poverty. Nobody else, however, could have written Imajine.

As a participant in the December 2009 Ghetto Biennale, Bill Drummond painted the provocative and uncomfortably prescient slogan "imagine you wake up tomorrow and music has disappeared" on a wall in the Grand Rue of Port-au-Prince. Claudel Casseus steadied the ladder for him. In the days after the earthquake, less than a month after the triumphant finale of the biennale, participating artists, now back at their homes all over the globe, set up a master list and an email network to exchange news and reports of how their newly made Haitian friends and collaborators had fared in the earthquake. Nobody knew anything of Casseus' whereabouts, nor what might have happened to him. 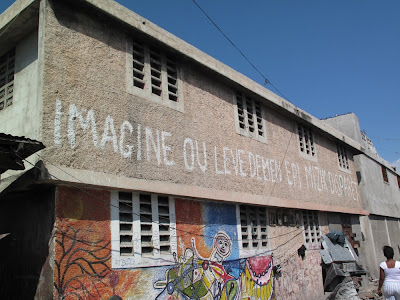 "Imagine you wake up tomorrow and music has disappeared."

Some two weeks later Bill Drummond's cellphone rang. Through the electronic fog he recognized Casseus' voice, but the connection was too bad and the language barrier too great for him to understand much more than the simple fact that his former ladder-holder was alive. He wondered how he could help, for surely that transatlantic telephone call represented a request for assistance. Drummond's answer to this question continues to elude many of the NGOs working in Port-au-Prince, despite its simplicity: if you want to help a Haitian in this nightmarish time, give him or her a job. Drummond proposed a work-for-hire, commissioning Casseus to write a five-thousand word account of how he had experienced the earthquake. Imajine is the result of Casseus seizing this opportunity by the horns; he spent countless hours in an internet café pouring out his memories in emails to Drummond. Ultimately, his account ran to some sixty pages. 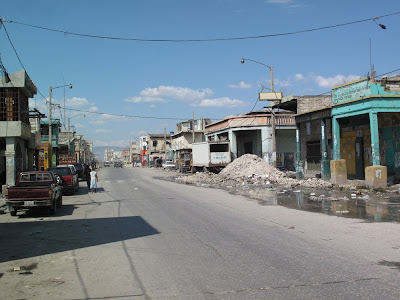 Casseus' descriptions of the psychological effects of the earthquake demonstrate the shortcomings of journalistic accounts, so often written by observers arriving on the scene after a catastrophe has already occurred. I remember reading in various stories that Haitians were traumatized and that many "refused to set foot in any building," and that this was complicating efforts to get people to return to their homes, but I didn't really understand the emotional depth of their sentiment until I read Casseus: "It was impossible to walk by a collapsed building without having the illusion that there might be someone under the rubble screaming for help. Sometimes it might be true and sometimes it might be just a vision that got stuck in your head. If you walked by a building, you can't help but think it is about to fall down on you or that you could have been dead under there if it wasn't for the grace of God and the Spirits."

The power of Imajine lies in the raw, unpolished delivery of Casseus' memories. Typing directly into a terminal in an internet café, the author had neither the means nor the technology to review and edit his own work. He simply let the words flow onto the screen and then pressed SEND, making this book the Zapruder film of earthquake memoirs. It is full of elliptical meanderings, digressions and repetitions, none of which manage to diminish the visceral quality of the writing. Profound truths and painful observations await the reader with each turn of the page. This gives Imajine a unique mode of narrative tension; you continue to read because at almost any moment you may stumble across a surprising thought or illuminating sentence. "This tragedy made me come to the understanding that we human beings are nothing," Casseus writes early on, "and that we should make good use of our time because we do not know when we are going to die." 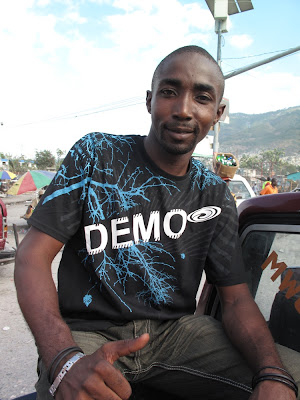 The deservedly proud author, Claudel Casseus, in the Grand Rue two weeks ago.

I got my copy of Imajine the best way one can acquire a book: I bought it directly from the author, who autographed it for me. It is available directly from Penkiln Burn, and also from Amazon.co.uk, but there are very few copies for sale in Haiti. I'm hoping on my next visit it will be available in every gift boutique in the airport. Ask for it, when you are there buying your duty-free rum.