Although on this last trip to Antarctica we were only "on the continent" for some three days, this blog is, after all, named antarcticiana, so bear with me as I squeeze as much mileage as possible out of the whole experience. And despite its flatulent length, that last Worsley entry ended rather abruptly, I thought. His book contains one juicy quotable morsel of rugged adventure after another and I just had to share as much as possible. You really should just buy the book

for yourself and save me quoting it every time I feel the need to serve up another dollop of Antarctic peril. Until that happens, however, you will have to put up with it. 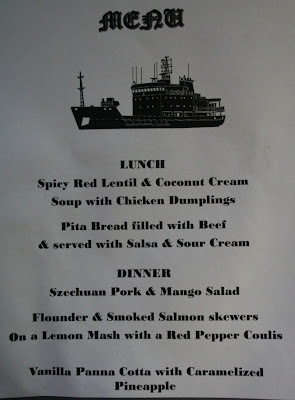 What passes for Hoosh on board the Alexey Maryshev. Believe it or not, after a week of this constant gourment overload we were begging for beef jerky and pop-tarts.

On each and every one of the great Antarctic expeditions on which English was the primary language spoken, the joy of mealtime in the frozen wastes of the deep south were summoned with one word, bellowed out by the cook: "Hoosh!" It is always the cry of "Hoosh" that brings the men running for their hot sustenance. Hoosh? Why, in the Antarctic literature in general, is "hoosh" a synonym for food? Is this archaic slang? Transplanted navalese, like the army's "grub"? An onomatopoeia derived from the hissing of a Primus stove? Until I read Shackleton's Boat Journey I was mystified, but Worsley provides an explanation. "Hoosh," he writes, "what a joyous sound that word had for us. A corruption of a North American Indian word 'hooch,' meaning a drink, but now used in the form "hoosh" for a sloppy food that can be consumed by drinking--not necessarily by inhaling."

Although all descriptions of what is actually in it sound revolting to anyone who has not spent their day freezing near to death, pulling a sledge of provisions over a glacier, or repairing a rowboat on an ice-strewn beach, whipped by stinging salt-slush, the word hoosh is used with reverence and savor in so many explorers accounts that one almost wishes one could taste some of the life-giving manna. 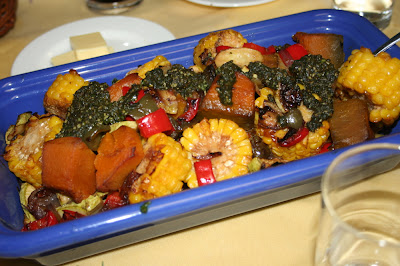 In Worsley's account hoosh is any pot of hot and soupy stuff. He lists the principal ingredients of their party's hoosh, which, he adds, had wonderful antiscorbutic properties: lard, oatmeal, beef protein, vegetable protein, salt and sugar. "It had the consistency of a new cheese and a yellow-brown color, but looked, when boiled with water, like thick pea soup. In cooking, the aroma of this ambrosia rose as incense to the gods. Any one of us would cheerfully have murdered a Chinaman for a pound of it. With a gill of Johnnie Walker it would have made a noble libation to Bacchus."

But supplies often ran thin, or out, and to the carefully prepared hoosh mixture was added any of a host of other ingredients that happened by: milk powder, penguin liver, butter, a shot of sherry, snow, seal blubber, pemmican, cutlet of skua, Xavier Mertz, baby albatross, elephant seal, pack dog, and old leather boots. 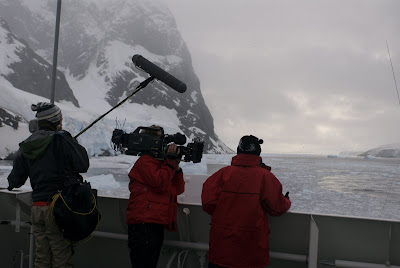 The intrepid crew working up an appetite on the "monkey deck."
photo: Alejandro de Onis