Yearning for a yurt of my own

A few years ago, while researching alternative housing, I spent quite a bit of time online looking into yurts. These traditional mongol dwellings are ideally suited to the nomadic lifestyle to which I seem, more or less by default, to subscribe. Warm, portable, comparatively spacious and cheap, yurts have a certain hippy appeal, especially in the Pacific northwest, where, to judge by the blogosphere, quantities of patchouli-burning yurt-dwellers are to be found living in harmony with nature. I imagined myself buying a small patch of upstate meadow and avoiding pernicious local building codes by erecting a yurt of my own. They are, after all, nothing much more than a glorified tent. Now that I've actually been inside a yurt this seems like an even better idea, one, perhaps, to be revisited. 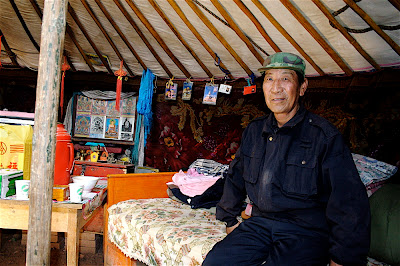 Ejina, here in inner mongolia, is the base for visiting the "Black City," the melted ruins of a Great Wall era desert outpost. The site, a walled city that was made of unfired clay, is an eery and rarely visited compound about an hour's drive out into the southern Gobi. Before clambering up a massive dune to the top of the city wall, we visited the lone guardian, a yurt-dwelling Mongol who invited us into his cosy spot. What I first noticed is how roomy the perfectly round space seemed, and how natural a shape the structure provided for socializing. Around the perimeter were two sofa-cum-daybeds, one presumably serving as an actual bed at night, and a variety of armchairs. The floor was dirt. A low woodstove occupied the place of honor in the dead center. Our man here told us through a translator that he can erect his six panel yurt in forty five minutes, although I suspect this would require assistance. 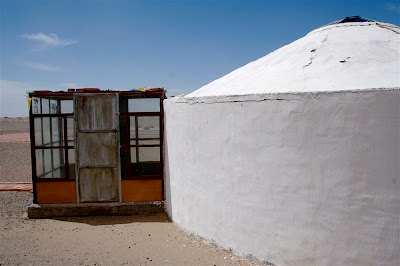 As the true nomadic lifestyles of the world have fallen into decline so too have the traditional ways of the Mongol camel herder. More common today than the archetypal felt yurt are permanent bricks-and-mortar (or, more likely, cinder-block and stucco) yurts like this one. I particularly like the glass atrium. 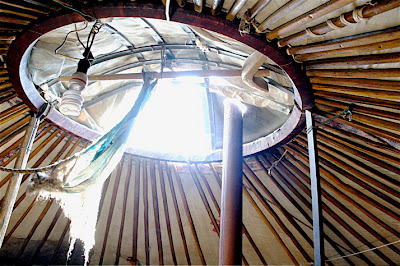 The apex of the yurt, its defining structural characteristic, and its only source of natural light, is a great ring into which the many, many radial roof supports are fitted. This itself is supported by two poles, in this case a wooden post on the left and an old length of metal angle, perhaps recycled from an abandoned bed frame, on the right. towards the center is the chimney for the wood stove. The windward side of the hole is covered over with felt; the downwind side is screened to keep out desert flies. Electric power is supplied by a small jury-rigged windmill outside; this yurt has a television, cell-phone charger, and the compact flourescent fixture seen here dangling from the central ring. 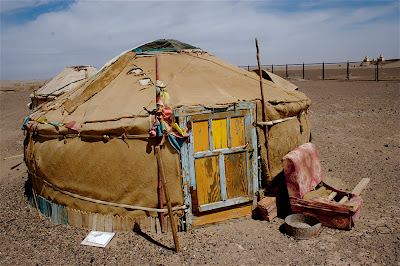 One downside to the yurt is the wall height, which is only a meter and a half or so, maximum. Entry and exit is therefore via a small, low doorway, the only other solid structural element of the building. This is a sort of Ozark or Appalachian style yurt: note the decrepit armchair on the front porch. 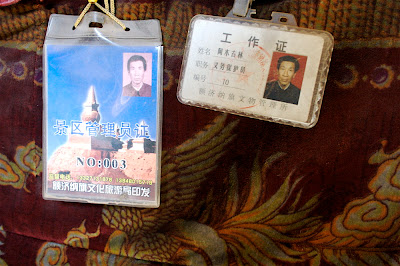 The walls of a yurt are made of layers of fabric; thick one or two centimeter felt on the exterior for insulation, opulent textured fabrics and carpets on the interior. 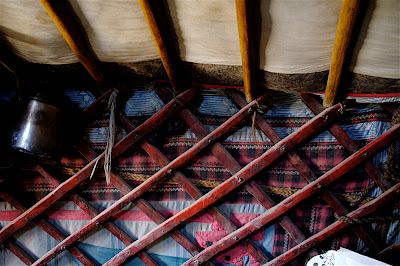 Yurts are measured by the number of lattice panels used to create their diameter, with most using either six, for a small yurt, or eight, for one rather larger. These fold down for transport in accordion fashion, like those wooden gates used to prevent small children from falling down stairs or entering unauthorized rooms. The roof supports sit in the cross-pieces formed when these lattice panels are unfolded, pressing down on them and thereby maintaining the integrity of the structure. The panels are bent gently into an inward curve, together forming the round wall. 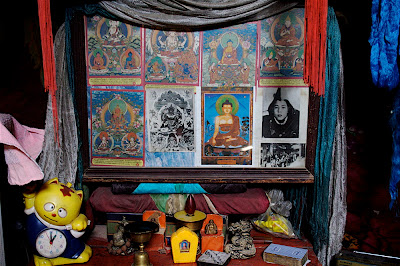 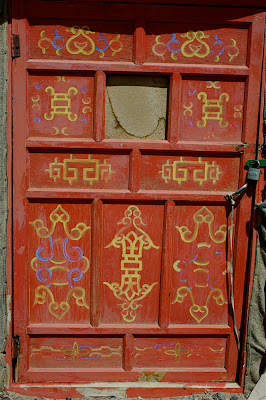 Decorative yurt doorway.
I hadn't expected a yurt to be so cosy. As Will Edwards, our camerman, put it, "I love wooden buildings for their warmth, and a fabric building, that's just a whole other level." The thick felt walls totally block the raging desert winds, even if during duststorms a sprinkling of sand does waft down through the shaft of sunlight coming through the roof. Inside the yurt it was positively dozy, the carpeted walls and comfy couches urging one to consider nothing more taxing than a long afternoon nap.

Another great post that puts the APs in the picture.

Thanks Rich,
the Ozark style one is what I had in mind. Would a camel be included in the price?
M.

No septic required on upstate yurts, unless you pour a slab, I think. But check with your yurttorney first...