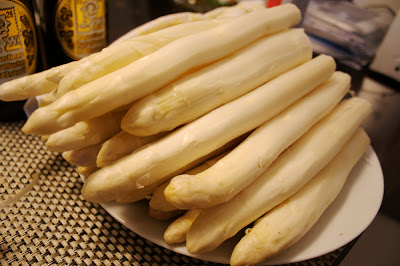 Here in Deutschland, the land of wurst and beer steins, the annual eating of white asparagus is a culinary cult that sweeps the nation from late April right through to June. These special spargel, thick, white, fat asparagus stems grown underground to prevent the development of chlorophyll, are considered sweeter and more delicious than their generic green cousins. In May in Berlin no restaurant is without a spargel-special on the menu, and the street markets are filled with tables displaying fearsome arrays of this ur-phallic vegetable, inevitably considered to have astonishing aphrodisiac qualities. The very best specimens, for want of a better word, run up to twenty euro the kilo. Spargel is expensive because its subterranean cultivation is labor-intensive; it is fragile and must be dug up and picked by hand. During the harvest hordes of Polish migrant workers are bussed in to gather up the spears. Despite the vegetable's cost, the annual season of the aspargus brings smiles and laughter to an otherwise taciturn and serious German people. 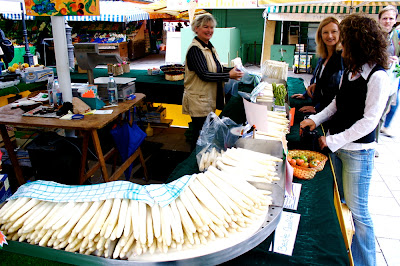 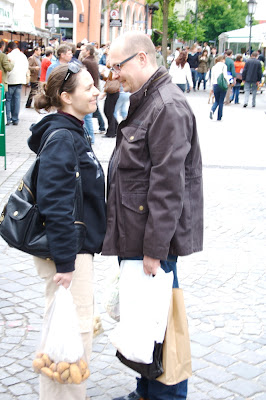 AK718 and everfred bask in the connubial joys of spargel-shopping after a successful two kilogram score. Note the bag of spring potatoes, which always accompany the classic plate of spargel

I've had the good fortune for several of my visits to Germany over recent years to have landed me smack in the middle of the sparglezeit, and this year is no exception. Upon my arrival in Berlin, at an Italian restaurant in Mitte, a festive group enjoyed fresh spinach tagliatelle with a spargel and speck alfredo sauce, while earlier in Munich, at home with AK718 and everfred, three of us feasted on spargel wrapped in ham and drizzled with baerlauch pesto, a garlicky invention of mine and my good friend Mareike's, with whom I enjoyed yet another spargel-essen two nights ago at the legendary Prater, a biergarten in Prenzlauerberg the size of an olympic swimming pool. 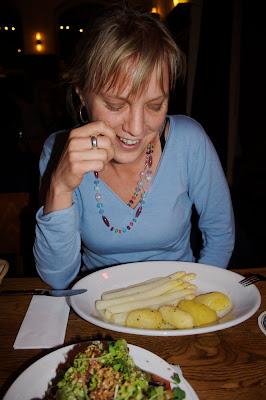 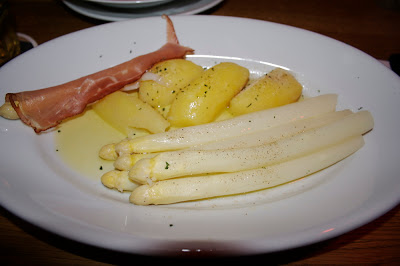 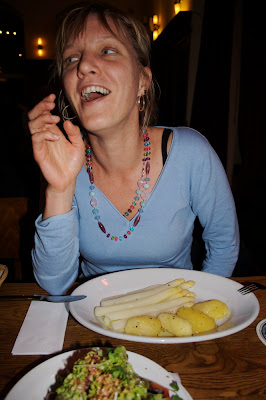 
One hopes that overexposure to the spargel cannot be dangerous. All things in moderation, my grandfather used to advise, but at the moment I feel rather as if I am turning into an asparagus spear. Just as the green ones do, white asparagus give the genetically predisposed a powerful olfactory reminder of the previous night's consumption: the solemn occasion of the subsequent morning's evacuation of the bladder is accompanied by a sharp, tangy odor, reeking, as it were, of toxicity. No culinary morning-after experience save a vicious hangover provides quite such a vivid reminder of the last evening's excesses as spargel-pee, but despite the pong whatever chemistry is happening is apparently harmless. 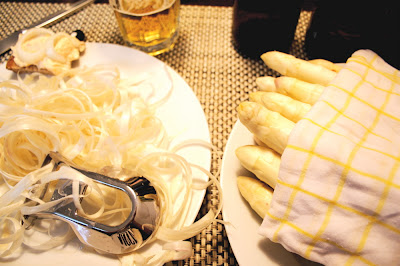