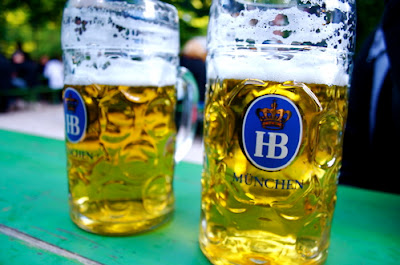 Although it is not Oktober, no visit to München would be complete without an authentic beer garden experience, and so AK and I dutifully cycled over to the "Chinese Tower," one of Bavaria's most notorious, high-volume opportunities to trade your hard-earned euros for a full bladder. The hip people in Munich (both of them) consider the Chinese Tower to be a hideous touristic display of all the worst elements of south German culture, but we think, of course, that it is never the wrong time or place to drink crisp gallons of beer in the afternoon sunshine. 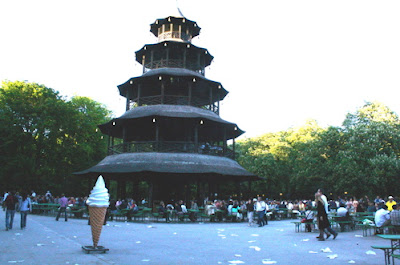 We all associate pretzels, beer and hotdogs with German culinary culture, but two beastly wars in the last century seem to have eroded America's full recognition of the cultural debt due our sometime enemies. Pouring down the liters and devouring delcious barbecued ribs as the oompah marches of the brass polka band wafted out from the second tier of the tower, I realized that, except for the lack of a couple dozen guys booting a pigskin up and down a field, I was at an American college football game. The combination of binge drinking, bad music, worse singing, and chicken and ribs drenched in molasses and mustard sauce reminded me of numerous Saturday afternoons back at the alma mater, so that the visit to the Chinisische Tor left me with a newfound appreciation for just how very much we owe to the German nation for providing the firm tripod of beer, grease and polka on which the collegiate experience sits. 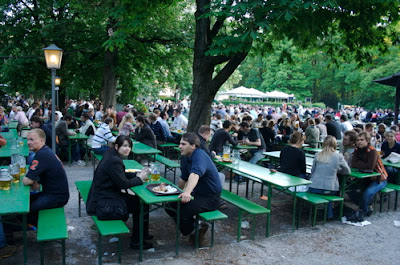 Many litres meet their demise at the acres of green folding tables in the shadow of the Chinese Tower. 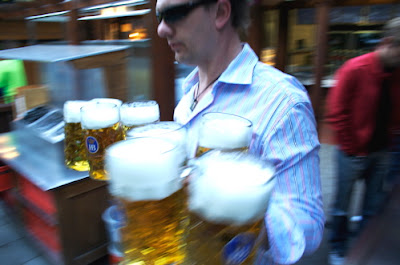 This dude is schlepping twenty pounds of beer, and that's not including the mugs. 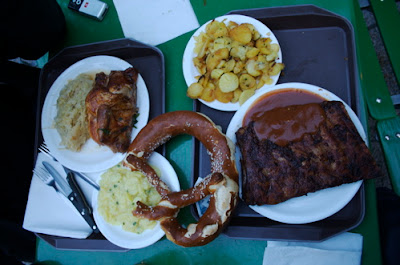 This worthy, and indeed his entire table, "livened up the joint" with a constant patter of drunken singing, asynchronous chanting that may or may not have been football (soccer) related, and various other embarrassments. Standing up and removing his shirt and then thrusting his pudgy arms in the air in triumph, as if the other thousand of us enjoying our pints had been waiting desperately for just such a display of sweaty corpulence, this brilliant specimen attempted to down a full liter of Munich's finest malted hops, funnelator-style. His table cheered him on at first, but when he interrupted his chugathon with a brief pause for air and sanity he was rewarded with a cascade of soggy french fries, crumpled napkins and cigarette butts, lofted towards his round, taut belly from every corner of the garden. 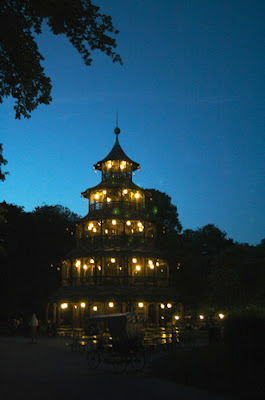 As Sarah Wheeler puts it in Travels in a Thin Country,

"the deadly combination of hot sun and cold beer conspired to cause the afternoon to evaporate."

my dearest friend, it is people like you who keep the myth alive on the north american continent that all of germany is living this kind of life. as a woman from the north of germany and now living in berlin i BEG TO DIFFER a bit more, regardless of what you did during your college years it is more then beer and spargel going on here....love, s.

dear stef
how many times did i have to mention bavaria, munich, "the south," "north carolina," barbecue, and so on for it to be clear that we are not talking about "the north of germany" here...

And do not forget that Bavaria still considers itself to be the Free State of Bavaria, as it is proudly displayed on large signs along our internal borders. And yes, you can make direct comparisons to the Lone Star mentality. As long as you keep mentioning the superior quality of our ribs, porks and chickens...

never mind, gentlemen, but living in ny during the early nineties i've been asked if we have computers in germany and ever since i am not sure about american people and their way of perceiving information....s

Actually, do they have computers in Germany?