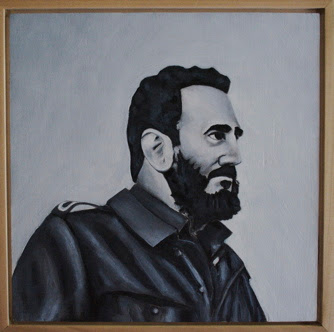 Regular readers have had ample opportunity to read my bitter, middle-aged gripings about the ruination of the lower east side by an overabundance of faux-european watering holes and the wandering weenies who clutch their hipster guidebooks while stumbling through the neighborhood from one poncey boutique to another, leaving a trail of gentrification and American Express Gold card credit slips in their wake. For curmudgeons like myself, of course, the glory days were long ago, no matter how old you are; if you are too young to have been there, well, too bad, it was better then. Before I moved away. More real. More authentic. More dangerous. More fun. More like Bushwick. At that time Clinton St., now a three-block-long restaurant row of overpriced finesse, was an open-air narcotics Wal-mart, an endless parade of slow, trolling cars, surreptitious palmslides and the flashing of green paper and yellow butane in gloomy bulb-smashed alcoves. In 1989, with the exception of one or two grimy Mah-Jong parlors and the Parkside Lounge, a blighted inner-city whiskey-shooter ballasted by a resident handful of crumpled puerto-rican geriatrics, there was scarcely a bar to be found in the entire district east of the Bowery and south of Houston street. Now, of course, there appear to be hundreds, and the once urine-streaked tenements have been done up with aluminum and glass storefronts. On Ludlow St. one of the pioneers of this pernicious process was Max Fish, where, gentrifiers all, my cronies and I spent far too much of our leisure time through much of the early 1990s, acting artistic.

In fact Max Fish was (and is) the center of a thriving arts scene; it's just that the staff on the side of the bar where they keep all the bottles was more prolific, more dedicated and in every way more serious about actually making art than most of those who were warming the stools on the other side. Over the years a number of wonderful artists paid their dues schlepping the ice-tub there; some of them are still at it. At Max Fish, if you wonder after the whereabouts of your favorite bartender, you are more likely to learn that they are off on a sculpture retreat in the Berkshires, in Oregon teaching a seminar on print-making or at an artists' colony in Canada, rather than vacationing on a tropical beach somewhere. The bar also serves as an art gallery, with monthly shows, some curated by bartenders. I hadn't been by in a few years, but the prospect in late April of an imminent Swipple group show offered the promise of a reunion of sorts, so a handful of us Brooklynites put principle aside and headed into Manhattan on a purely voluntary basis to go to the opening.

Swipple is a sort of loose association of artists with a strong online presence. Founded by Jason Wright, himself a former Max Fish pourer, Swipple has curated and put on group shows of Swipple artists on both coasts and even in some of the flyover states. Although having made drinks at Max Fish is not a prerequisite for Swipple membership, those who have put in time on Ludlow St. are well represented in its ranks. Many associates from the golden age of the lower east side have dispersed across the continent, and new artists unknown to us have been added to the Swipple fold, but the extravaganza at the Fish did not disappoint. The crowd was filled with familiar faces. Peering at those who some years ago had existed on the edge of acquaintance was slightly disconcerting in that one wasn't quite sure who in the crowd had come back and who might quite possibly never have left.

Jim Damron, however, I knew had decamped some years ago to an unknown and isolated frontier somewhere in central California. It was immediately obvious from one glance at the wall that the bucolic isolation of his self-imposed exile has refreshed and invigorated his painting and that while toiling away in the wilds of the tomato fields or whatever, he has made great strides as an artist. His portrait of Fidel Castro positively leapt off of the wall at me, and the few minutes it took between spotting it and determining from Jason Wright that it had not yet sold were fraught with anxiety. Fellow Brooklynite and chief boon crony Joseph, himself yet another former cocktail stirrer at the Fish, now turned real estate mogul and furniture designer and the (currently and only temporarily) faster half of the Atlas Cycling Team, was much taken with Damron's masterly portraits of Galileo and Newton, and suffered similarly stressful moments. (A slideshow of the entire show and even a photograph of the festive opening can be seen here.) Luckily we had arrived early. It took us no time at all, like emigrants made good returning to a little mexican village in fresh Nike sneakers, to demonstrate that we have thrived, at least financially, in the outer boroughs. Whipping out mountains of cash and slapping them on the bar in dueling piles, we then rubbed our palms with glee as Jim Damron himself affixed little neon-orange "SOLD" stickers to the sheetrock walls beside our new purchases. 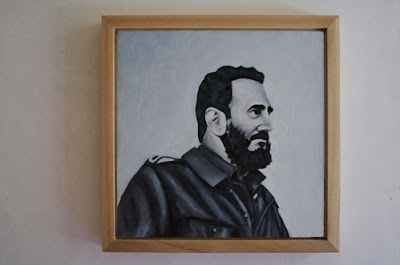 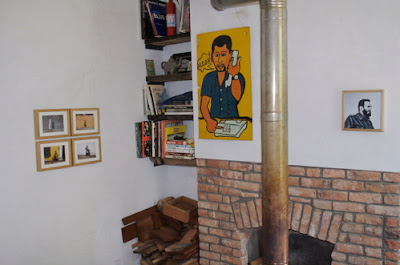 Fidel in situ, back in Red Hook, Brooklyn

Meanwhile, twinkling on the café tabletops were examples of another Damron masterwork, the "Fertility Light." Small, glowing, battery operated lamps made out of recycled Beech-nut baby food jars, they are the sculptural equivalent of a doodle. At only $25 dollars a pop I felt these were such a steal that in my infectious enthusiasm I quickly convinced a number of attractive young ladies propping up the bar that their lives would be incomplete without owning one. It was only then that I realized to my horror that I had single-handedly sold out the entire world supply of Damron votive lamps without managing first to secure one for myself!

Now that Jim, safely back in California, has managed to supply me, I feel feel much better in urging you to get one too. 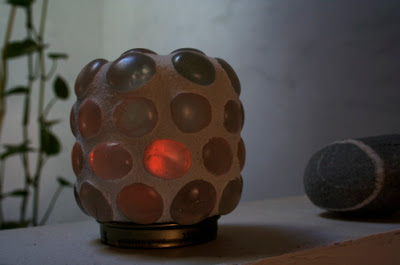 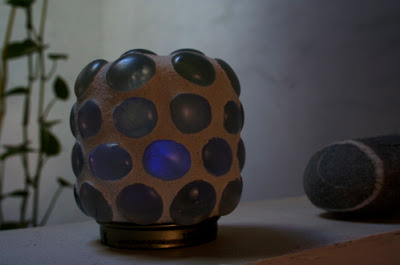 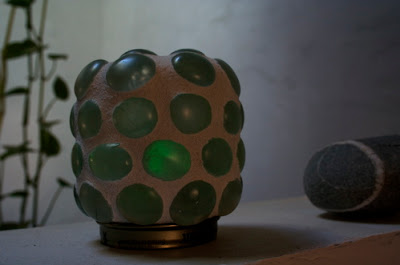 Three of the many moods of the world's coolest lamp, my Jim Damron "Fertility Light," Red Hook installation view. The Swipple Website warns: "May cause birth control failure."

You make me proud Richard and the story of the mean streets is spot on.

There was one summer in the early '90's in particular where there was a couch on Ludlow and all the Australian amazon girls would hang out watching skateboarders zooming off a little weenie launch ramp and it was mor fun to hang out on the sidewalk than inside Max Fish...

cool decorations rich. you'll have 2 help me pimp my room in paris!