Um, okay, sure I'd like to go, but maybe not with that guy 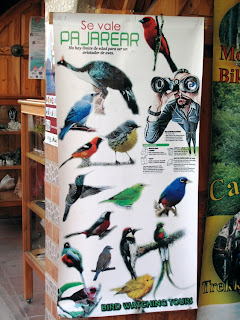 For the last couple of decades eco-tourism has been touted as the potential savior of third-world economies on at least three continents. Birdwatching is a key staple of the industry. But when I first came to Guatemala twenty years ago, wandering the countryside with a pair of binoculars was a risky enterprise. The so-called "internal armed conflict" (a current euphemism for the genocide attempted against the majority Mayan highland indian population in the 1980s) was still very much underway, even if its worst atrocities had happened a few years earlier. One risked being thought some sort of gringo military operative. The message that crazed birdwatchers would pay handsomely to wander off the beaten track in war zones just to see small feathered creatures had not yet gotten through to the authorities, who regarded with suspicion any foreigners using high-quality optics. That seems to have changed, to judge by this poster, seen in Panajachel a couple of days ago. It aims not only to entice existing birdwatchers with the splendors of the local avifauna, but to promote the hobby to those unfortunate enough to be not yet infected. "It's worth Birding," gushes the header. (Although I've heard pajarear come out of the mouths of Latin American bird guides, this is the first instance I've seen in print of this invented verb, a direct Spanish translation of the invented English verb "to bird.") How thrilling! Tell me more. Further down are diagrams of the basic equipment, the binoculars, notebook, and field guide, and this excellent advice: "don't make noise, (wear) lightweight clothing in neutral colors, stay on the trails, never approach nests, and go between 5:30 and 9:00 AM." But I have to wonder how many of the unconverted find this seductive.

My favorite part of this promotion is the graphic of the avid birder, who looks like a cross between Fidel Castro and a peeping Tom, with fatigues, and tiny feet. What guidance was the artist given? Was he or she asked to sketch someone ecstatically looking through binoculars? Between the psychotic swirls of his goggle eyes and the red lips pursed in surprise, this birder looks, I'm afraid, like the same inexplicable and demented gringo who might have aroused the suspicions of the military in the dark Central American '80s. Suggesting, I think, that even if the economic value of the birder has been registered, the pastime remains deeply mysterious. 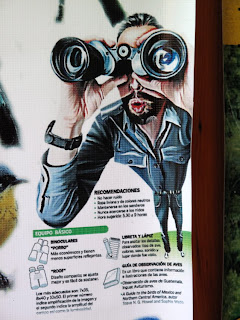 I think it's the famous dilatador albugo, very rare.