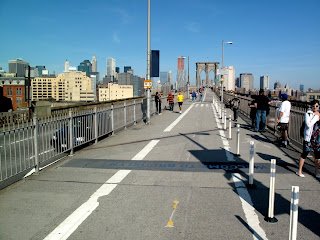 In my ongoing delight with all things New Orleanian I jumped on the bicycle this morning and took a ride up to the Brooklyn Bridge, where a NOLA-style Second Line parade was advertised for 10AM, "giving the Big Apple a taste of the Big Easy." At the Brooklyn end of the walkway various NOLAphiles were already in evidence, sporting Saints t-shirts, Mardi Gras beads and the parasols that are twirled during these traditional parades. For those that don't know, a Second Line is a celebratory parade in which dancers lead a growing and organic throng of marchers through the streets of New Orleans, invariably accompanied by a brass band (the actual "second line" [Oops, apparently only sometimes: see the comments, where my good friend CP, NOLA historian extraordinaire, has kindly checked in to qualify this observation]). Second Lines are often organized as memorials, or as part of funerals. The most ornate and well-organized showcase the various social aid and pleasure clubs, black fraternal organizations which provided emergency loans and assistance to the post-slavery Afro-American citizenry, attempting to counterbalance the almost total lack of any social, civic and banking services extended to them by the ruling white elite. 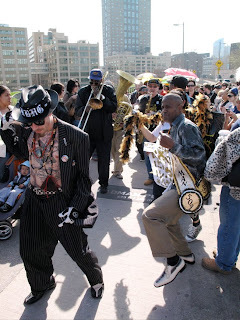 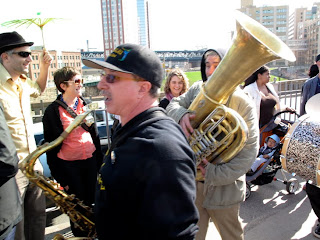 The Brooklyn Bridge Second Line seemed to have no particular purpose beyond an expression of pure and communal Easter weekend joy. Under a piercing blue sky a small troupe of musicians and dancers tromped and pranced up the boardwalk, to the bemusement and smiles of gaggles of international tourists taking advantage of the New York's greatest single free attraction, a Saturday morning stroll across the bridge. 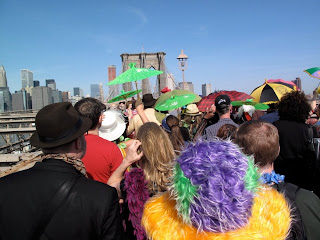 It was an event that, it seemed to me, could scarcely have happened without facebook and the recent revolution of social media. Would the hundreds of strangers gathered there, united only in their Mardi Gras memories or one-time residencies in the Crescent City, ever have responded in such numbers to an announcement on the back page of the Village Voice, or flyers posted on telephone poles? Unlikely. In the barrage of tweets and links that descend each day I can't even remember exactly where or how I stumbled onto the news, but there I was, and what a delightful East River spring morning it turned out to be! 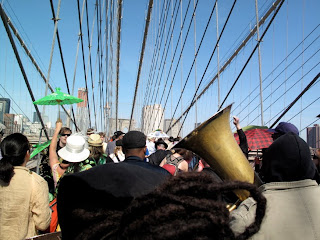 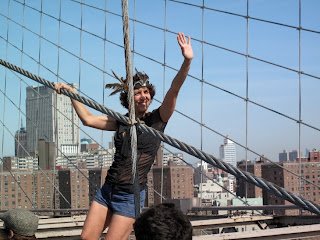 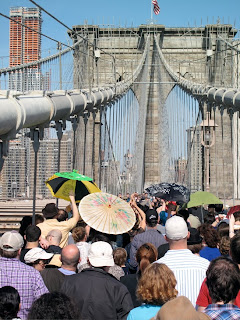 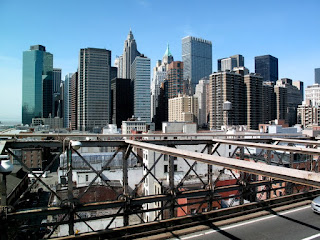 Good times dancing to a live NOLA-style brass band marching across the Brooklyn Bridge. Here's my own short footage of what it was like.

I gotta say it, but the second line goes both ways. If a SA&P Club, they are the first line, accompanied by the band, followed by the second, though band considered second is also valid. For funerals, the body is the first with the band, followed by the second. This is told forty different ways of course, but the thees that jump in tend to compose the second. Historiography is a bitch; see also Jerah Johnson's "Jim Crow laws of the 1890s and the origins of New Orleans Jazz: correction of an error." Popular music 2000 vol. 19/2 (I'm not correcting or asserting I am right, there is just a gazillion repeats on takes...)

My take on it is that the 2nd line is the group that forms either behind or along side of the SA@P members and band. Basically, it's the hangers-on and wanna bes, who're not really "official" participants.