An Afternoon Amongst the Pecten Gravels 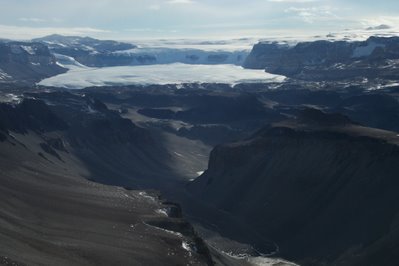 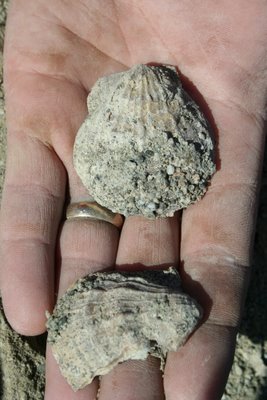 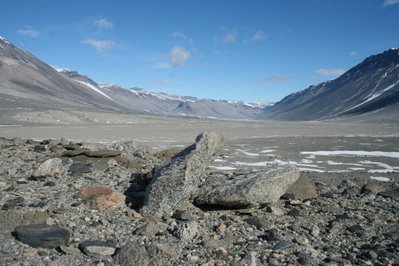 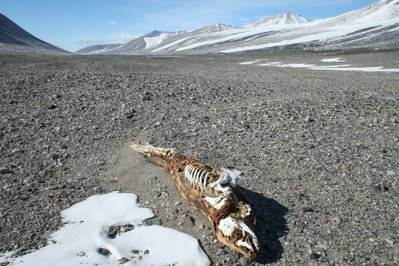 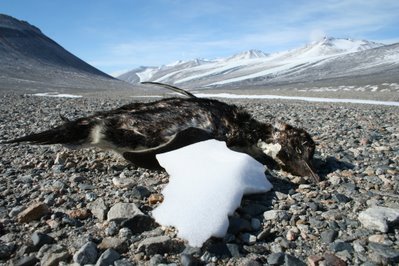 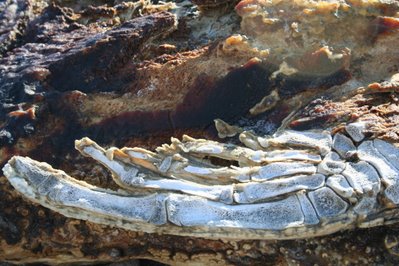 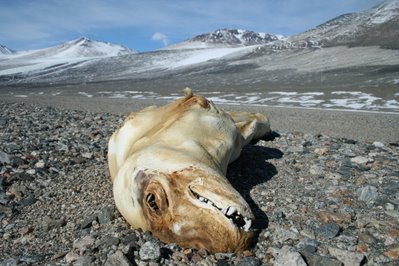 Took yet another helo flight yesterday, to visit Prospect Mesa and the Pecten Gravels. Prospect Mesa is a strange remnant hill in the valley carved by the Onyx River. Geologists seem to like strange remnant hills. And Prospect Mesa, once you start looking at things from a geological perspective, is truly bizarre. Over countless millenia, the river, Antarctica's biggest, although it only has water in it for something less than two months a year, has carved a broad, flat, gravelly channel. But somehow, despite the passage of glaciers and at times, river water, the Prospect Mesa has avoided erosion; in a vast, uniform, bowl-shaped valley it pokes its way up from the valley floor, a lone anomalous hillock surrounded by dry streambeds. That glaciers and streams have left it unmolested accounts for its interest to geology. On one side of it, where the helicopter put down, was an old geologists' trench carved into the side of the hill, and a battered wooden stake on which someone, in a bored moment of extreme camping, had burnt in block capitals the letters "PECTEN."

The geologists began to dig and poke about in the trench. I was with them on a sort of personal boondoggle; we had not come to film, and in fact I was the only one of the film crew along for the pleasure ride. There was not enough room in the helo for all seven of us (the four geologists and three documentarians). Sylvestre and I might have overcome this logistical hurdle by going along just the two of us and filming without the presence of our fearless leader, but that would have left Anne all alone in camp, which is forbidden by one regulation or another. So it was a bit like one of those brain-teasers in which a virgin, a wolf, a mailman, and a rabbit arrive together at the edge of a river only to find one lone rowboat big enough for only two. You know the rest. With no geologists in camp there would be little need for my services, so Anne and Sylvestre decided to take some silent Antarctic landscapes, leaving me free to tag along on the helo ride. (I am a sound recordist, not a silence recordist, I explained to Anne). When we arrived the geologists were no doubt disheartened that a big, strapping youth like myself did not pitch in to help them dig out the twenty-year old trench, but I blame Anne for their disappointment; she hadn't told them that I have a "no-digging" clause in my contract.

Instead of digging, I hiked up the riverbed. It is one of the first geological features I have seen here that reminded me of the other, outside, world. Specifically, the dry and sandy bed, reminded me of the parched oued which bisects Tamanrasset in the algerian sahara, except that that river is full of ruined black shopping bags snagged on thornbushes, and dotted with dried clumps of camel dung. Here an obvious channel wound its way through the gravelly bottom through small drifts of blowing snow. There were even, in a few places, icey bits, as if the stream had frozen solid last season before all the "summer" water had trickled away and down to Lake Vanda.

I found no camel dung, but only the cryogenisized carcasses of several generations of seal suicides, dotting the valley floor. And an intact, dead, Adelie penguin. What makes them do it, Deany? What urge forces these marine creatures to abandon their beloved sea-water and trek uphill and inland to their inevitable deaths? Are they searching for new breeding grounds? Are they aged or infirm individuals slinking off to die, like geriatric eskimos? Have they, like the invalided Titus Oates, who walked out of Scott's tent and away into his sacrificial blizzard, saying "I may be gone for some time," determined that they are too great a burden on their communities? Have their internal compasses gone haywire? It is not as if they have taken a simple wrong turn away from the colony. Where we touched down beside the Prospect Mesa must have been some fifteen miles from the Ross Sea, and my GPS recorded 150 meters above sea level. Furthermore, the Onyx River flows west, away from the sea, so these mummified corpses had, in life, crossed over higher ground, a pass, or at least a saddle, in order to get here. On a four-mile walk up the riverbed I found seven bodies in various states of very slow decay, but seals do not kill themselves in this way as frequently as I make it sound; the freezing conditions preserve their bodies for decades, even centuries, and some of the dead might have been lying still where I found them since Titus Oates' valiant last hike.

When I returned I found the geologists happily wallowing in pectens like so many hippopotami in a Rwandan pond. In their joy at being awash in fossils my earlier failure to dig was entirely forgotten. A pecten, for those of you who don't know, is a scallop; why geologists call them pectens and not scallops I cannot tell you. The pectens of the Pecten Gravels are thought to be nine million years old, but even in the context of such a tremendous passage of time it is difficult to understand how these shells come to be here. Like the seals and the Adelie penguin they are strictly marine creatures. Unlike the frozen carcasses I found, the scallops did not upend on their bivalves and walk here. Once, then, the Prospect Mesa was beside the sea-shore. Were its 150 meters of altitude once sandwiched down below such a massive glacier that the very earth's crust compressed enough to bring this spot down to the level of the ocean? Or were the seas so much higher? It is, the geologists told me, geologically confusing. But the pectens don't lie. The sea was here, one way or another. They were amazing to see, classically scallop-shaped, templates for the emblem of the pilgrim, many of the shells perfectly intact and not, as you or I might put it, fossilized. They looked and felt like shells.

All my best to you and all at McMurdo,
Rich