Some years ago, before Dr. Adam Lewis was a Dr., when he was "building six hundred thousand dollar goldfish ponds for yuppie jerks," he decided one day that he wanted to get a more fulfilling result from digging holes in the ground. He called a few of his old college geology professors, asking who might be worth approaching about a graduate program, and then headed to Maine. Clutching his transcript, he ambushed a professor named George Denton. Denton had his suitcase in one hand and was proverbially reaching to take his hat off the hook with the other. He was literally walking out the door of his office, departing for his next field season in Antarctica. Nonetheless, Lewis thrust his grade report at the other man who, in order to take it, must at least have had the good grace to put down one of the things he was carrying. Then Lewis stammered out his desire to study glaciology and how it fits in with what he likes to call "the big picture."

"Do you think there might a be place for me around here next semester?" asked Lewis. I imagine Denton, that eminence of glaciology, squinting down his nose and over the tops of his reading glasses at Lewis, and then through them at the transcript.

"We might be able to work something out," said Denton, unless he said something else equally noncommittal. "Nice to meet 'cha; gotta go, I'm off to Antarctica."

"So on the strength of that," Lewis told us on camera, "my wife and I packed up the car, left Idaho, and moved to Maine." Denton, he says, was horrified to hear later that his perfunctory and lukewarm approval had been enough to alter Lewis' destiny. Nevertheless it all worked out in the end, and now Lewis digs trenches in Antarctica in which no goldfish will ever swim. It is his seventh season.

Recently we filmed in a hole he dug. We have come to think of it as the ultimate trench of the 2006 field season, a work of art of glacial stratigraphy. A narrow slot that begins at a slab of exposed, striated bedrock, it slices some fifty feet into the hillside, exposing a roadmap of upteen years of sedimentary history. You would look and you would see compacted dirt and sand and pebbles; Lewis sees a story that unfolds over millions of years of history, and he begins to read it, out loud. 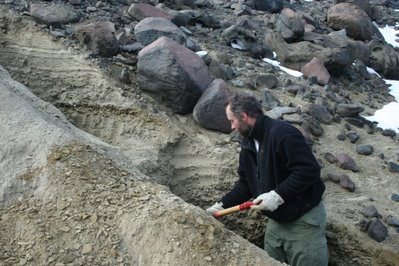 First, at the bottom, gouges in the bedrock indicate the passage of glaciers, first wiping the rock clean and then scoring it with boulders caught up at the edge of a ponderous but inexorably advancing mountain of ice. As you can see for yourself, various glaciers passed over this rock; the deep scratches show various axes of different glacial flows. Call this the prologue. 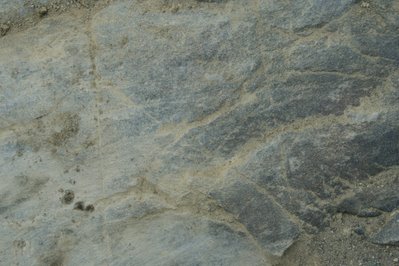 Next to it, at the bottom of the trench, is the beginning of this book, the oldest till, a layer of churned soil, rounded, scarred and semi-polished rocks and other rubble abandoned by the passing glacier. Above this is a hiatus, a narrow layer of ochre soil that represents a gap in the chronology, a missing chapter. Rusty-orange, oxidized, this layer sat, and weathered, and blew away, and absorbed rain, and dried, and was perhaps replenished from time to time by wind-born dust. It is impossible to say how long this hiatus lasted; thousands of years? Or millions?

Now the excitement starts, for it seems to have gotten awfully warm in the interim, before the next glaciation. Standing where we are in the trench, with fine tan sand underfoot, our feet would once, very long ago, have gotten wet. We might have dabbled our toes in the lapping edges of a lake. "Awfully warm," of course, is a relative and highly technical term; at this latitude, and with only a few months of sun in the year, those toes would have gotten very chilly, but here there was indisputably open water. Lewis reads the lake action in the wall of the trench. Each year or season narrow bands of sediment accumulated at the bottom of the lake, later to be buried again by the next year's layer. 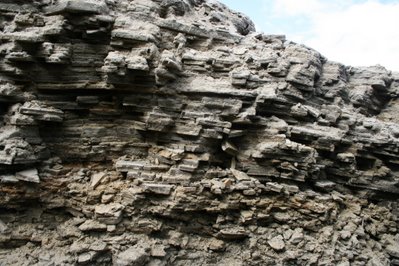 As we walk up the slope of the trench we move through time, striding through the millenia towards the present day. A vertical foot encompasses countless years of lake deposits; there was water here for a very long time. The dried, cracked layers of mud jutting out from the wall of the trench are uniform and narrow, like old-growth tree rings. It is more than likely that at some point life, frozen out by the earlier passage of the glacier, returned to the water and the surrounding shores. Plants similar to those which still grow in Patagonia today might once have flourished here. Leaves, twigs and the fossils of microscopic organisms undoubtedly lie trapped in these layers, waiting for discovery. Imagine the calm shores of an Adirondack lake, a golden birch leaf settling gently into the sand at the edge of the burbling shore; picture this going on year after year, layer after layer. That is what we are looking at here, but it all took place in some unimaginably distant past. 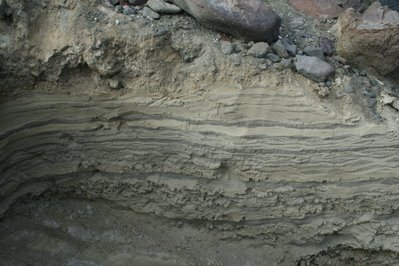 Climbing the trench, Lewis starts to see the influence of another, much later glacier. The lake, he thinks, was at some point trapped between the advancing ice and the bedrock. The layers grow less even and uniform. They are wavy, thick, and then thin. In some places some force has pushed an upper layer down, to slice through the older ones, intermingling the layers. This looks rather like one of those bottles of layered technicolored sand available as a diversion at the state fair. The glacier is approaching; fast, turbulent deposits sluice off the meltwater at its front edge, like a torrent whirling down a Brooklyn sewer in a thunderstorm. Each narrow layer a few feet further back down the trench might represent a year, so that a centimeter, or an inch or so might contain a decade or two of deposits, whereas the thick and wavy layers above were dropped much more quickly; a foot of these spectacular layers of interbedded sand might only represent a few storms one summer, or a handful of especially warm and melty days. 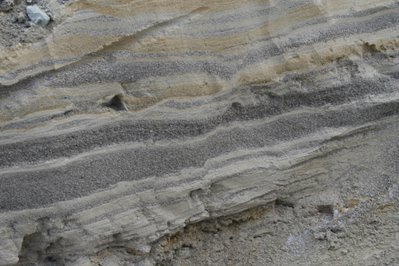 As the glacier approaches the layers thicken even more, until suddenly there are no more sandy, silty deposits. Here, at the top of the trench, the glacier has overridden the lake, pushing it away, obliterating it, and burying those final turbulent waves of sediment beneath another glacial till of chopped and rounded rocks. Here, for now is the end of the story, but between us, standing on solid ground at the top of the trench, and the till beneath our feet, lies another, invisible hiatus. Since that last glacier passed, we can speculate, everything froze down, no more layers have been deposited, and this barren hilltop has remained ever since the windblown plain of rocks on which we are camped.

All my best,
Rich