Dispatch from the Friis Hills 01 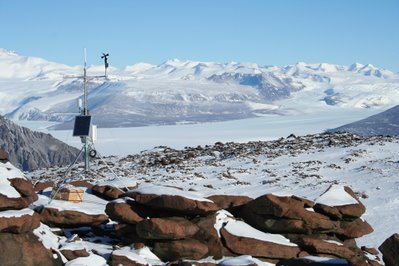 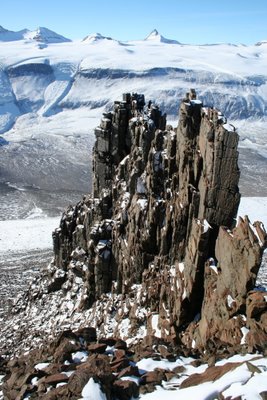 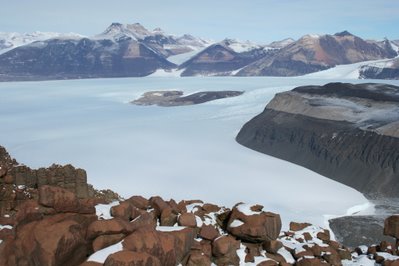 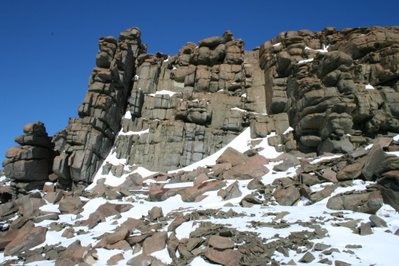 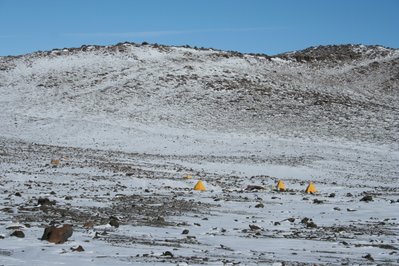 I hope you are well and everything is lovely back across the sound in MacTown. Just wanted to let you know that my old place over by Mt. Boreas is for rent, on the off chance you know somebody who is looking. It lacks some amenities (no toilet, no running water, no heat, no structure to speak of) but to accentuate the positive it is airy, not to say breezy, and it has great views. And the rent's not bad. Anyway, pass the word around; if anybody's interested they can reach me on walkie channel 13 on the Taylor Valley repeater.

We up and moved to the Friis Hills a couple of days ago--four helicopter loads worth of geologists, filmmakers and gear, over two tons of it. It was an endless day of interminable toil, the kind that brings to mind the construction of the great pyramids. One of the things that made it so long was that it began the day before when we prepped as much gear as possible and schlepped it to our makeshift helo-pad. On moving day itself we got up at 5AM in order to have enough time to get everything packed and wrapped before the helicopter arrived. First we took the tents down, which involved removing a ton or so of rocks from each of the tent aprons and extracting weighty pile of steel tent stakes from two weeks of very intimate connection with the permafrost. We then humped generators, fuel cans, rock boxes full of geology samples (rocks, dude, boxes full of rocks...), rock boxes full of as-yet-uneaten food, camera gear, tents, tool kits, urine barrels full of very heavy frozen urine, stoves, rock boxes full of tent stakes and so on up the hundred meter uphill trek to the landing zone. Serious John Henry chain-gain sort of stuff.

Imagine arriving at the very last moment when the family station wagon is just setting out to take junior off to freshman year at college. You want a ride. No problem, but you have to squeeze in under the tailgate. This should give you a fair idea of what the helo-ride was like; four of us sitting on a bench the size of a racing canoe seat facing, inches away, a solid wall of our own luggage. When I wasn't gnawing on my knees the brief glimpses I managed to steal out of the window, of the landscape passing beneath us, suggested that it was quite probably spectacular.

Dumped unceremoniously one hundred meters or so downhill (of course) from the site of our next camp, we began the schlepping process anew. Sweating and weary, just as we had finally finished moving the mountain of stuff that had refashioned the the helo into a sardine can, the next helicopter arrived with a fresh pile. On it went. Two more followed. The day went on and on until I had hammered the last tent stake back into the frozen ground and I collapsed into my sleeping bag.

On first view our new digs are less spectacular than our spot at Mt. Boreas. Exciting news for any prospective tenants! But to enjoy the splendors of the Friis Hills requires nothing more than fifteen or twenty minutes walk to the edge of the flat-topped mountain we are camped on. We are set up in a broad bowl at the center of a boulder field, ringed by low hills, atop an Antarctica butte or mesa. It is a sort of island entirely surrounded by a wide moat of glacial ice. The boulders are weathered into every sort of anthropomorphic shape imaginable, as if Noguchi, Brancusi and Botero had collaborated on a vast sculpture garden of monstrous granite blobs. I'll try to send a series of pictures of the best ones.

All around us steep dolorite cliffs, cracked and stacked like the Incan walls of Cuzco, plummet down to the vast ocean of glacial ice below us. Unless one is prepared to traverse the glaciers and risk their mighty crevasses there is literally no way out of here except by air. It is as if the seven of us are all alone in the world. At least so I thought until I went for a long hike, slogging my way up the tallest of the hills to the north-east of our camp. It was one of those wonderful walks where each hard-fought hundred meters of climbing earned yet more spectacular views. Finally, after finding one ridge after another ridge after another, I arrived at what I considered to be the top of the world. I scrambled up a boulder, only to see, just even with me on an adjacent rocky outcropping, an anemometer, complete with solar panel and two rock boxes filled with batteries, all mounted on a massive stainless steel tripod which some poor miserable beast had evidently carried up the same hill it took me two hours to ascend with nothing more weighty than a backpack full of big red parka and a couple of granola bars. There seemed to be no remotely suitable helicopter landing place within view, although I supposed one might have dropped the equipment from a sling. This rather crushed my sense of discovery and solitude but it put me in mind of the riggers, who have the coolest job in McMurdo, as long as you don't think too hard about the dangers of being forty feet up on an antenna tower on the top of Mt. Erebus when a sudden hurricane descends. If you see Andrew and Mikey from the rigger shack around town tell them I said hello and ask them when they are going to come out here and install our wireless internet service. If I'm not mistaken Mikey might even be the poor miserable beast just mentioned.

At this point I have pretty much finished devouring Douglas Mawson, as it were, but before putting "The Home of the Blizzard" down I discovered this fitting tribute to the riggers, which I was reminded of when I found to my shock and dismay that I was not the first soul ever to reach the top of the Friis Hills. "The erection of the wireless masts," wrote Mawson, "continued for some months during every favorable occasion. The first thing to do was to establish good anchorage. Then the oregon masts, section by section, were erected and securely stayed by stout steel-wire cables. This was a much more difficult piece of work than anyone in a genial climate is likely to imagine. Fumbling with bulky mitts, handling hammers and spanners, and manipulating knots and bolts with bare hands, while suspended in a boatswain's chair in the wind, the man up the mast had a difficult and miserable task."

We've just about finished charging up the camera batteries and will be turning off the generator soon, so that's all for now.