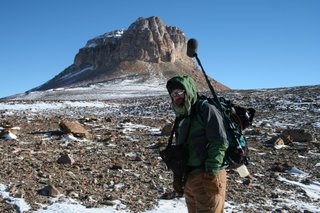 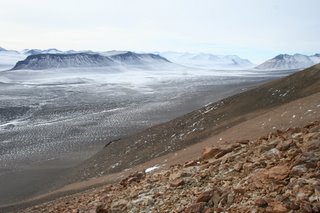 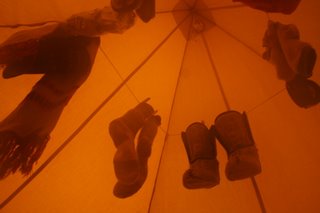 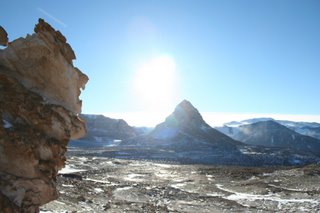 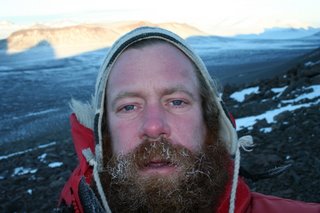 "Our hearth and home was the living-hut and its focus was the stove. Kitchen and stove were indissolubly linked, and beyond their pale was a wilderness of hanging clothes, boots, finnesko, mitts and what-not..."
--Douglas Mawson HOME OF THE BLIZZARD

You know the old cliche, "be careful what you wish for." After spending the last two months in McMurdo ridiculing the idea that any romantic vision of Antarctic adventure lives on, given the contrasts between the comfortable modern lifestyle of MacTown and the inhuman sufferings experienced by the great Antarctic explorers of old, I now feel fully planted in my own survival adventure. And we have only been here for six days. The great trial, as I knew it would be, is how difficult it is almost never to be fully and truly warm. I say almost because after an hour or so of hiking uphill with the sound gear strapped to my back the other day my internal engine was burning properly and I was warm from fingertip to toenail. But this is not a level of activity that one can sustain for long. Inside the sleeping bag at night, after burning two Coleman burners in the center of my Scott tent for half and hour or so, one also feels almost humanly warm, but within seconds of extinguishing the burners to avoid asphyxiation when actually going to sleep, fingers of frigid air reach out to grasp one around the face and throat. I have never been a junkie, but I imagine my relationship to my Coleman stove already to approach the level of intimacy, panic, desire and concern of the addict's with his works.

We spend an extraordinary amount of time filling fuel bottles, melting snow, drinking tea, hanging socks above stoves, preparing to prepare to cook tomorrow's evening meal, and sitting around imagining being warm, until the day has utterly passed us by. It is difficult to imagine how much useful filming we will accomplish under such circumstances, although we have managed to capture a scene or two each day. Yesterday, for instance, we filmed the geologists digging a hole with a jackhammer. So far, to my astonishment, the sound gear has fired up each time without giving any problems, but the batteries are difficult to charge; a couple seem to have given up the ghost completely.

So far it has been almost windless, but the other night there were a few shifting gusts and Adam Lewis, one of the geologists we are camped with, opined that this augured the imminent arrival of the katabatic winds, which here at the foot of Mt. Boreas deliver fearsome doses of frozen air from the polar plateau. At speeds of very many knots. "Make sure when you go to bed you tie your boots and your Big Red parka to your cot," he said. The Scott tents have no floor, just a separate heavy tarpaulin unattached to the walls of the tent. "That way if the winds get really bad and your tent blows away, at least you still have your boots and coat." The image this conjured of myself, lying in a cot in the open air watching all of my worldly possessions blow away in a hurricane, was fearsome, but my tent is attached to a variety of eighteen inch steel tent stakes driven into the permafrost, has many guylines tied to boulders, and stands tall with several hundred pounds of rocks weighing down its external apron, so I thought his suggestion that it might blow away rather histrionic. However, upon turning in I experienced a sheepish moment when, having discounted the need to do so, I nonetheless found myself lashing the boot laces through an opening in the cot. I was reminded of the scene in Apocalypse Now when a fingee soldier climbs aboard a helicopter and asks the veterans why on earth they are all uncomfortably seated on the crowns of their helmets. "So we don't get our balls shot off," one of them says. At which point the fingee laughs at the silliness of it all. Moments later, the laughter having given out, he nervously removes his own helmet and slides it between his legs. However, no wind materialized that night, and my boots and teabags were safe.

Lying there I remembered also the horrifying episode in which Bowers, Wilson and Cherry-Garrard watched, from on their backs in their sleeping bags, as the tarpaulin roof of their shelter shredded to threads before their eyes, only hours after their own tent had been swept away in a blizzard. I apologize for not finishing off that saga before leaving McMurdo. I was rather miffed that I had not a single email from New York begging for the next installment, and rather let that thread slide. But to make a long story short, when that storm of one hundred odd years ago had subsided, Bowers, by some miracle, discovered their silk tent some quarter of a mile downwind, barely damaged. Without it we can be quite certain that the trio would have perished not far from the Emperor Penguin colony at Cape Crozier. As it was they barely limped back to Cape Evans, frostbitten and on the point of death.

Instead of contrasting the wireless internet, saunas, and abundant hot food of today's McMurdo with the bubbling seal blubber and frozen hard tack biscuits of the golden age of exploration, I finally compare my obsessions and experiences here at the edge of extremity, if not to the near-insane hardships of the Winter Journey, at least to the daily life and concerns of those men who first arrived here at the turn of the last century. Only forty-six days to go.

Your writing is worthy of Eric Newby - may he rest in peace.
Keep it coming and don't let silence from New York deter you. We lap it up here in New Jersey.