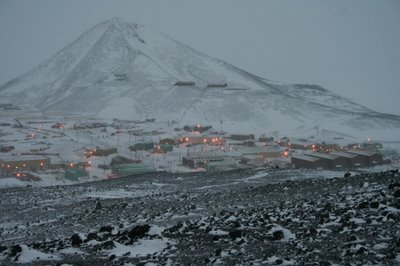 MacTown at dusk from the Hut Point Ridge trail


After struggling to get up at 5:45 and slathering on the layers until I felt like a walking ball of yarn, we met up at the office for the 7:15 departure to black island. After dragging my "sleep kit," two bags of ECW gear, sound package, and a pelican case full of backup sound gear out onto the loading dock I felt like a butterball turkey beginning to self-baste. Once everything was ready we all waddled over to the chow hall to meet the work crew that we hope to film fixing antennae and diesel generators at the Black Island facility. Most of them were there, but nobody had received final word that the trip was on. I wolfed down what must have been a two thousand calorie breakfast to fuel the engine for the long trip across the ice and about 7:18 the leader of the work gang ambled in shaking his head and said maybe tomorrow. We are debating whether to take ourselves off of the manifest.

The day before yesterday was our first official day off, a Sunday, and therefore everybody else's day off as well. I decided early that I would hike the Hut Point Ridge trail, one of the three recreational hikes currently open. Doing this requires filing an "efoot plan" online. It also requires a buddy. Faced with the immense social hurdle of corralling someone into going for a walk with me, followed by the administrative mountain of filling out a one page internet-based document, I quailed, and opted instead to bundle up and walk the road down to Hut Point, back to the "Discovery" hut. This is considered to be within the town limits, and therefore requires no notification or "buddy system." I walked up the hill at the end of the point and took the pictures of Vince's cross I posted last night, and then headed back to town, where I wandered about aimlessly and took a few pictures of the more exotic motorized conveyances to be found here, for the upcoming series Vehicles of McMurdo. As I was lingering by the Heavy Shop, taking pictures of a geriatric John Deere tractor, my man Deany appeared with a fivesome of happy campers, just setting out to walk the Hut Ridge Trail. 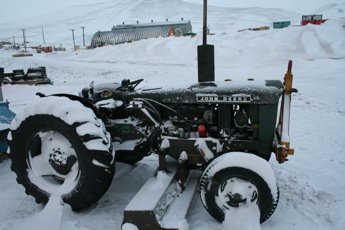 from: Vehicles of McMurdo

Deany is a capital fellow, what we might call in today's parlance an excellent dude, who we first met when he plonked himself down at our dining table and urged us to tell him a story. We stammered, as one does when unexpectedly prompted to entertain, whereupon he told us with great enthusiasm of the wonderful travels he had had following his last tour of duty on the ice. He had worked as a volunteer "woofer," working four hours a day on organic farms across New Zealand in return for room and board and then shipped out on a yacht delivery to Tonga. He noted that two years' experience working in a warehouse, rather than "my fifteen years of living off the grid in a tent" were what had qualified him for a job in Antarctica. I believe he works in supply, but I don't know, which is interesting in and of itself because many conversations here don't go much beyond the inevitable opener: "and where do you work?." He told us all this with an innocent enthusiasm and seemed to me to take an infectious delight in what the world has on offer; I liked him immediately. 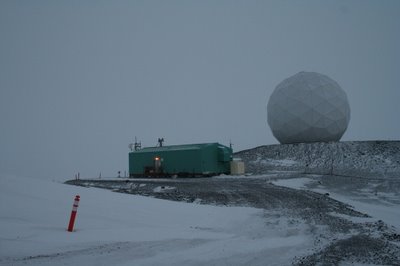 At the top of the trail is the "ping-pong ball." It might not look like it, but this is used in the pursuit of science and has no military application today, nor will it have in the future.

The group had only moments earlier added Jane to their efoot plan, by calling the firehouse to add her details, but they urged me to join them as well. The fireman I spoke to was rather chagrined, particularly as I didn't know my own telephone number or room number (note to efoot plan web designer: ninety percent of the information required for the efoot plan should autofill once a valid community member name is added. Anything which autofills incorrectly would then be overwriteable by the user.), but eventually he wished me happy hiking, and, administratively qualified to hike the loop, I set out with Deany's band.

I knew, but hadn't quite internalized until this hike, that our little home, Ross Island, is essentially the product of Erebus. As we hiked up towards Arrival Heights, despite the blowing snow and the subzero windchill, I was reminded of hiking volcanoes in Guatemala. The entire landscape, in fact, is cinder and chunks of volcanic rock, much of it snowswept and buried in ice. It is a short but stunning hike that descends the ridge above the "Discovery" hut, following the curve of the coastline, with the endless frozen sheet of the McMurdo sound just off the edge of the trail. I have scoffed at the rules and regulations requiring check-out in order to take a two hour stroll, but once we reached the ridgetop I understood the necessity for having a radio and a buddy. Chilly, yet perfectly comfortable on the hike up the road, we piled on double thermopane goggles, balaclavas and snorkle hoods once we reached the ridge. The narrow trail had patches of fresh and treacherous snow, and a turned ankle up there, even though in plain view of McMurdo station, could have dire consequences for the solo walker. Instead of twisting our ankles, however, we went skating. 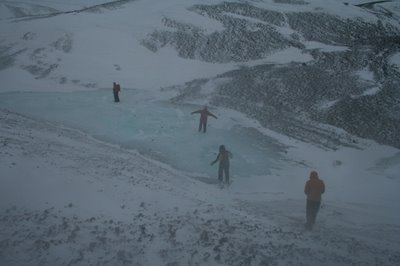 The "exotic motorized conveyance" you so humbly captured here above is none other than the "Magnatron". This classic beauty was used to recover the many nails, screws and various annoyances spewn about on the well- trod roads of Mactown. I first had the pleasure of saddling this steed winter '95, clad in balaclava and snuggly-tied-down cowboy hat in a condition 2 blow. Good times, good times! Enjoy the journey- it stays with you.