The brilliance of the Finns 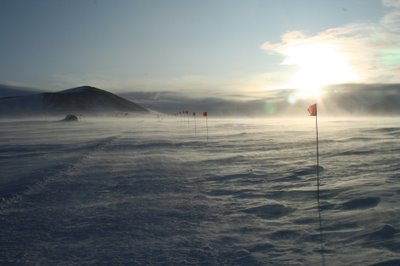 We took today off after filming ten interviews yesterday in our "interrogation room." At this point, on a free day, I am all for seizing every opportunity to get out of McMurdo. Anne agreed, and joined me on a hike to Castle Rock, one of the few trails currently open for recreational walking, two people minimum. Upon checking out with the firehouse they informed us that the weather was looking ominous and recommended that rather than do the entire seven-mile loop we ought rather to turn back at the rock and make it a shorter round trip. It was clear and bright and cold and windy and when we reached the top of the road that climbs up behind the "Heavy Shop" something that looked rather like a potential storm was sitting out on the horizon, and we suddenly had at least thirty knots of wind right in our faces. It was pretty slow going, uphill and into the headwind, and there were moments when we were setting our goals pretty low, as in trying to get up the enthusiasm to reach the next bamboo flag, twenty yards further. Finally we reached the first survival hut, called the Apple, or the Tomato, and tucked inside to break out our thermos and have a cup of tea. The Apple has two cots with frost encrusted sleeping bags, a cook stove, a medical kit, emergency food, and a fold out table for pouring the tea. 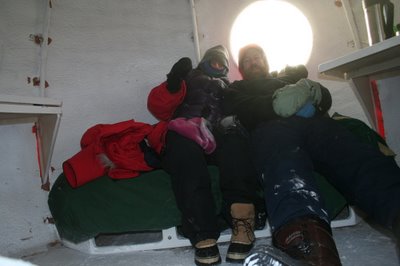 Our friend Mike the rigger and his girlfriend were once caught in a vicious storm and had to spend the night in the predecessor to the Apple; even though it is only a couple of miles back to McMurdo if the weather gets nasty and visibility goes to nothing it sometimes does happen that it is better to just sit tight out there.

We returned via the Hut Ridge Loop trail, which I hiked last weekend with Deany. It was completely different today than last time, when it was overcast and blowing snow. Today the wind threatened to push us off the ridge and down onto the frozen sea far below, but we were in bright sunshine and it was a spectacular walk down to the "Discovery" hut. 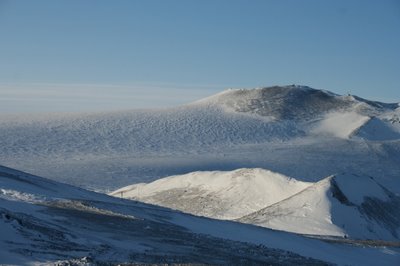 Back in time for a hot lunch I took further advantage of the posh comforts that you dwellers of the milder latitudes can't possibly imagine we have down here. I went to building 209 and had a sauna

. Hello!!? Why is it that nobody mentioned the saunas in any of the 300 briefings we attended? Rectifying this oversight should be made a major priority. You can get scalded in one of those. Please, briefly brief us on the appropriate brevity. If Deany hadn't told me about the saunas I think I would have spent most of my time here assuming that they were something only to be had at the South Pole. Thankfully, despite the omission, I emerged unscathed. I'm actually very good at saunas. Lie on warm teak planks butt naked. Sweat like a beast. Lather, Rinse, Repeat. Let's face it, the Finns are a bunch of geniuses.

the APs could use one of those saunas but instead are comfortably ensconced with cousin Mary in Moffat.

Where are the visual aids to the story of you experiencing the brilliance of the Finns eh? ;) I mean...everything else gets documented in a picture...?
~W