Just another day on the sea ice

Asked to discuss his sublime photographs

of sea and sky, perfectly bisected by the horizon line, Hiroshi Sugimoto stated that one of his guiding concepts in creating his seascapes was a desire to photograph vistas that were in essence timeless. I'm not sure whether he ever came to Antarctic waters to take pictures of the sea while working on that project, but yesterday, as we travelled out onto the ice again for our official sea ice training, one needed do nothing more than walk a few steps forward past the inevitable line of bamboo flags in order to be plunged into one spectacular and chronologically infinite landscape after another.

We drilled holes to test the thickness of the ice, and filmed others drilling holes. We passed Inaccessible Island, too steep for the great explorers to have landed on; nobody else seems to have made so much as a mark since. 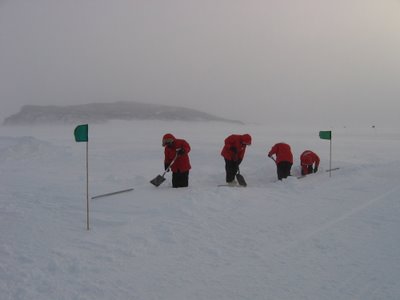 At the foot of the Barne Glacier a collection of enormous brown tubular sausages lounging on the ice constituted our first sighting of Weddell's Seal. Vast torpedoes of blubber, they rolled in the snow, occasionally lifting a languid flipper or a wedge-shaped tail. Years of birdwatching have taught me that committed efforts to watch wildlife always lead to the most spectacular natural settings on earth. Of all the places to choose, the seals were resting directly beneath the unearthly crystal-blue ice-cliffs of the Glacier. Science says they are there because the pressure cracks in the sea ice that radiate out from the glacier towards the outlying islands create access holes where it easy to pass from the water to the surface, but they seemed to me to have chosen the spot for its awesome surroundings.

Nonetheless the Barne Glacier has undoubtedly moved, travelled, broken, warped and calved far too much over the last eternity of millennia for the view to have been of any use to Sugimoto. Instead it was to the west, over an unbroken and untraveled sheet of sea-ice, that the vista, of only the narrowest slit of sunlit mountains, trapped between ice and low white sky, spoke of the infinite.