The bottom of a glass of milk

At 8:07 this morning I was still in bed in my minuscule half of a dorm room. Around here that constitutes sleeping in, but we had scheduled a bunch more sit down interviews for today and the first one wasn't to be until around ten. I woke when the phone started ringing, an occasion so rare that I didn't even know the room had a phone in it until a few days ago. "The weather has shifted, plans have changed we're going out on the sea ice, and we have to be ready in twenty-five minutes." Anne, on the phone. "That's going to be hard," I said. "Goodbye." I managed to go from boxer shorts in bed to seven full layers of ECW (that's extreme cold weather to you, you indian summerer) in the office in about twelve minutes, but I wasn't very happy about it. We grabbed more bags of ECW gear, sound gear, camera, tripod, E Z rig, thermoses of hot liquids, water bottles, snacks, bag lunches, ice drills and bamboo flags and loaded up Pisten Bullies 313 and 315. The whole time I was thinking: this is a rude awakening. 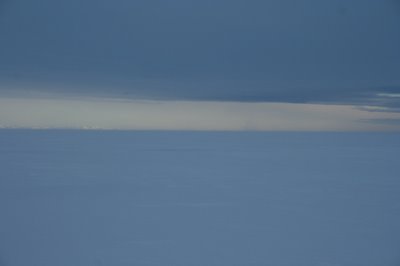 In memory of Clyfford Still


It turned out to be an inauspicious start to a glorious day. I don't want to badmouth McMurdo too much, but it was just wonderful to get out of town again. The three of us, along with Cece and Thai, who also took us camping at forty below, and Dr. Regina Eisert, our local seal scientist, headed out to examine the route over the ice to Regina's future camp, where she will take endless blood and milk samples from calving Weddell seals in what passes for the summer around here. 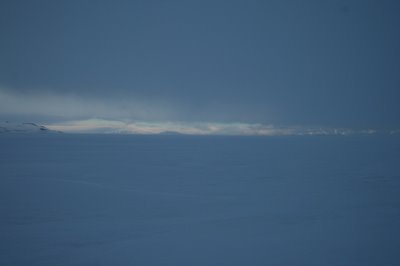 A storm was threatening and the sky was low and uniformly gray, but visibility was good and we could see a band of sunny mountains along the horizon line, a sliver trapped between blank white sea ice and cold gray sky. From time to time the wind came up and the view deteriorated. In the blowing snow there was no separation between sky, ground, air, or even windshield. Thai described this condition as "driving around the bottom of a glass of milk," or "being inside the ping pong ball." From time to time we stopped and drilled and flagged, leaving a trail of flapping banners on bamboo stakes to mark the route. 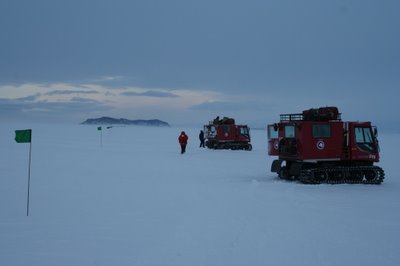 Following a pressure fault in the ice, we looked for a place to pass over the crack. By drilling a series of holes and measuring the depth of the ice Cece and Thai determined not only that we could not cross, but that a Pisten Bully would quite likely plunge through into the Ross Sea; in places there was less than a meter of ice, and at one point my foot went through a shell of snow down to my thigh before my foot came to rest on the thinner layer of ice covering the crack. Seal scat and blood on the snow indicated the presence of seals, and the presence of holes through into the water below, but with the water temperature a balmy negative one or two C Regina said she was sure that the beasts would stay under the ice, and indeed we didn't see any. 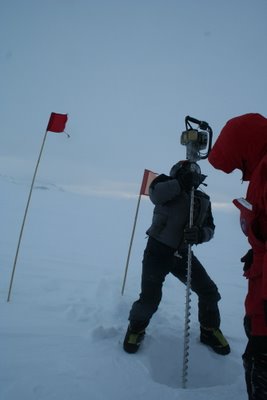 We drove on and soon found a bridge, where another long series of bored holes showed the ice to be at least two meters thick. After drilling a few holes I lay on my back on the ice and looked up into the massive ceiling of clouds and felt a kind of euphoria. Anne and Sylvestre were filming some distant landscapes from the wind-shelter of the Pisten Bully. Since Cece refused to let us turn the vehicles off in case they wouldn't start again I elected once again not to record the sound of the engines as the soundtrack for the spectacular mountain scenery and instead just lay on the ice feeling wonderful and watching snow blow past. I don't know why I was enjoying myself so much but something was going on and I was blissfully content. 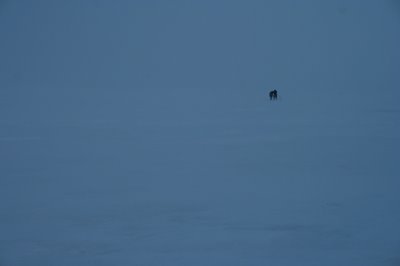 The black spots are Cece and Thai, drilling in the void


Tomorrow we are going out again for our official "sea-ice training" and I was so happy out there that I was tempted to ask them just to leave me out there until then. Once we have completed our sea-ice course we will be able to drive out onto the sea ice ourselves and take our chances turning off our own damn Pisten Bully. Of course then I'll actually have to work and not lie around like a seal. 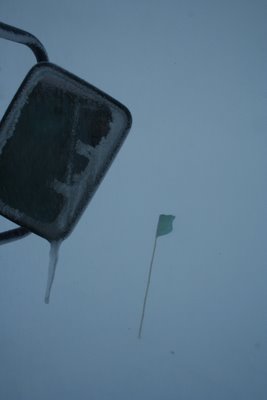 The rear view mirror inside the ping-pong ball, and a bamboo flag floating in a bowl of milk...