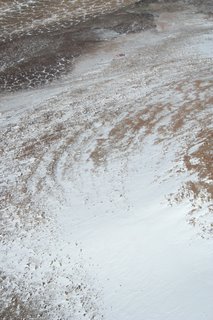 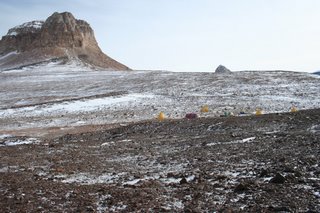 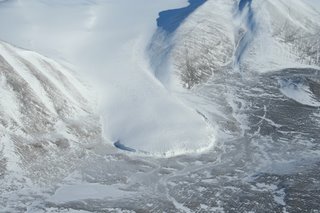 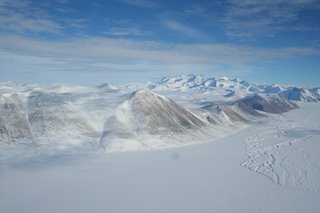 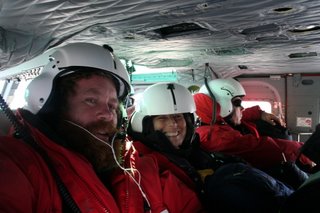 October 23rd:
Dear Deany,
The anticipation, the worry, the envisioning, the troubleshooting, and the preparation are all behind us as we have finally arrived at the foot of Mt. Boreas to begin our grotesquely long sojourn in the Antarctic wilderness. Fifty-two days. If stuff doesn't work, it's too late now, so why stress. It is spectacular here. Mt. Boreas looks something like a butte or a mesa and looms over us from the south-east. We are camped with four geologists on a narrow saddle between the steepest slopes of the mountain and a more gentle slide down to the valley floor to the north, a dry and frozen canyon that descends out onto the Ross Sea.

We took off from McMurdo around 3 pm. From the helicopter we could see open water towards the northern horizon, and I feel sure I can see just a patch of it, at the edge of the sea ice, from just up the hill from our camp here, at the "helo pad"-- a patch of rocks with the largest boulders removed. I haven't gotten out the binoculars to be sure. From the helicopter we had spectacular views of the Royal Society Mountains as we traced the western edge of McMurdo sound. Below us were many apparently enormous icebergs, like flat-topped merengues, entrapped in the ice. I imagine them to be mere sugarcubes compared to the bergs like B-15 that have kept McMurdo iced in for these last few years.

The geologists had flown out a few hours earlier than we, and when we arrived they had already set up their Endurance tent. The four of them, in big red parkas, were gathered and waving to us from the ground. Instead of the "hot-offload" we had been expecting, the pilot shut down the rotors and we piled our gear in a pile on a plain of shattered dark red basalt. Mt. Boreas is supposed to be a terribly windy place to camp, but it was calm and clear and cold, with beautiful blue skies. If it weren't for the patches of snow and tongues of glacial ice licking their way down between distant mountain clefts I would have sworn I was somewhere in the southwestern United States. We got our own Endurance tent up easily enough, fired up a Coleman stove and started melting snow to make tea while waiting for the helicopter to come back with more Scott tents, camera equipment and the bulk of our food, all packed into plywood rock boxes which the geologists will use for transporting samples after we have devoured all the grub in them. Which reminds me I haven't opened the rock box with all my beers in it yet, and I better go do that; I'm sure they are all frozen solid by now. I know this blogging thing is important, but camping is all about priorities. More Later.