The passing of our salad days

Yesterday the first flight of Mainbody arrived, "mainbody" being the local term for summer, synonymous with hustle and bustle, overcrowding, permanent sunshine, fresh vegetables and the actual carrying out of scientific experiments. Over the next week hundreds more summerers will arrive and our Winfly cronies and the folks we have filmed and celebrated and commiserated with will fly off to three and four and sometimes more month vacations in New Zealand, Thailand, the Cook Islands, Mexico, and so forth, disappearing from our radar screen in a sudden and disconcerting, but one hopes, impermanent way. We are experiencing a small taste of the jarring and discombobulating sensation that the winterovers must have felt when we arrived to wreak psychological havoc, after two hundred of them spent six months together in darkness, building an insular community. 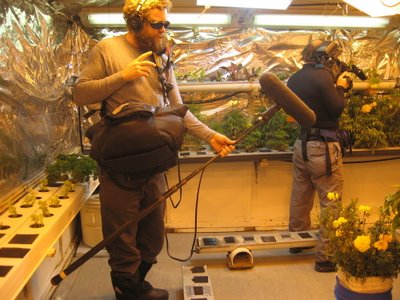 Please, don't bother me. Can't you noisy new arrivals see that I am recording the love song of the marigolds? Photo: Anne Aghion

As if to remind ourselves of the outside world prior to this onslaught, we visited the McMurdo greenhouse before the flight arrived. Here is a facility begging for a comprehensive corporate cost-benefit analysis, followed by expansion and investment. It is to the Raytheon Corporation's credit that there is still a greenhouse here, with paid staff who manage to hydroponically produce enough salad, cucumbers, and tomatoes to have one lovely dose of greens each week during winter, and the occasional salad during Winfly. But regardless of the dollar cost of producing the odd gherkin here it is within the less quantifiable psychological benefit of the operation that its true value lies. It is a funny place, with low ceilings and rockwool plugs of green floating in bisected lengths of donated PVC pipe. Tomato plants clog the narrow spaces, curling upwards as they climb lengths of cord towards thousands of watts of sodium vapor lights. Water gurgles and the glare of the lamps bounces off the mylar foil walls and ceilings. Amongst the juvenile lettuces two hammocks are strung up in which the public may relax and read and take an impromptu chlorophyl cure. I have never spent so long in my life without seeing a bird or an insect; I long to be bitten by a mosquito. To see blooming marigolds was a great delight. 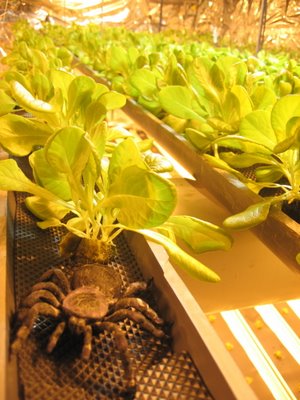 Is that a tarantula in the foreground??

that is a big old terrifying and devastatingly dangerous plastic tarantula