Dreaming of Ice: 120 Degrees in Kandahar in a Kevlar vest 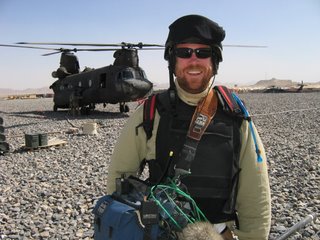 As I sit on the sofa in cutoff shorts, sweat collecting at the top of my belly while the ceiling fan beats the air in a hapless attempt to cool my un-airconditioned house, making the mental leap to the mid-winter blackness of Antarctica is a challenge. I've just returned from the Professional Sound Corporation on Forty-Third street with bundles of supplementary sound gear in case the stuff I aleady own freezes up and refuses to work. The sun is beating down on the deck out back and so I have unpacked the enormous pack boots, "Baffin Technology," rated to -100 degrees C, and set them on the patio table to warm up, as instructed on the packet of sno seal silicone boot treatment. This will rub into them more successfully once the leather has warmed. The boots are a joke, like one of those enormous size 15 sneakers placed on display in shoe stores. They have wool liners an inch thick with layers of reflective foil as if made from a space blanket. Last week when they arrived I tried them on on the front stoop. They were toasty. Then I calculated that they are designed for temperatures 200 degrees cooler than the test conditions of late July in Red Hook. I had the thought of taking them down to the newly opened Fairway supermarket at the end of Van Brunt and asking if I might hang out for a while in the meat locker but instead I crammed them into one of the enormous plastic suitcases we are using for all the gear going with us on the trip.

The sound equipment is just as absurd. I have a mixer and a recorder and wireless microphone receivers and a new rig to power the whole mess from batteries compatible with the cameras we will use, batteries said to lose little of their power at minus forty degrees. All this gear, meant to be worn around my neck as a sort of portable mixing studio while I record the conversations of Antarctic scientists digging for samples, melting snow and cooking dehydrated food, is velcroed solidly together and crammed into a carry bag. This in turn is surrounded by a puffy, insulated "polar bag", a muff that looks as if it had been cut out of a length of cold weather sleeping bag. The only access to the controls is through a felt-lined slot in the top just wide-mouthed enough for me to get my hand in. I imagine trying to work the equipment in mittens and determine that the best way to turn on the recorder will be by jamming a chopstick through the access hole for the shoulder strap. We leave in just under three weeks.
1 Please leave your comments or remarks!