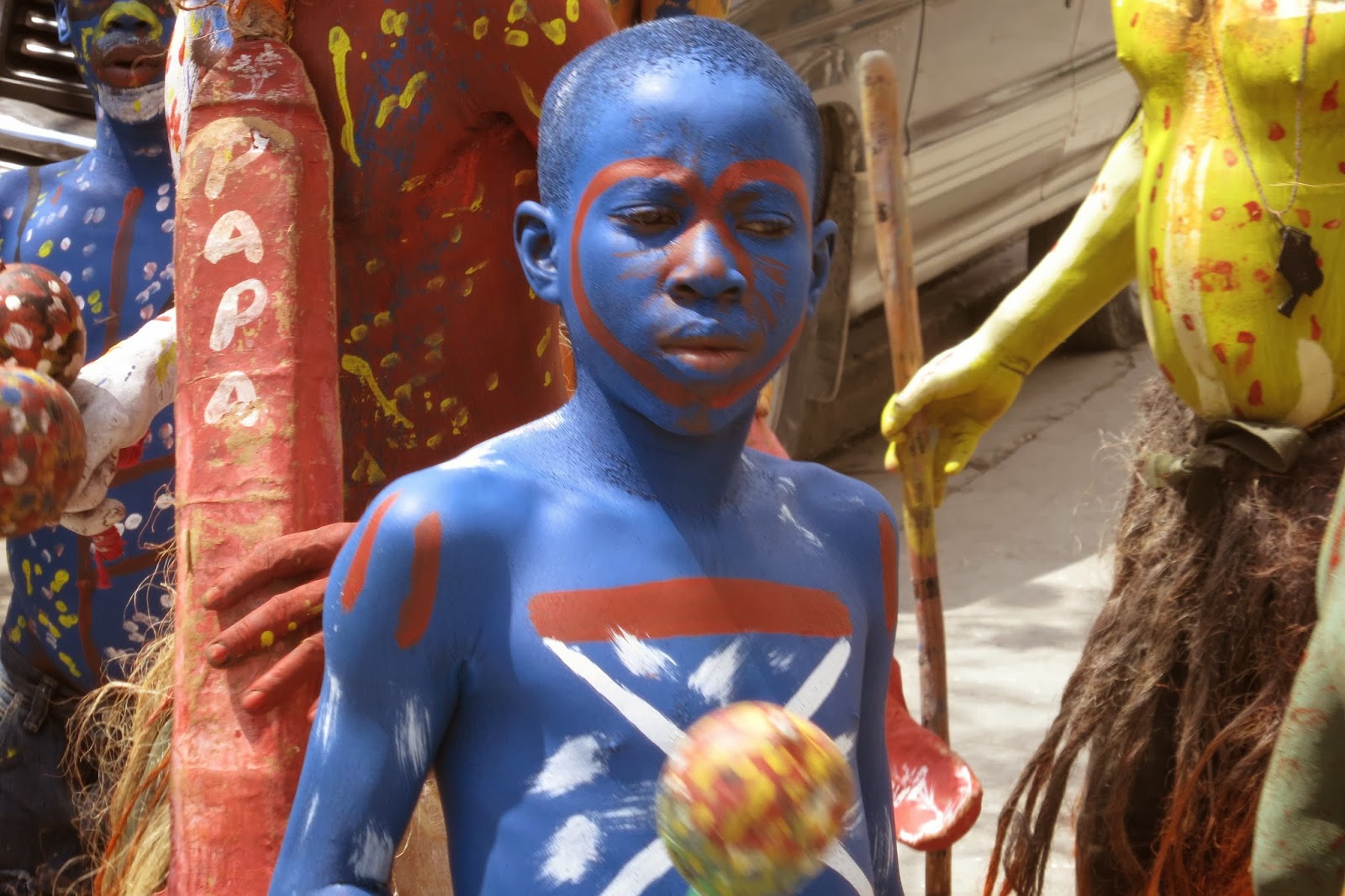 Even mardi-gras aficionados might not think of Jacmel when making a list of the world's greatest carnivals, but the Jacmelians, much as they would love to have had more visitors since mass tourism withered in Haiti some thirty-five years ago, ultimately don't seem to care. Through dictatorships long and short, political turmoil of every stripe, cyclones and hurricanes, this small city on the south coast has nourished and maintained its old and eccentric carnival traditions. Only the terrible earthquake of January 2010 put a one-year damper on the festivities. Today's urban planners and "creative placemakers," fond of overusing words like resiliency and vibrancy, would do well to visit Jacmel, where on most Sundays between the Day of Kings and mardi-gras itself the Avenue Barranquilla and its innumerable side streets may be filled with impromptu parades, guerilla theater and entirely freelance carnivalesque actions. New Orleans is definitely a good time on mardi-gras day, but its uniformed high-school marching bands and vast motorized floats populated by waving bacchanalians seem hopelessly corporate when put up against the roving pantomimes of Jacmel's masqueraders. I confess I have never been to Trinidad or Rio, but it is hard for me to believe that their mardi-gras wonders could surpass those of Jacmel. 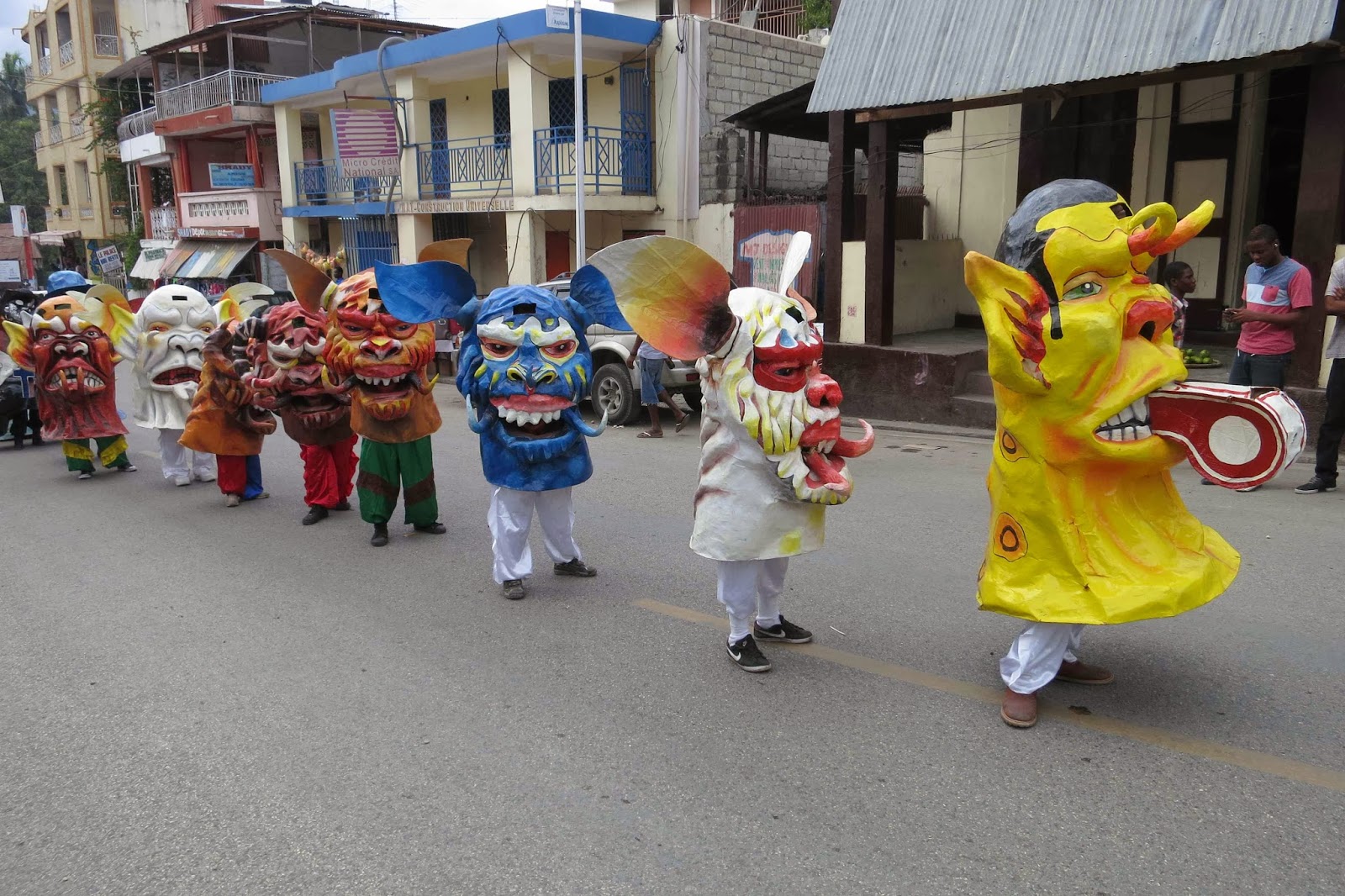 Haiti's carnivals have been by no means immune to corporate pressures. There is now an "official" national carnival, organized by the government, held this year in Gonaïves, and in recognition, perhaps of Jacmel's uniqueness, there is also a weekend dedicated to Jacmel's "historic" kanaval. This took place on the weekend of February 21st and 22nd, a few days before I arrived in Port au Prince, fed up at last with New York's endless winter. We wanted to film and record music in Jacmel, and because the previous weekend had been heavily promoted, people in the capital announced that Jacmel's carnival had already happened, that we had missed it and would find nothing on the weekend of March 1st and 2nd, when the whole country, they said, would be heading for the giant party in Gonaïves. Contacts in Jacmel, however, assured us that this was preposterous, that the revelries would be in full swing, and that we would find, if anything, a more authentic and relaxed expression, given that the town would not be overrun by partying outsiders. 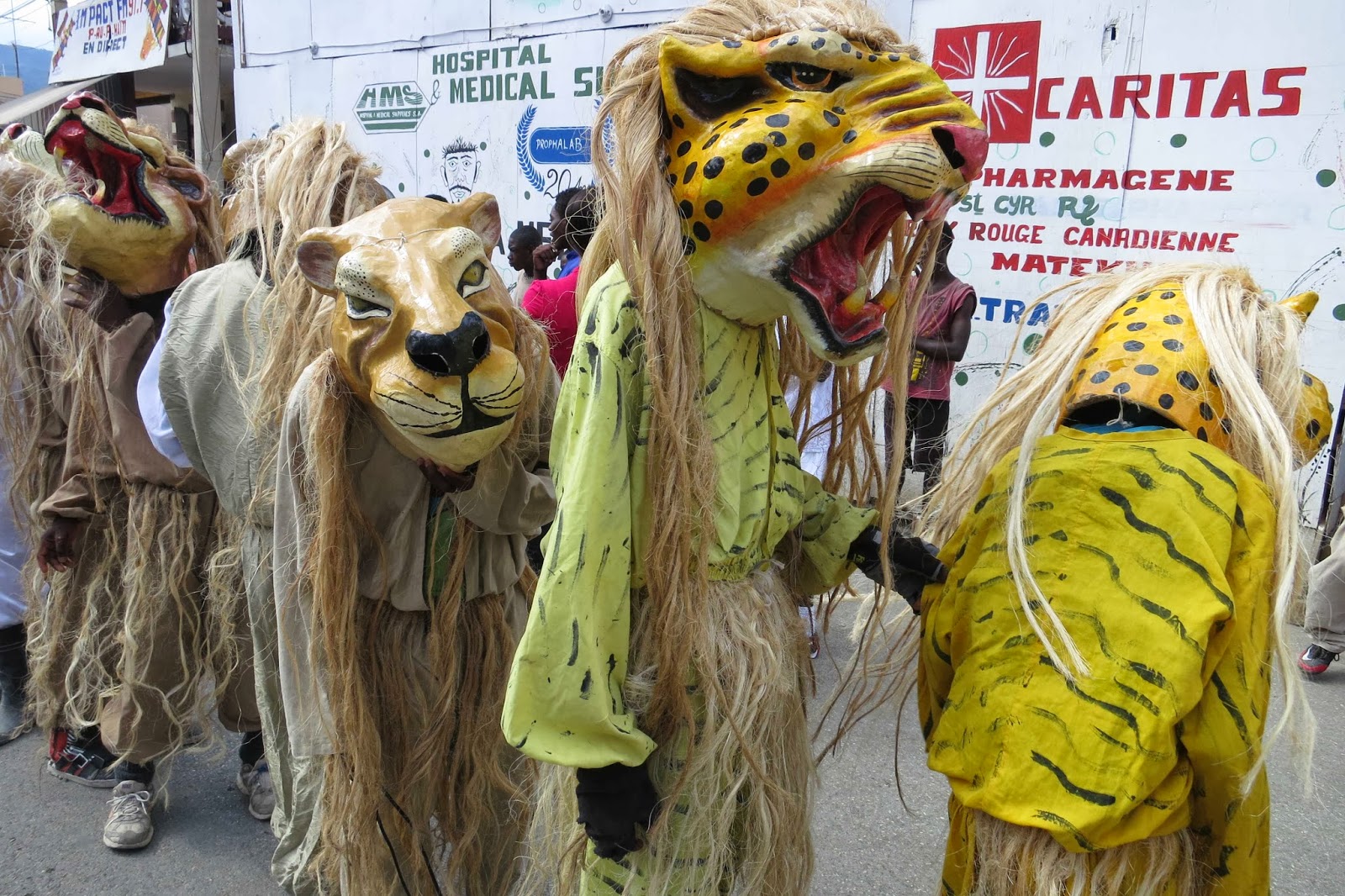 Early on Sunday morning, we headed out from Port-a-Prince for the two-and-a-half-hour drive to Jacmel. By 9:30 we were cruising slowly through near-deserted streets. While many of Jacmel's tropical Victorian coffee warehouses and gingerbread homes were damaged by the earthquake, the town is still architecturally splendid. There wasn't a carnival reveler to be found. “Perhaps after church lets out,” said my friend and former student Bayard, a graduate of the Ciné Institute of Jacmel who had agreed to help us film some kanaval action. As the unofficial producer of this particular weekend's filming, I felt a sense of responsibility, and therefore nervousness. I had been in close touch with Bayard all week, and he had urged us to leave the capital as early as we could, but now that we had arrived bright and early Jacmel was so calm that I wouldn't have been surprised to see a tumbleweed blowing down the street. I had to wonder if my intel was bad.

Then, as we were turning onto a steep cobblestoned street leading up to the town square in search of breakfast, we were accosted by a strange figure. He wore turquoise trousers and a blue blazer, festooned with colored ribbons and ersatz medals. On his head was a red felt hat and a mask made from flesh-colored screen decorated with a cotton-ball beard. In one burgundy-gloved hand he held a small scepter, or perhaps a short length of tin curtain rod, to which were tied bits of red, white and blue ribbon. "Je suis Mr. L'histoire D'Haiti," he said. "I am here to tell you about the Haitian history. Would you like to know it?" 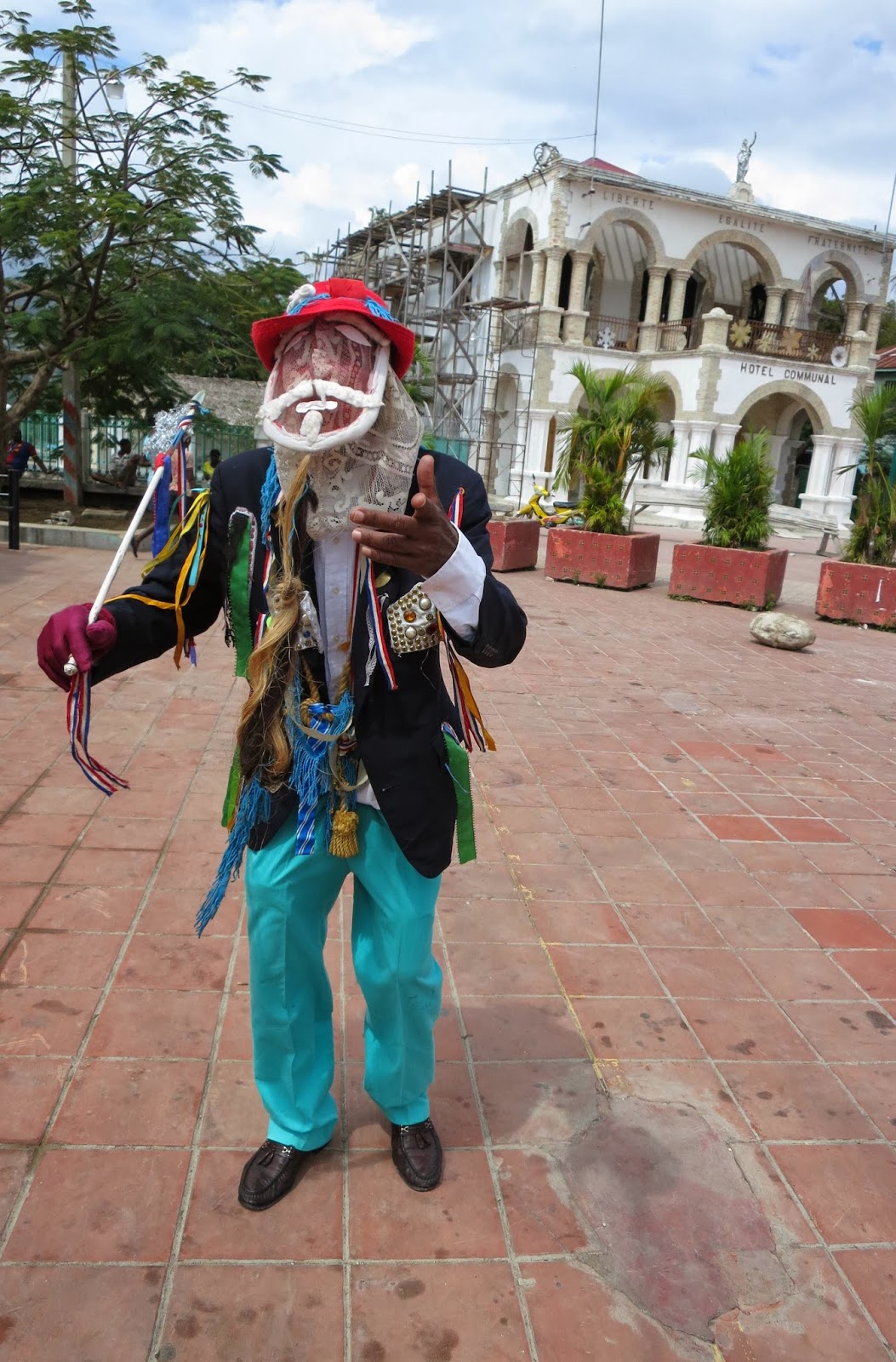 Why, yes, we said, excitedly. We unloaded our gear just in time for Mr. Haitian History to begin what turned out to be a grand recitation of some long-forgotten (by others) primer, complete with commas and full-stops. ("On August fourteenth comma seventeen ninety one comma the voodoo priest Boukman held a ceremony at the Bois Caïman comma launching the Haitian revolution period.) Soon, under the tropical sun, we were exhausted. Mr. History was not. He seemed prepared to recite the entire textbook, if we were interested.

I'm not sure if Mr. History of Haiti is a well-established member of the Jacmel carnival pantheon, or a recent creation, but this uncertainty is just one of the things that keeps the town-wide party interesting. Successful "traditions," once invented, are passed down the generations. Sometimes they lie dormant for years, or decades, only to be resurrected, often when their particular political message once again seems relevant, or pointed.

Perennial favorites are the gangs of "Charles Oscar," a sort of combination of multiple eras of evil political enforcer based on a single early 20th century Jacmel police officer of renowned brutality. These roving bands wear Napoleonic gear and huge sets of felt teeth to represent their corruption and insatiable greed.

Those interested in the history of anti-semitism will be shocked and awed to turn a streetcorner in Jacmel and come upon a pantomime of the Wandering Jew, in which a beak-nosed, silk-robed figure with a tall shepherd's crook takes turns trading blows with a hostile, jeering, laughing crowd.

The semiology of the "Lanceurs de Corde" should be obvious; these ominous chain gangs of whip-cracking youth, painted head-to-toe with a foul, black and sticky tar, menace spectators with their long ropes, their threat of a syrupy smear, and their allusion to slavery.

Our random, felicitous encounter with Mr. History of Haiti proved to be a good omen. As the day wore on, we were to meet with all these Jacmel archetypes and more. 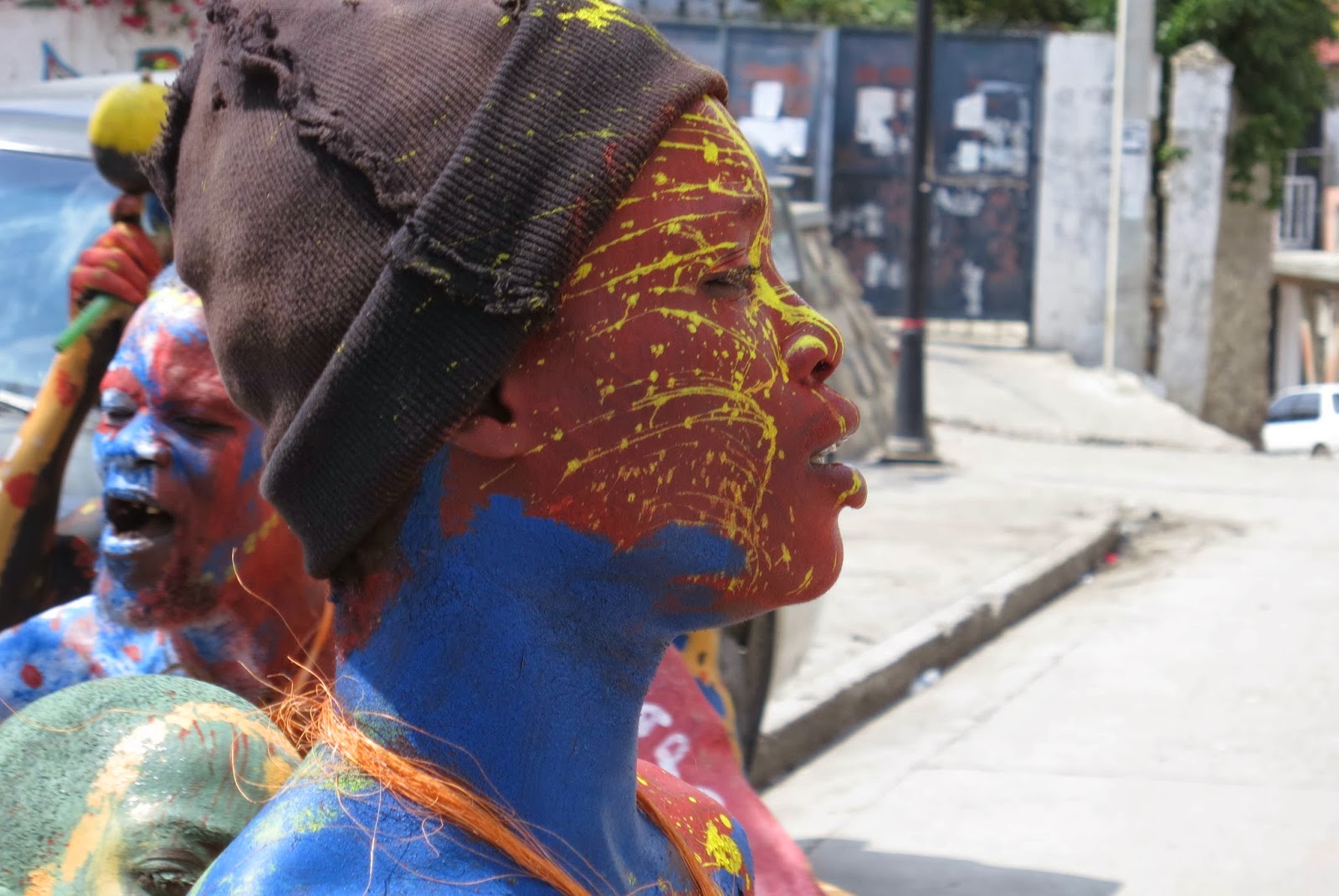 culled from more than fifteen visits to the Jacmel Kanaval. (Full disclosure, I wrote one of the accompanying essays.) 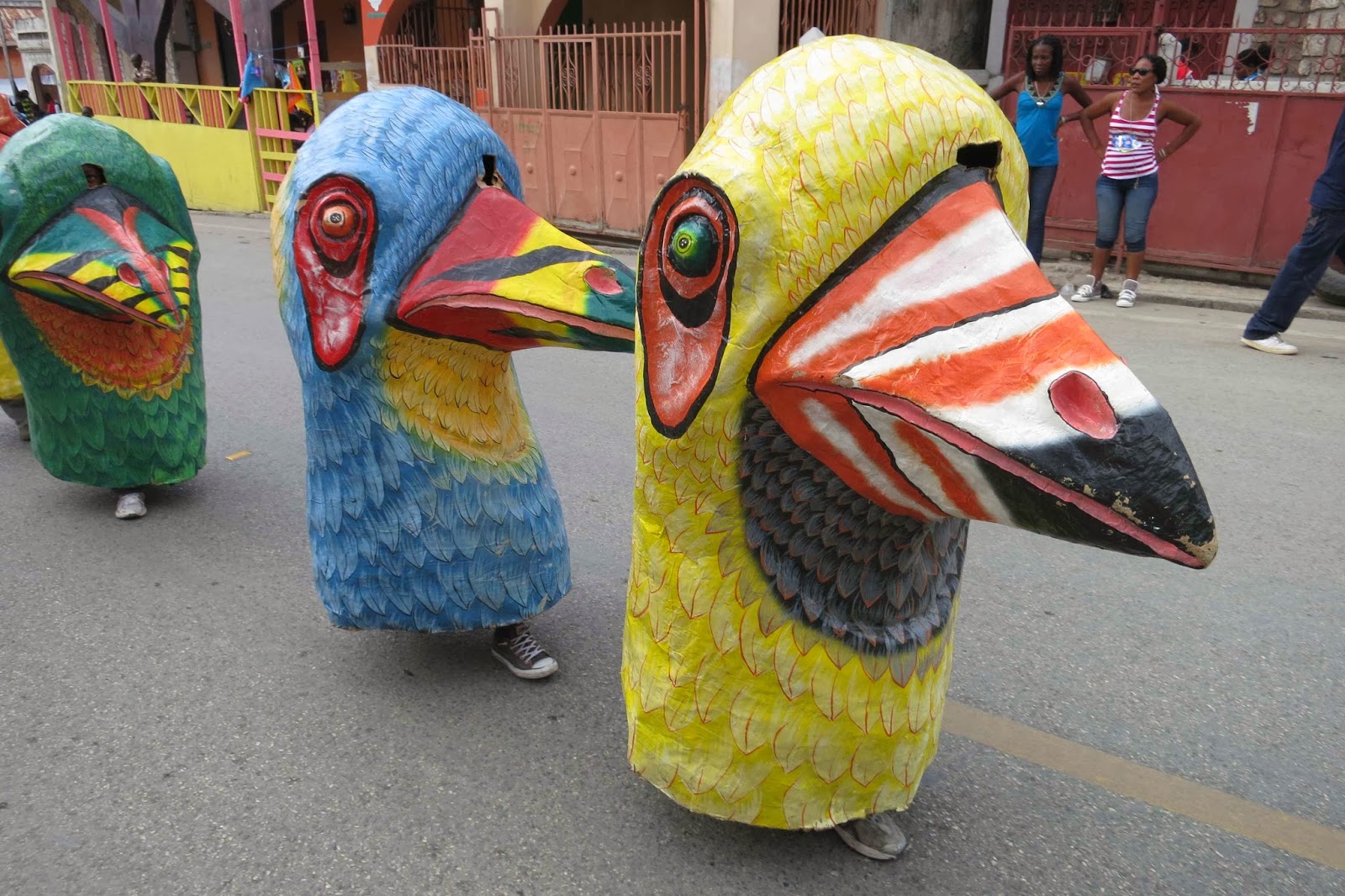 I believe Jacmel represents the apogee of papier-maché construction. 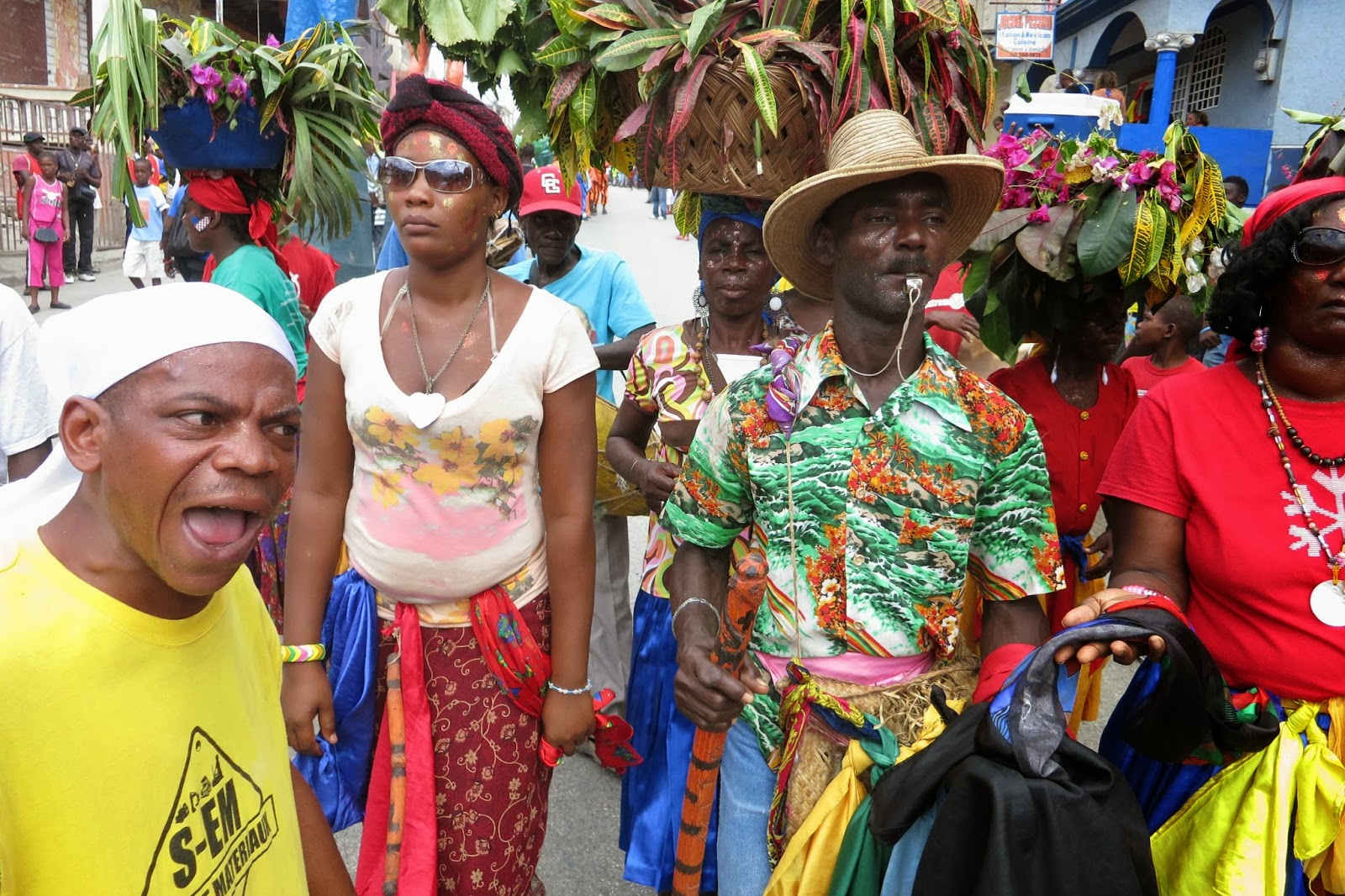 March of the zombie Carmen Mirandas? 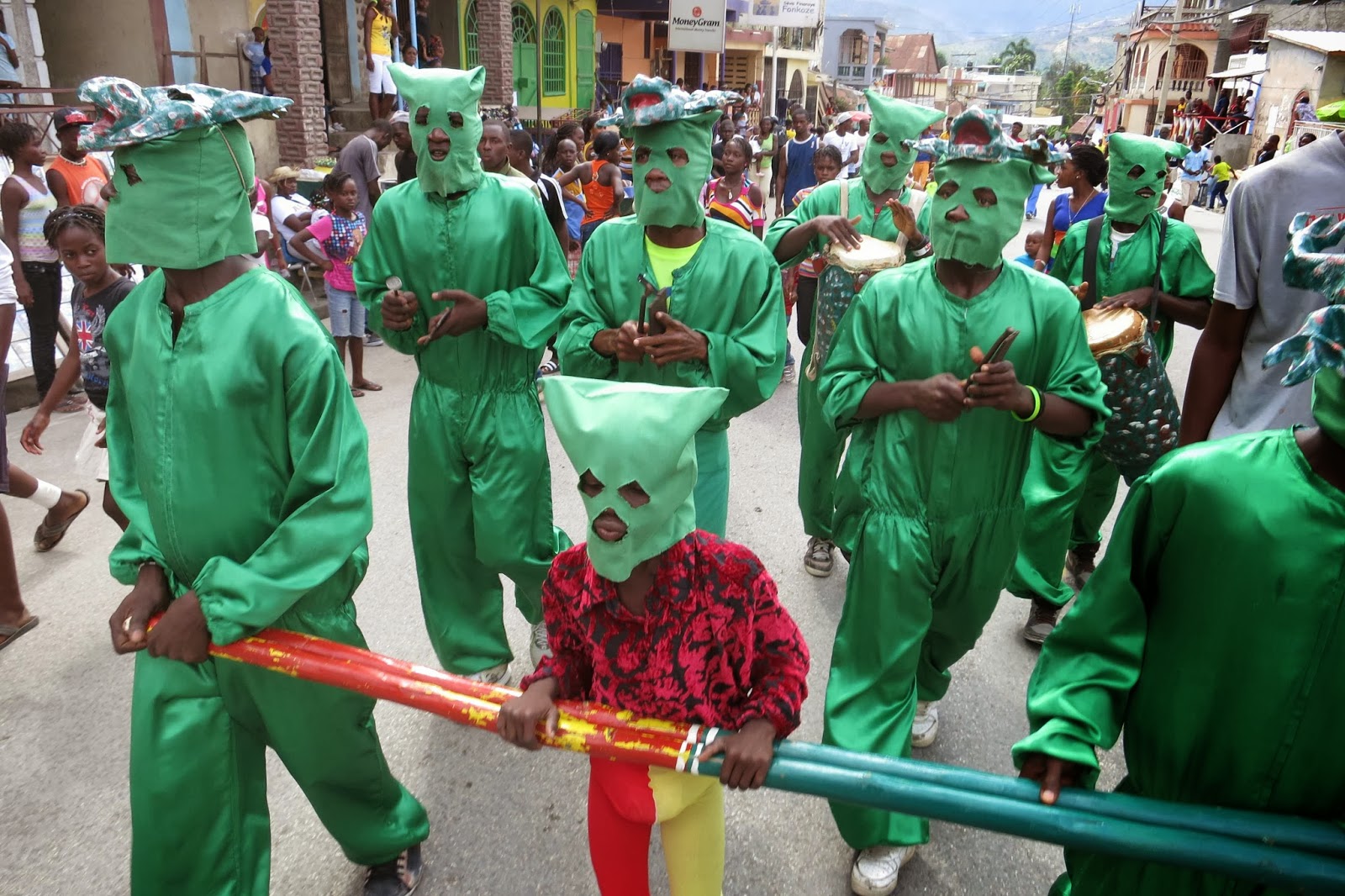 Where else are you likely to find a marching gang of green satin frogs banging bits of scrap metal together and presenting an impromptu parallel-bar gymnastics act? 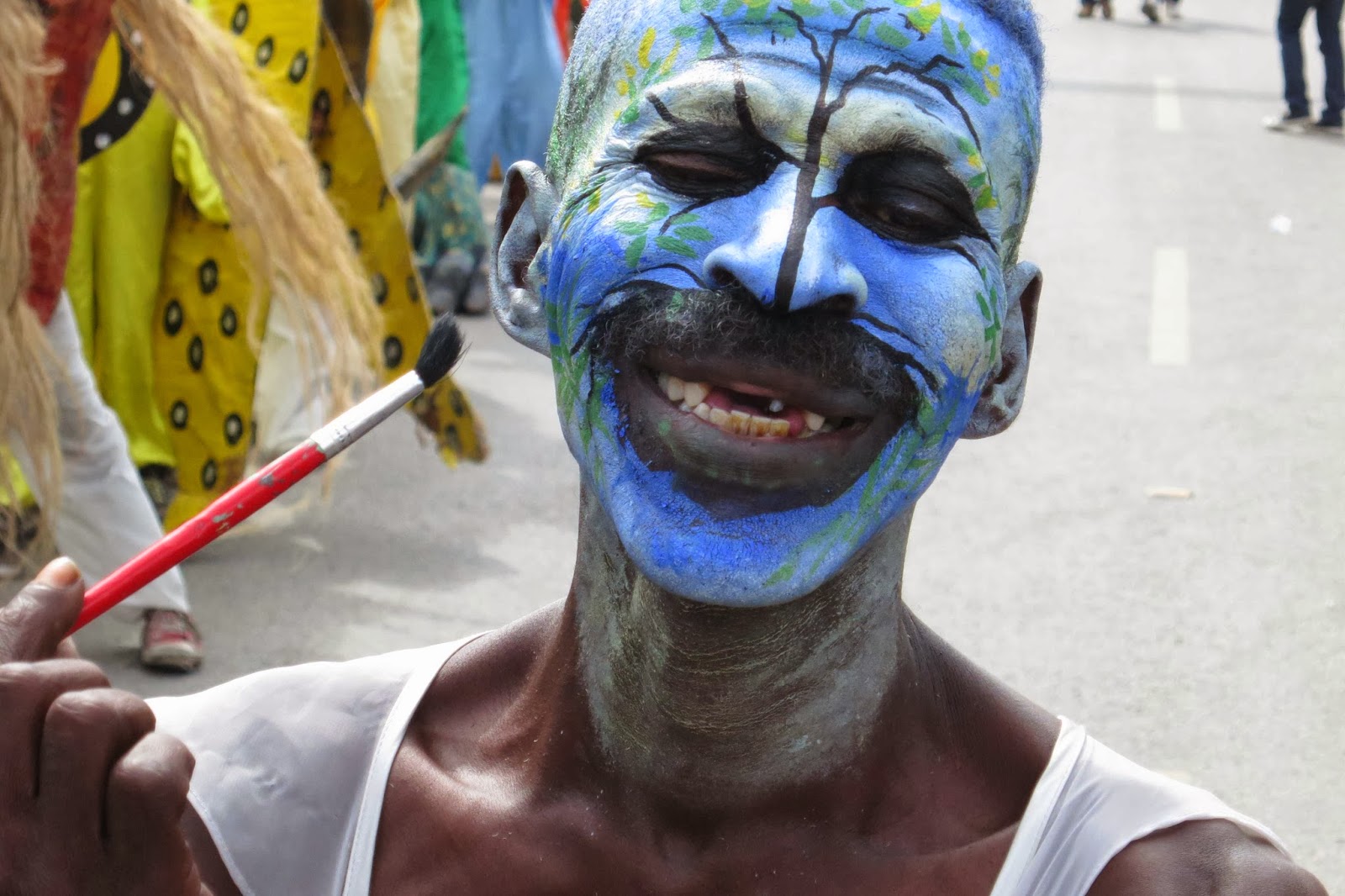 Demented transvestite beautician-arborist? This gentleperson is a solo operator who runs madly up the street cacking to himself, before pausing to touch up his astonishing makeup. 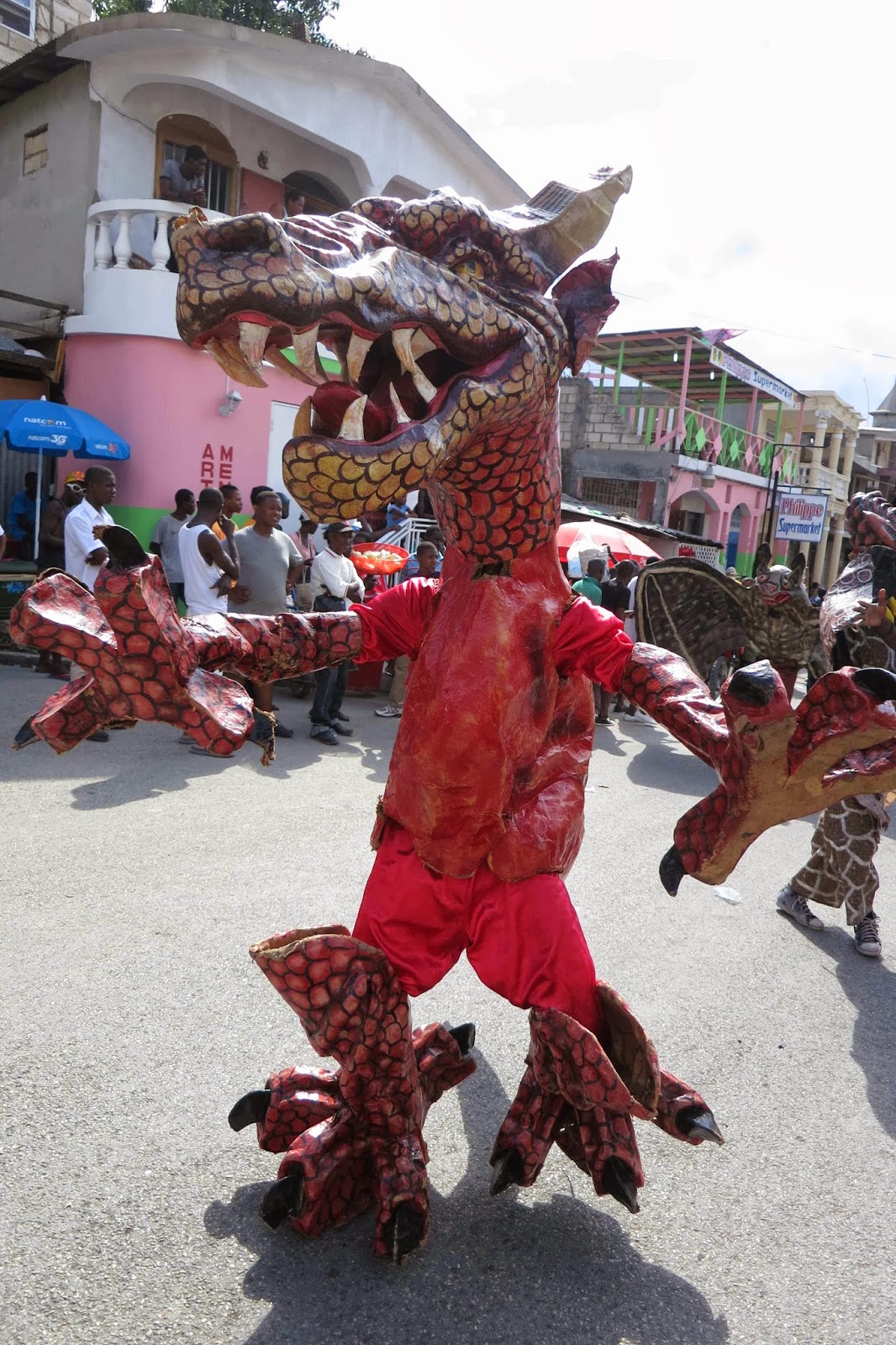 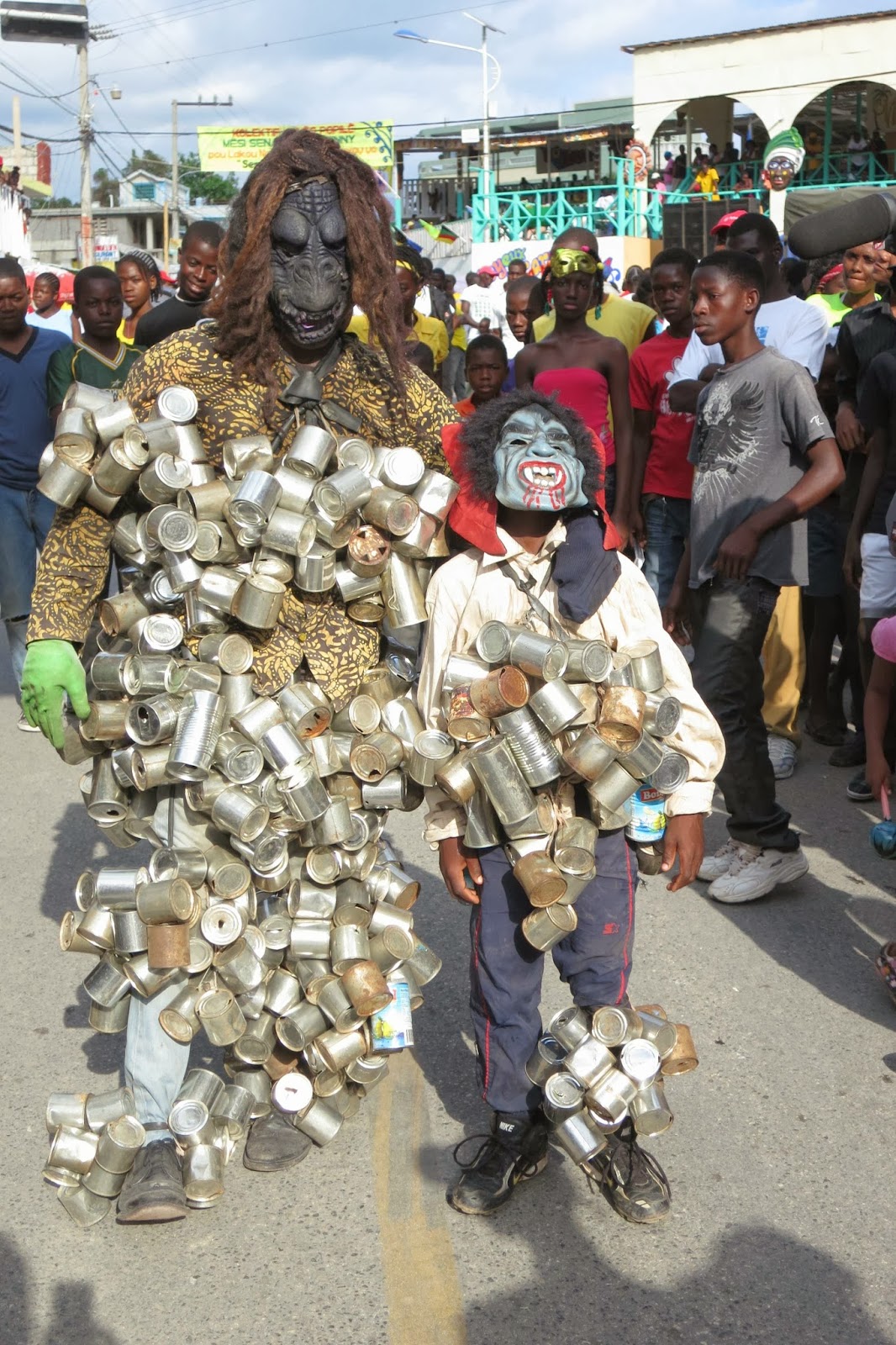 We're really into recycling.
3 Please leave your comments or remarks!