Fighting over gasoline on election day.... 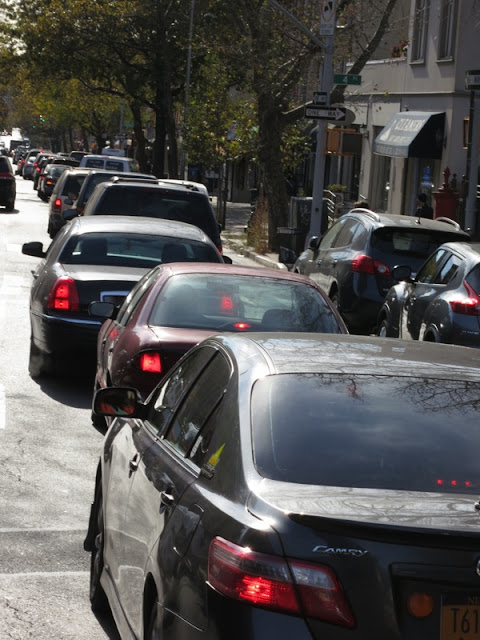 Farther than the eye can see...

I drove out of the neighborhood for the first time since Sandy hit, only taking the car because I needed to drop off some soggy but salvageable possessions at the mini-storage. It was quite a shock. In part because life seems utterly normal in Carroll Gardens, just a few significant feet higher in elevation than my own wet basement. This is in contrast to the constant presence of sanitation workers, FEMA personnel, roving police cars, boots, sump pumps, downed trees, anxious citizens, volunteers, mud and piles of rotten sheetrock in Red Hook.

I went to Caputo's for a sandwich and sat on the roof of the pickup to eat it in the afternoon sunshine. Caputo's is a full five blocks uphill from Hamilton Avenue on Court St., and what looked like the most unholy traffic jam ever to hit the neighborhood was actually, the deli-man told me, the line to buy gas at a distant BP station. I estimated 90 minutes to get down the hill, based on how often the cars moved. What's more, almost of these cars were on, running, idling as they idly burned gas in their urgent desire to wait for an hour and a half to go and buy more gas. Fuming climate-changing fumes out of their tailpipes, with their feet on the brakes. Staggering.

Newspaper reports describe fistfights breaking out in gas lines, and service-station attendants turning off the pumps until the police have restored the peace. Our society has a major addiction problem. This is, at a minimum, a tri-state multi-million person crisis of access to fuel, caused by a minor glitch in the supply chain. We need a major rethink.

The irony is too delicious. An intense storm, likely the result of global climate change caused by the profligate burning of fossil fuels, inspires humans to line up like sheep, and fight with one another like rams, in order to purchase more of those suicidal fuels. Someone is trying to tell us something.
0 Please leave your comments or remarks!