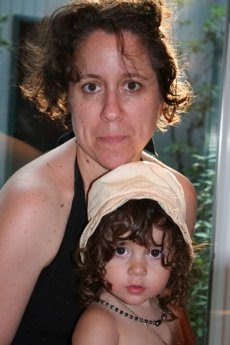 My sister, the mother of my three delightful nieces, who is too busy kicking much ass, writing books, and cashing fat checks to allow her the time for her own blog, today gets much deserved recognition in these pages as the 2008 Runciman Award winner. That is an award for best book of the year,

by the way. Here she is, collecting another of those checks.

The rubber trees shall inherit the earth 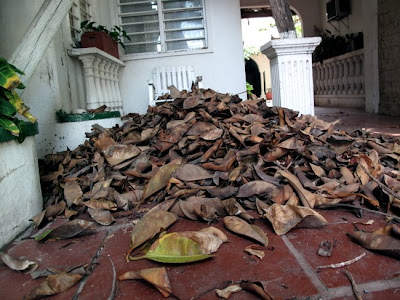 One of the things I like best about the tropics is the sense that nature has a chance in the face of mankind's constant assault. The brute power of photosynthesis near the equator gives one the suspicion that our species' eventual and inevitable passing into extinction will be noted here only by a massive spurt of vines, trees, rot and recycling, until in a few short centuries not a cinder block or slab of asphalt will remain to await the discovery of interplanetary archaeologists. 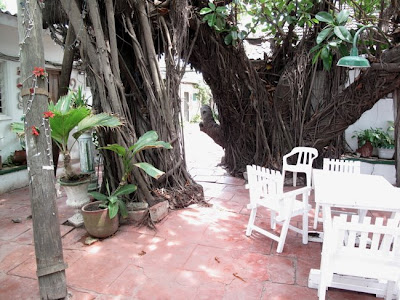 The hotel where I am staying in Cartagena is a riot of buildings and overlapping roofs with multiple patios, all under constant threat from two gigantic rubber trees in the central courtyard. They are the largest I have ever seen, and manage to cast a deep shade across much of the sprawl of hastily conceived additions. They shed prodigious amounts of leaf litter and beefy twigs. 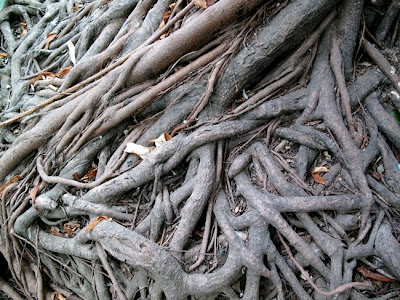 Yesterday, one of the workers here climbed delicately up onto the tile roof to clear it of debris. The leaves of these trees are thick and rubbery like the sap that is tapped from their trunks. They have substance and heft that prevents them from falling far from the tree. Overwhelmed by the piles of litter, my friend on the roof was using a common kitchen broom. It was a Sisyphean task in reverse, pushing the leaves, twigs and sticks off the roof into the patio, only to await the next breath of sea breeze to replace them with another shower of organic material. 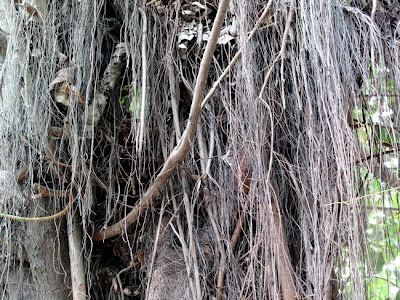 The hefty beams placed to prevent the mighty branches from sagging down and crushing the roofs are as matchsticks, engulfed in a spaghetti of the dangling tendrils from what is rather like a gigantic mangrove tree. These strand-like branches become, upon reaching down to the ground, the roots the tree uses to spread itself. The eagerness and ability of these shady giants to envelop the hotel in their embrace is endearing and unstoppable. 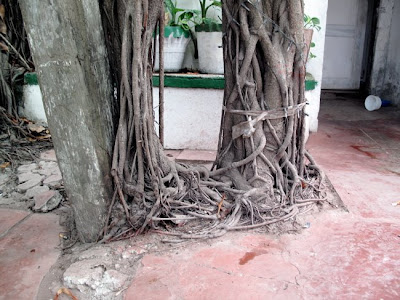 A couple of minor offshoots...

By the way, while our species is still thriving, I highly recommend the Bellavista hotel to those travelers tolerant of cracked, upthrust patio tile and a genuinely welcoming atmosphere.
0 Please leave your comments or remarks!

I just wanted to make a simple phone call...

Some things really should be a state monopoly. Here in Cartagena, Colombia, there are three major cellular telephone operators, Comcel, Tigo, and Movistar. Not unlike Sprint, AT and T, T-mobile and the rest of the New York carriers vying to be the one to drop your call today, except that part of the corporate strategy here for grabbing market share is to penalize anyone who isn't your subscriber every time they call someone who is. In other words, since I'm on Comcel, I can call anyone else with a Comcel SIM card at a quite reasonable rates. If I call someone on Tigo, or Movistar, however, I get whacked. The first digits of the telephone number indicate the carrier; numbers beginning 310 and 311 belong to Comcel, for instance.

An entire business has sprung up to cope with this absurdity; on almost every block is a small-time entrepreneur who has gathered enough capital together to buy at least one phone and SIM on each network. The simplest of these businesses consists of a woman sitting somewhere in the shade in a plastic armchair, with a little disco waist pouch on her lap overflowing with the cheapest Nokias. The more splendid have a cart of some kind, or a card table protected from the brutal Caribbean sun by a small awning. Customers, even those who may own their own phone, cluster around these impromptu booths when they need to call someone outside of their own network, or simply because they have depleted their pay-as-you go funds and don't wish to make the lump-sum investment to recharge their accounts. 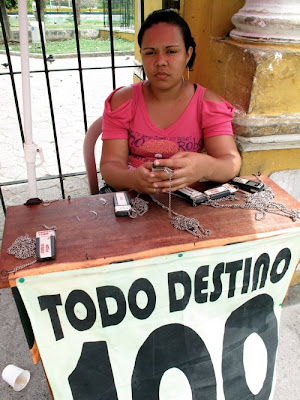 "Wait, let me get this straight: it costs much more to call some numbers than others?"
"Claro," of course, she said, as if I was a small child who understood nothing.
"How strange," I said, but instead it was me that she thought strange. It had never occurred to her, I think, that it would ever be any other way.

To avoid any funny business, like an unannounced call to Australia, the proprietor dials for you. As soon as someone picks up at the other end, you are handed the phone, and you begin to explain why you are not calling from your own telephone number. The less spry proprietors attach their telephones to their chair with lengths of string. The most deluxe operations have chains, an unintended metaphor for your relationship with your "service provider." 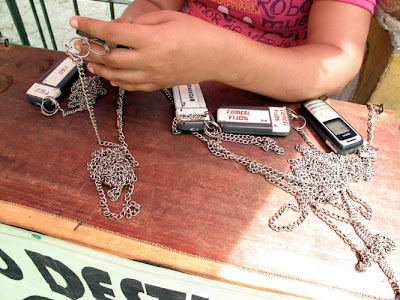 2 Please leave your comments or remarks!

With apologies to Adalberto Santiago and Ray Barretto... 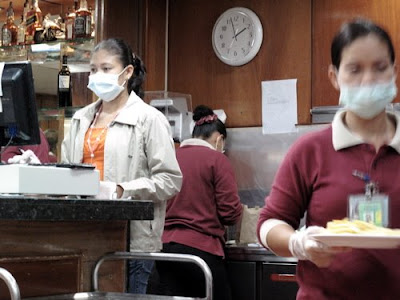 Tucuman International Airport in Panama is a sleepy little strip of duty-free shops, not much more than a hub for Copa Airlines and a chance to buy Lacoste shirts, overpriced chocolate, and digital cameras. Today, however, the place has a gloomy, post-nuclear feel, for in the wake of the H1N1 pandemic the port authorities have apparently obliged their employees and contractors to wear protection; shopgirls hired for their pretty smiles have been reduced to batting their dark latin eyelashes over light-duty dust masks. It is rather surreal and even unsettling to wander through an airport, now filled like all others with luxury shopping, and find that every last janitor and mascara saleswoman has their nose and mouth concealed behind a white shield. 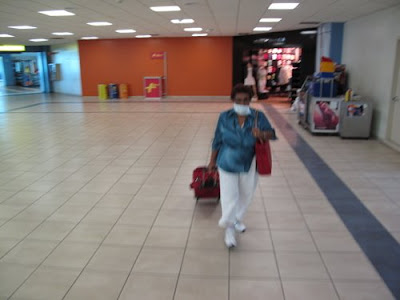 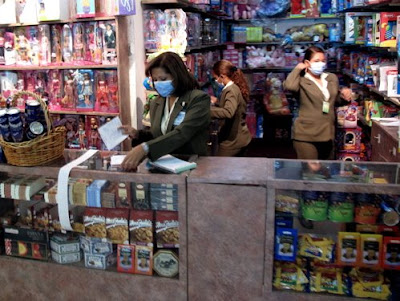 The paranoia is, of course, vastly more infectious than the flu seems to be, with the result that here in this little tropical airport there are more masked passengers wandering about dressed like interns around an operating table than I saw in all of Heathrow two weeks ago, when the flu looked much more like an imminent danger. 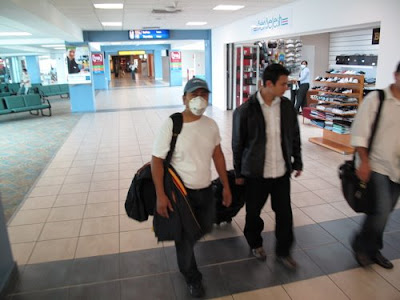 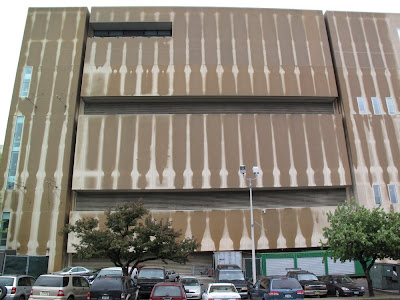 It has rained every single day since I returned from Africa. In Kenya, everyone was waiting for it to rain. Here is the back of the Brooklyn Museum, as seen this morning, viewed en route to buying plants at the Brooklyn Botanical Garden plant sale and warbler-watching in Prospect Park.
0 Please leave your comments or remarks!

Mightiest in the forest 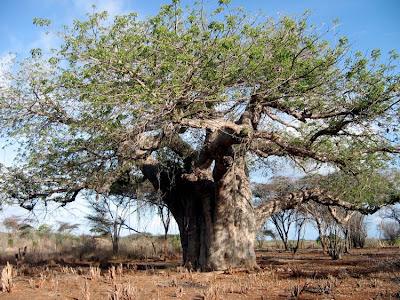 One of my favorite parts of my own book,

if you’ll forgive this self-involved and almost solipsistic observation, is a chapter introduced by various musings on the Ceiba tree, that towering, massive denizen of American tropical forests. In Cuba the Ceiba has been incorporated into both home-grown biblical fable and local folklore, including a Camagüey version of the great flood. It is the only species in which the rare and endemic Giant Kingbird will deign to make its nest, and it is of immense metaphorical and curative value to santeros, those practitioners of African forms of healing and magic imported to the Caribbean by the slaves. The tree is even recognized as its own santería orísha, the deity Iroko. But, as I point out (citing the anthropologist Lydia Cabrera in Walking to Guantánamo), the elder generation of Africans transplanted to Cuba recognized that the Ceiba “is not the legitimate Iroko.” They called the mighty Ceiba Iroko because it reminded them of home, of Africa’s most majestic tree, which grows across the length and breadth of sub-Saharan Africa. 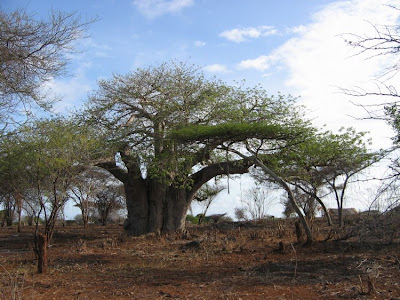 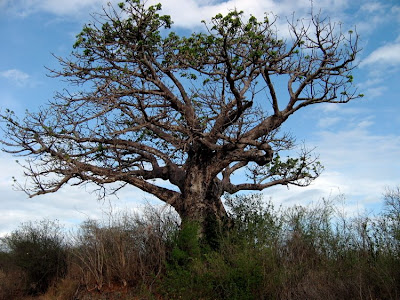 The true Iroko is of course the Baobab. Under the right conditions it can grow to dizzying heights, but the tree is perhaps most impressive for its ability to convert sunlight into raw bulk and girth. The leaves and branches are disproportionately small and spindly in comparison to its trunk, a mammoth woody reservoir from which the tree draws in the extensive months of African drought. On Manda Island, just across the channel from Lamu, where I have been enjoying a few days of pure rest and relaxation courtesy of my old friend Fazal, the Baobabs are not overly tall, but some of them have the diameter of a Midwestern grain silo or the watertowers whose function they essentially share. In the same way that a whale or an elephant can only be seen as an awesome and impressive creature, the Baobab has a dignity, gravity and majesty that befits it as the leader among trees. 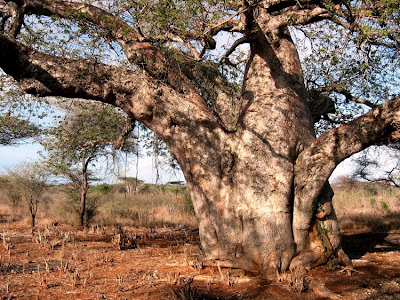