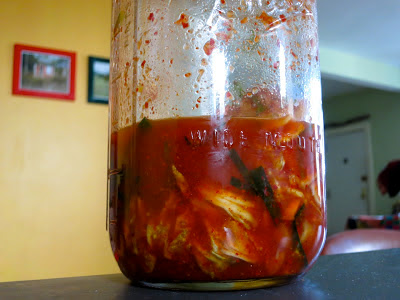 Lately I have been making my own kimchi. Laden with raw garlic and vegetables, naturally fermented and entirely additive free, this spicy Korean condiment is said to be one of the healthiest foods on earth.   Properly made, kimchi is a living creature, a bubbling, blistering Far-East version of sauerkraut, a simple, humble cabbage brewing in its own juices. The thing lives, its flavor constantly altering as desirable bacteria munch and soften the once-crispy vegetables into submission. Nonetheless, I had always thought of it as a substance to be dabbed sparingly around the edges of other dishes, like hot sauce, or mustard.  This despite the fact that it is very easy to make vast vats of the stuff. In Korean markets in Flushing it is sold in quarts and half-gallons and even gallon tubs, and since it is a live ferment in continuous transformation, its shelf-life is not infinite (or even near-infinite, like hot sauce and mustard and ketchup). Connoisseurs believe kimchi peaks after ten days to two weeks, and that month-old kimchi will soon push what is essentially an ongoing process of decomposition into unpleasantly sour and funky realms. I determined, therefore, that I have been thinking about kimchi in the wrong light. It is not meant simply to accompany, to drizzle or augment. At least in Korea, it is to be munched with abandon, spooned up by the tubful, spread in thick slabs. If not, what to do with tremendous volumes of it?

I remember a perhaps apocryphal story, told to me before I really knew what kimchi was, about the abundance of garlic in Korean cuisine (in which kimchi is arguably the primary vector for garlic-delivery). A British ambassador to Korea, back in London at the end of his tour of duty, attended the opera. There, seated in his tuxedo on the ruby and gold-brocade chairs, watching the performance unfold, he discovered that he and his elegant wife had become pariahs. The stodgy Britains seated within their orbit were, despite the embarrassment of it all, getting up and abandoning the theater. So strongly did the diplomatic couple reek, with the garlic of dozens of Korean state dinners positively leaching out of their pores, that the other patrons departed well before the fat lady sang. 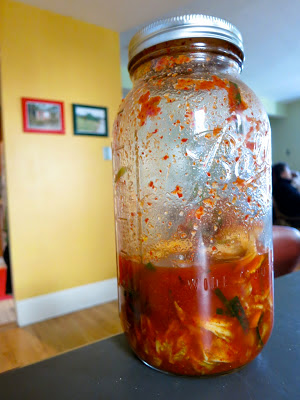 Gradually, I am becoming less obsessed with ethnic culinary authenticity, but one still wants to know if one's kimchi would fly in Incheon. I consulted with some Korean-Americans of my acquaintance. Sohui Kim, chef, neighbor and co-founder of the always excellent Good Fork restaurant (she does a killer steak with kimchi rice) declared it delicious and tasty, if rather too sweet. A few days later, tasting the same batch, the artist Nancy Hwang also questioned the sweet edge to my kimchi*. Then she said: "have you made kimchi tig-eye yet?"
"Kimchi what?" I sputtered.
"Oh that's one of the best things about making kimchi," she said. "You wait until it is almost too funky too eat, and then cook it down, usually with pork. It's the best." 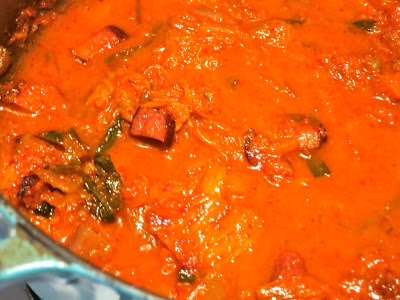 When cooked, kimchi takes on an almost lurid, orange hue

When I typed in "tig-eye," Google corrected me, and I learned the Korean word for stew: Jjigae. Kimchi Jjigae, specifically, is the cure for those large, late-stage volumes of kimchi, which, like bread starter, gets more and more sour the longer it ferments. An indefinable moment arrivess when the stuff just gets too damn funky, the sourness oppressive. It is then time to make kimchi stew. 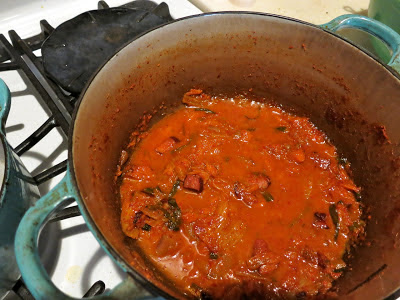 Due to how ridiculously delicious this is, this pot of kimchi jjigae was almost completely consumed before I remembered to photograph it It's a good thing there's anything left in the bottom of the pan.

There are many kimchi jjigae recipes online, with various added proteins, ranging from pork bellies to silken tofu. Some include both. I didn't have any tofu on hand, but I was recently returned from New Orleans, with an armful of smoky, cajun pork products. I chopped a wrinkled slab of tasso and a couple of onions and sauteed them until the onions were browning around the edges and the tasso had darkened and began offgassing tantalizing smokehouse aromas. Then I chopped about three brimming cups worth of three-week old kimchi and stirred it in. At this point, the Jjigae is all but finished. Just add water** sufficient to make your dish have a nice, soupy-stewy consistency, bring to a simmer and let bubble for five to twenty minutes. Serve with rice. 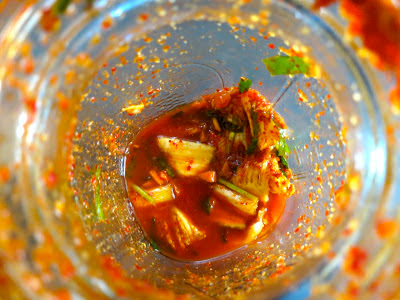 Looking down the barrel of kimchi oblivion. To the very bottom of a half-gallon jar. It's clearly time to make more.


*I've been experimenting, and none too scientifically. I have a vague recollection of adding a dollop of gochujang to the brine in this batch. Gochujang is basically hot pepper paste sweetened with corn syrup, and I've since been informed that adding it to your kimchi is highly unorthodox and would certainly result in that notably inauthentic sweetness.

**You can also add my new favorite substance, and word, gookmool, which are the intense kimchi juices that collect as a slurry at the bottom of the kimchi jar.
1 Please leave your comments or remarks!