On the Streets with Camilo J. Vergara 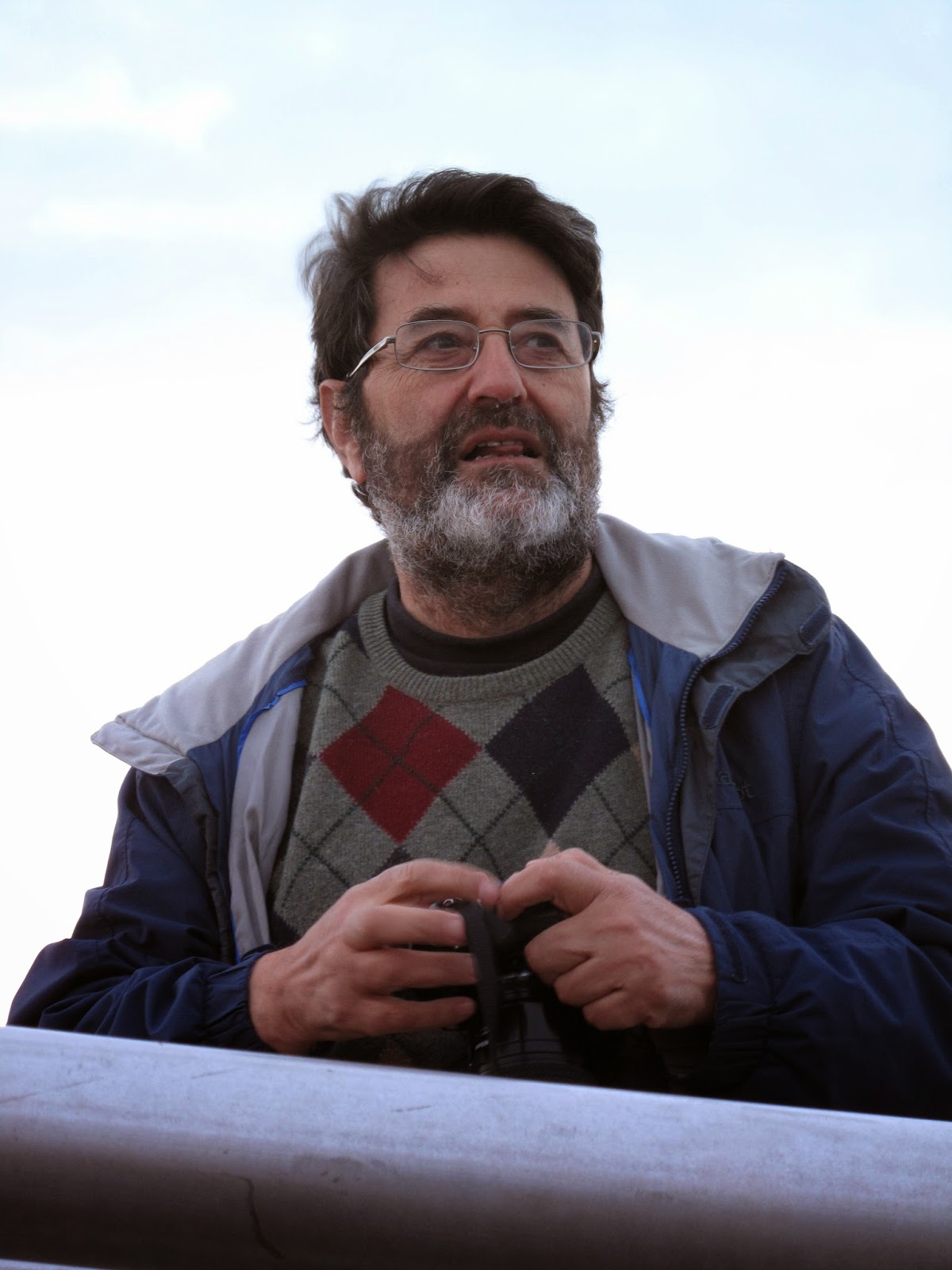 Standing on the corner of Adam Clayton Powell Jr. Boulevard and 130th St., in Manhattan, a good approximation of the geographic dead center of Harlem, the photographer Camilo José Vergara is looking around with a puzzled expression on his face. At 70, he's been photographing and rephotographing the streets, landmarks and avenues here for more than forty years, and he knows every corner. Now he is all but scratching his head. "I wanted us to look at something," he says. He's been giving me a tour of the latest incarnation of "new" Harlem. "But I'm not seeing it." Whatever it was is gone. He seems truly distraught: "It's just not there. That's why it was so fucking disorienting!" We hurry back up the sidewalk and across the street. On the east side of the Avenue, stretching for two full city blocks, is a wall of blue-painted plywood fencing, marking an enormous construction site. It is as if a huge tree has been felled in the forest, so that along the north side of 132nd St. the low winter sun shines warmly on the red brick and brownstone of classic Harlem. Through a cutout in the fence can be seen a vast hole in the ground, lined with the cement of a new foundation. "This was the Lafayette Theater. Right here. And it's gone.”

To describe the Chilean-born Vergara solely as a photographer is to minimize his extraordinary achievement. Part ethnographer, part sociologist, obsessive documentarian and full-time chronicler of the declining American city, Vergara has been fully embraced neither by the world of art photography nor by that of journalism or academia. Taken alone, his images often appear mundane, little more than generic streetscapes populated by minorities and the small, peripheral businesses of the American urban fabric: hair salons, corner bodegas, greasy spoons and burger joints. “A photographer is somebody who cares about making beautiful pictures,” Vergara says. “I'm not that.” Despite this demurral, which I only coaxed out of him after sharing a couple bottles of fine red on my back deck,  Vergara has published six major photo books, and in 2002 he was the recipient of a MacArthur fellowship, the so-called “genius award.” In July 2013 he became the first photographer ever to be honored with the National Humanities medal. But in his latest book, Harlem: The Unmaking of a Ghetto,

he writes that when he began focusing his lens on the built environment he was dismissed as “a real-estate photographer.” It's a line I think he might have gotten from his good friend Ben Katchor, fellow genius-award recipient and the creator of the sublime comic strip character Julius Knipl

. Eerily, like Knipl, who Katchor created years before the two met, Vergara's daily routine is to go out into America's cities with a camera and take pictures, largely, of buildings. Looked at as a whole his enormous archive is an unequaled and irreplaceable catalog of the vicissitudes of an urban United States routinely overlooked, downplayed and marginalized.

Over the past few years, I've gone out a few times with Camilo as a sort of chauffeur-sidekick. My late-lamented little red pickup truck was already so battered that any extra dents Vergara made standing on the roof to take pictures merely added to its aura. A trip we made together to Camden, NJ was something like driving through an episode of The Wire. Entirely unlike the real-estate boom town that is Harlem today, the small and shrinking city is a dingy, derelict place just across the river from Philadelphia. As we drove past crumbling houses and weed-choked sidewalks, he explained that “Camden has always only existed to service the needs of Philadelphia.” Once it housed print shops, shipbuilders and light manufacturing, but the jobs, and even entire industries, began to dry up in the 1960s. Now, on some of the streets Vergara had me drive along, the only signs of economic life were prostitutes and streams of crack and heroin dealers who jumped down off of rotting porches to approach the car, confident that nobody other than a customer would ever bother to cruise their notorious block. On several occasions, Vergara pointed his camera into a vacant lot, aligning the view with the help of slides made on previous trips, and showing modest brick houses where there were now piles of rubble. The city seemed to be disappearing before our eyes. 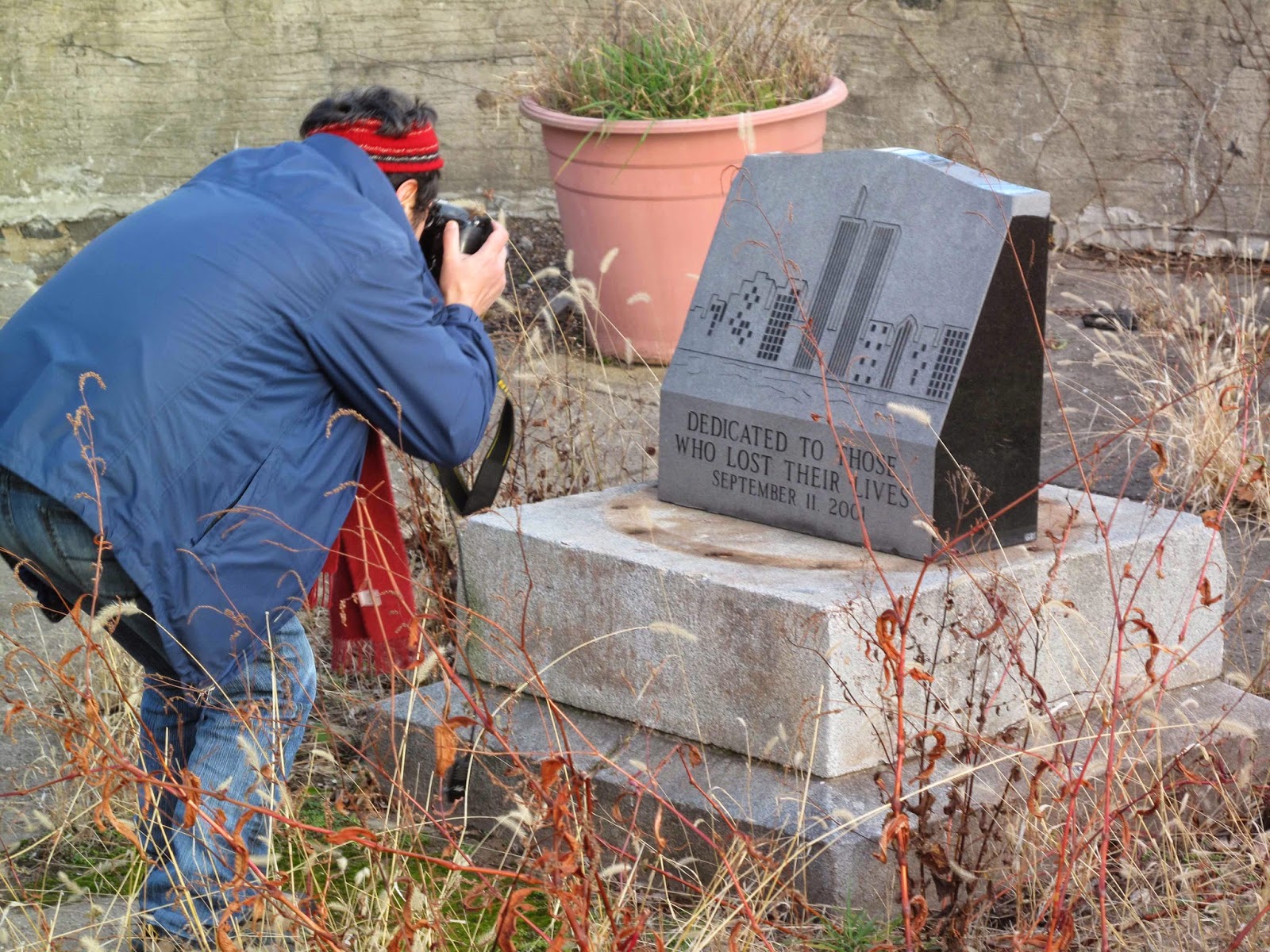 On another trip, to Jersey City, behind the vast high-school that looks down onto the traffic waiting to pass through the Holland tunnel, we discovered a rather sad and unkempt 9/11 memorial. Vergara observed that it had probably begun its pre-ordained decline as soon as it had been installed and celebrated, almost as soon as some gaggle of earnest potentates had wandered off after a moment of silence and some minor speechifying. A plinth that perhaps once held a flagpole, complete with rusty bolt holes, now held a granite monument that had clearly been commissioned from a tombstone carver. It sat in the sort of tucked-away and neglected area used by students as a place to sneak away and share a joint. Two plastic tubs containing weeds and dead houseplants completed the tableau. 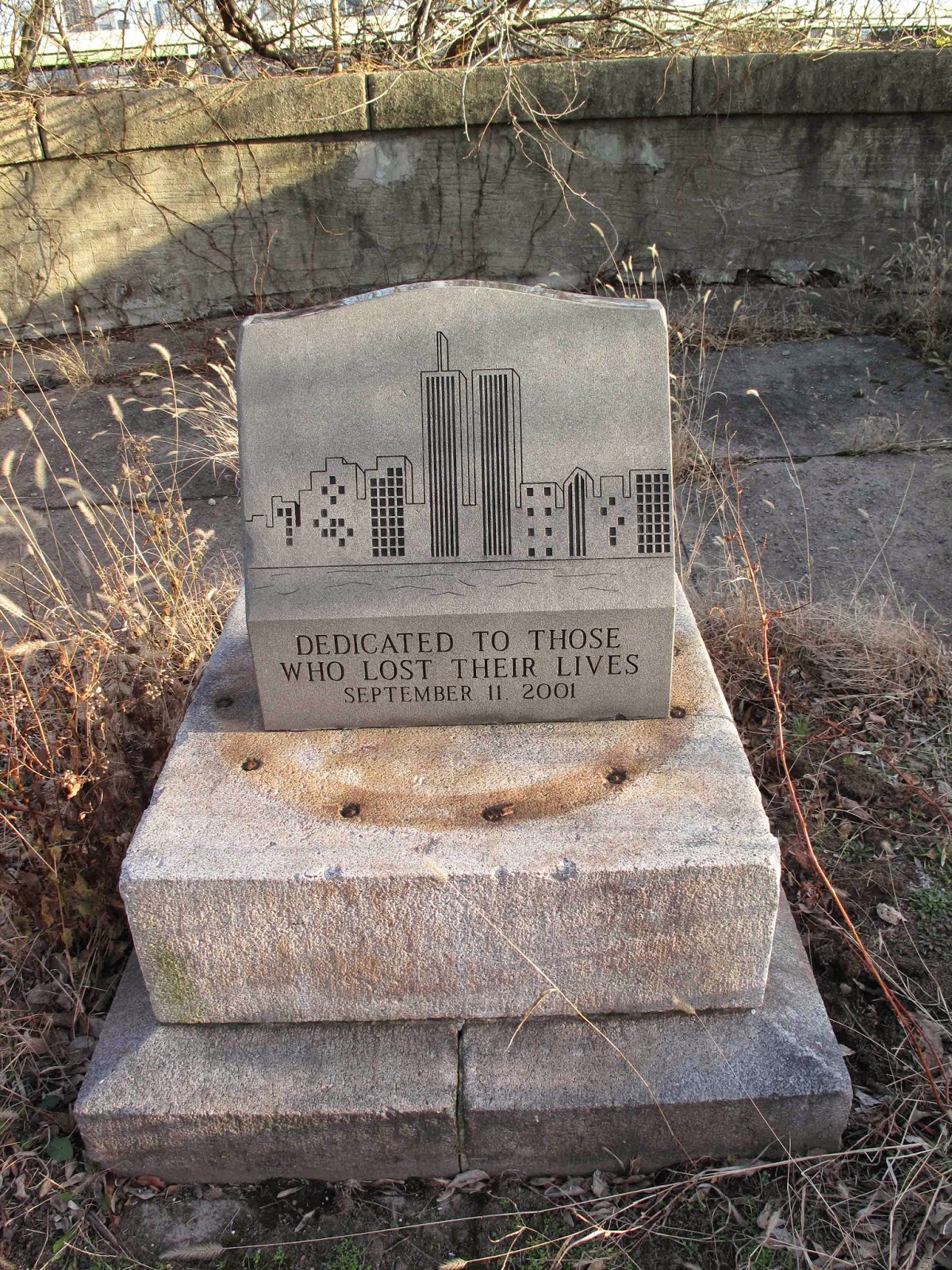 Again and again Vergara returns to the same streets and ghettos. He has worked primarily in New York City, Newark and Camden, NJ, Detroit, Chicago, Los Angeles and Richmond, CA, always in inner city neighborhoods that rarely make the news for much other than violent crime. He has documented housing schemes built and demolished, the slow deterioration of entire blocks, the rising tide of gentrification and the puddles of poverty left when that tide goes out. His groups of images, charting a single building or stretch of sidewalk over decades, become miniature time-lapse documentaries, simultaneously about nothing while encapsulating everything from fashion and diet to urban planning and city politics. In these pictures, sometimes taken decades apart, Vergara demonstrates the same relationship with specific modest buildings that most people only have with their children. He notes their tiny advances, their gradual changes, and he documents them. It's a strangely intimate relationship with his urban surroundings. The fonts lettering the storefront churches, the meals advertised for sale, the peeling paint and the shoes on the feet of the passersby suggest the ebb and flow of aspirations, achievements and illusions. “By taking a picture of a building,” says Vergara, “you begin to establish a trajectory.” 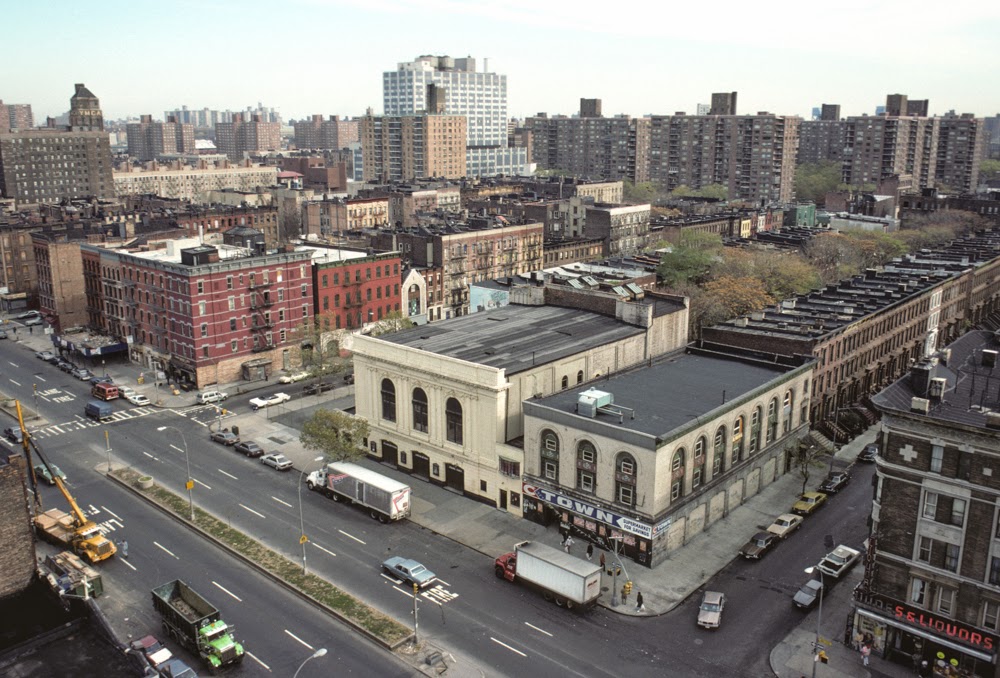 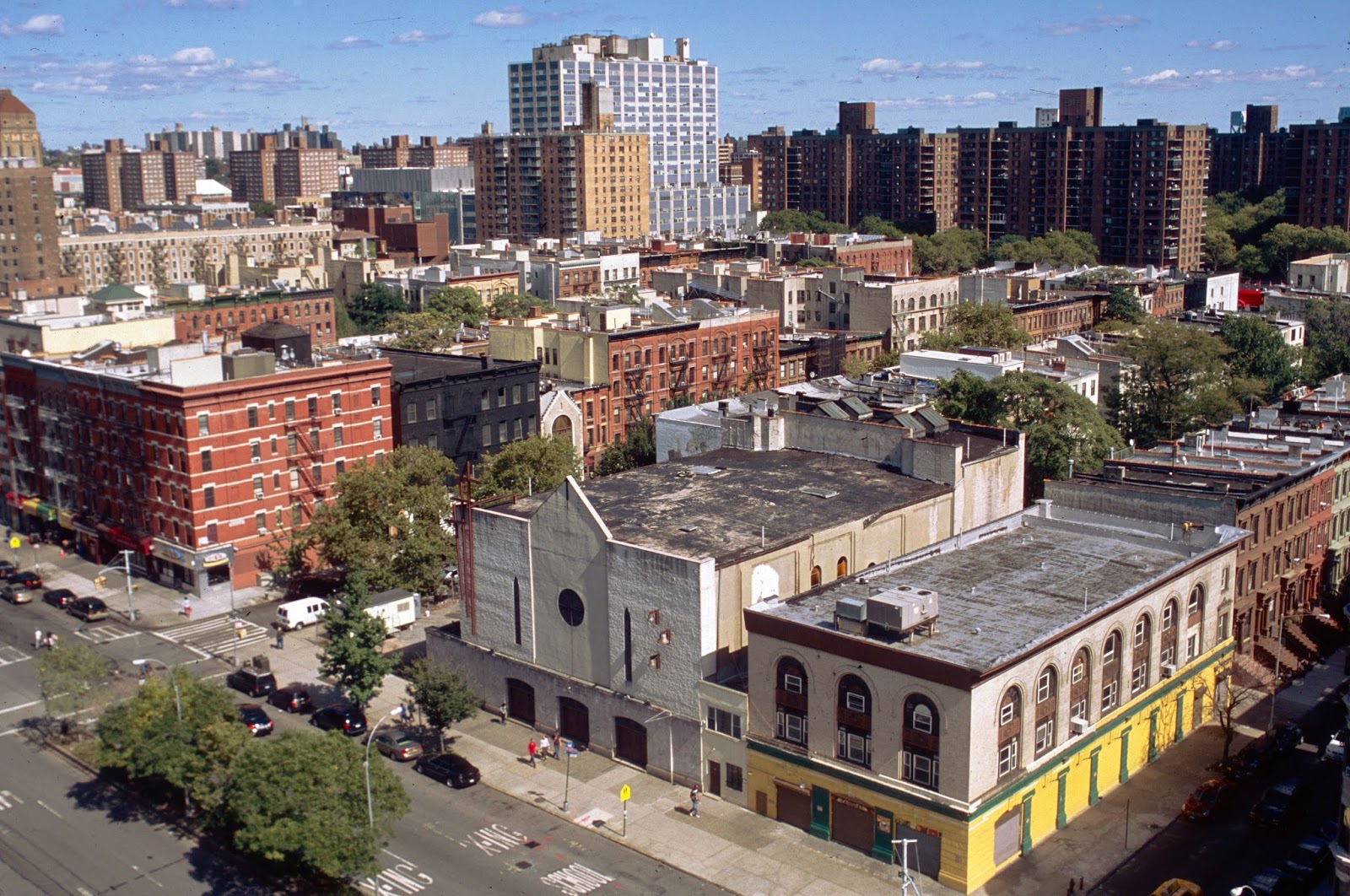 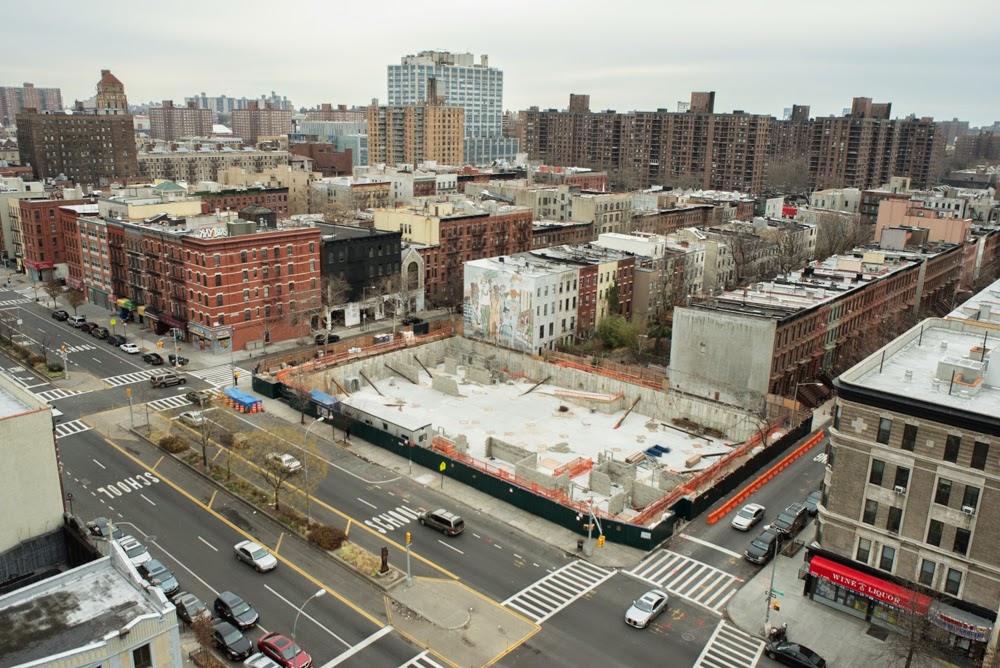 Coming soon to a vacant lot near you. Condos! Three views of the Lafayette Theater site courtesy of and © Camilo J. Vergara.

Back on Adam Clayton Powell Boulevard, Vergara seems to take the disappearance of the Lafayette Theater personally. It's part of what he calls the “Disneyfication” of the neighborhood. Harlem is being sanitized, he suggests, its rich history and architecture erased by condominiums, its legacy concentrated in a few untouchable icons like the “world famous” Apollo Theater, the emblem of Harlem on its most famous street, 125th. “We've designated a place to be the repository of history, so we can change the rest,” Vergara explains. “The survivors become more powerful. It's like wealth, it's like an inheritance.” It is interesting to note that the disappeared Lafayette was the first New York theater to integrate racially, as early as 1912, more than twenty years earlier than the Apollo. While Vergara agrees that the new Harlem of luxury condos and espresso bars offers a better standard of living than the one of burnt-out tenements and trash-strewn vacant lots that he started photographing in the early 1970s, he feels acutely a tension between the destruction of the historical landscape and the preservation of culture. In this way his work writes an alternative history, one that questions our dominant economic and political assumptions that equate progress with expansion and development. 125thStreet, once an ever-evolving jumble of mom and pop shops, soul-food eateries and African hair-braiding palaces, was a place with its cultural DNA engraved onto the landscape. In the new Harlem, traces of that landscape linger, but the view is dominated by many of the same huge national chain stores and franchises that are to be found in any saccharine suburban strip-mall. Near the former Lenox Lounge, another shuttered landmark farther south, Vergara gestures across the street. “I have pictures of a guy standing in a yard on this block, next to a scarecrow,” he says. “And now it's a Starbucks." 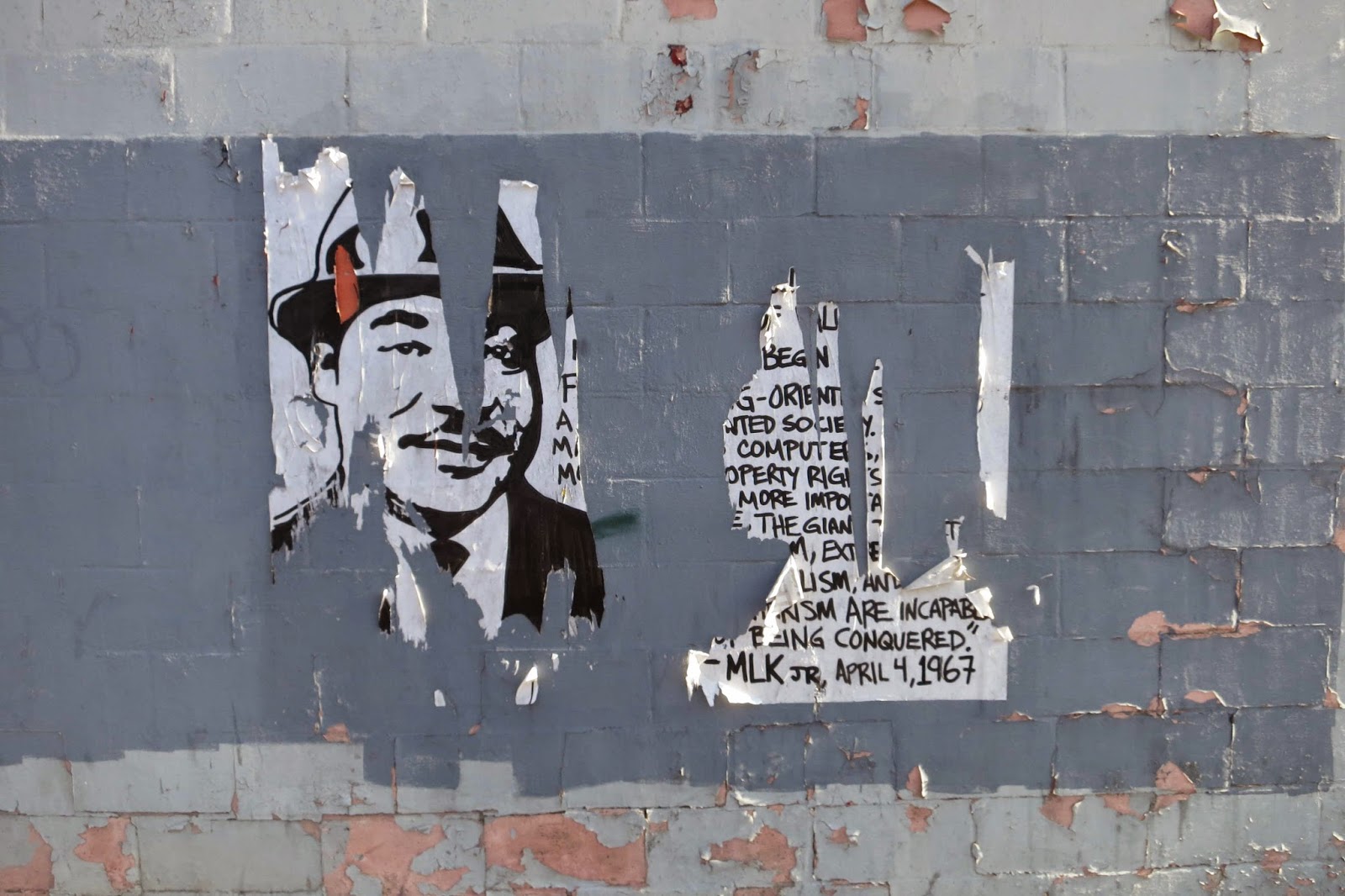 The gentrification of Harlem is only one of countless stories Vergara is able to tell with his enormous archive of images, and they aren't all about the ebb and flow of neighborhoods. A 2012 exhibition at the New York Historical Society showed murals of Martin Luther King Jr. painted on walls all over the United States. Just the varied contexts in which the untouchable civil rights hero was to be found is fertile ground for sociologists. In latino neighborhoods, MLK appeared browner skinned, in the company of notable latinos. Other, early murals show him with Malcolm X; more recent ones show him with Barack Obama. A timeline of black heroes emerges from looking at the images, with the others, the not-Kings, going in and out of fashion, but always basking in King's glory. In How the Other Half Worships,

(Rutgers University Press, 2005) Vergara mines the typology of inner-city storefront churches. The book is a demographic goldmine that charts the hopes and aspirations of faith on a low budget. Modest cinderblock buildings make humble attempts at spires. Cornices and stained glass windows are installed, renovated, then obliterated. Signage changes from hebrew, to english, to spanish. “A one shot view of anything is not that interesting, because what does it say?” Vergara asked me, rhetorically. “It says, well there are beautiful things here, or there are interesting things here, but it doesn't give you any sense of time. And that, after all, is what really gives meaning to things.”

I'm grateful to my old friend Alice Arnold, who first introduced me to Vergara's work, almost fifteen years ago.

Camilo has written me with a couple of corrections. I had him down as 71 years old, but apparently had added an as-yet unlived year. I have corrected his age, above. He also wrote, in defense of Camden, that the city "was not there to serve the needs of Philly. It was a world recording capital, one of the largest shipbuilding centers in the US, a center of the leather industry and of the Ham radio industry. In its time, a little silicon valley." All of this is likely true, but I have not corrected the somewhat contradictory quote, which comes directly from my notebook. From job-lot printing, toxic dumping and mob-controlled carting to crack-dealing and streetwalking, Camden has a plenty long tradition of being a tortured industrial appendix to Philadelphia.