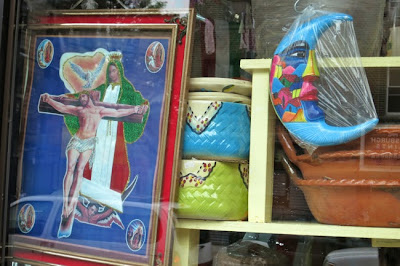 Down in deepest Sunset Park the other day, I pulled the car over to send a text (don't text and drive, kids!) and found myself parked right in front of a Mexican specialty store. From the contents of the front windows, it looked like its taste in Mexican specialties ran pretty deep. I'm a sucker for that stuff, so I ponied up for 15 minutes worth of parking credits and went in to check it out. With an unpronounceable name like "Plaza Xochimilco,"* it's a fair bet the place was not designed or stocked with gringos in mind. I was not disappointed. The shelves held dozens of varieties of dried chiles, obscure brands of Mexican soda pop, nixtamalized corn,** molcajetes and nuestras señoras de Guadalupe up the ying-yang.

In the front was a fridge case with plastic bags full of fresh epazote and papalo**, this year's most fashionable Mejican ingredient out on the west coast, but one still near-unobtainable around this way. I had some in a sandwich at the Red Hook ball fields a few weeks ago, and have been on the lookout for it ever since. In the front window was a poster for Carlos Menchaca. His is a smiling face I got to know well, almost a year ago, after Red Hook was walloped by hurricane Sandy. Menchaca was the guy who marshalled the large quantities of volunteers who came down from dryer neighborhoods to help clean up the hood. Tireless and invariably pleasant and friendly while surrounded by mountains of soggy rubble and dozens of eager-but-anxious volunteers, all raring to go, with nobody quite sure yet what they could do, Carlos brightened the mood when a lot of us residents were wandering around wondering if we would ever again live in our houses, drink in our bars or eat in our restaurants.

I don't frankly know if he had already considered running for office, or if this experience of organizing and helping people pushed him in the direction of city government, but he's getting my vote. It won't be easy. City Councilperson isn't exactly mayor or president, and most people, I fear, will vote for the incumbent simply because they may have heard of her.**** 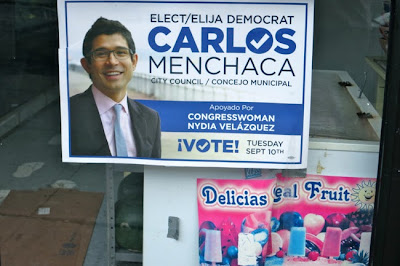 Carlos lives in Red Hook now, having fallen in love with the neighborhood in those trying post-Sandy weeks. I'm not surprised to see his posters in most every neighborhood window here, but I was surprised and pleased to see his face behind glass in the demographically very, very different depths of Sunset Park. I think he's going to get elected. He helped us. You should help him. 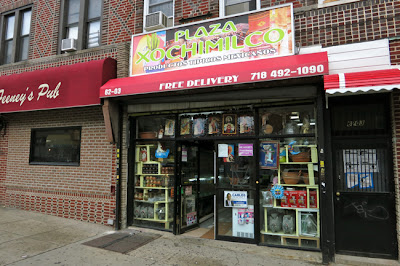 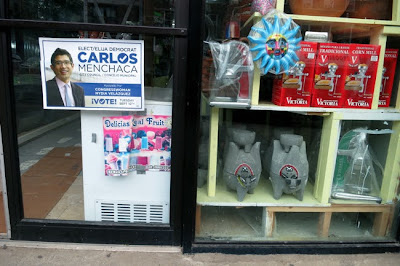 *I'm going to go with zhou-chee-mil-co. For all you would-be papalo-purchasing punters, it's on 5th Avenue between 62nd and 63rd. (Brooklyn, obv).

**I've only just noticed that "tamal" is embedded within this word.

***Known to some as "summer cilantro", this may be a bit of an acquired taste. This weekend, my sister told me "your corn salad tastes like soap." Well, maybe, but if so that would be a cilantro-grapefruit artisanal body bar.


Cut the kernels from the cobs of corn. Chop red bell pepper and red onion very fine. Chop papalo into fine shavings. Halve the cherry tomatoes. Mix well in a bowl. Juice the lime and mix with the olive oil, salt, and pepper to make a dressing.
1 Please leave your comments or remarks!