The Wall Burners of Camden 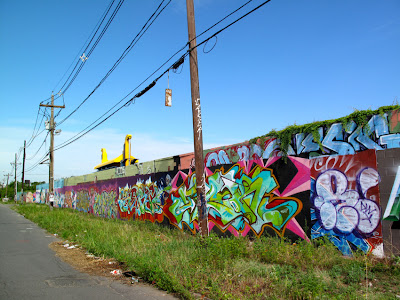 The Manhattan subways have been all but graffiti-clean for close on two decades, at least the rolling stock. (Cars that are painted in the dead-of-night are immediately removed from service until cleaned). In my rugged youth, I quite liked the chaos of riding in a subway car whose contours, doors, maps, seats, warning signs and windows were buried under a miasma of tags, inch-wide marker strokes and spray-painted curiosities. The dense lattice of indecipherable texts were their own advertisement; the ensemble announced that you were living on the edge, in an overwhelmed city, a place at once vibrant and out-of-control. This was New York in the 1980s, a place far scarier than today's city, but more alive, more thrilling and unpredictable. (I'm aware that this is the classic lament of any middle-aged person throughout history, that their formative decade of entrance into adulthood was the most vibrant, and raw, but who would disagree that today's clean and shiny subway cars are but the tiniest indicator of the ongoing sanitizing of our city?)

In the 1980s the most adept graffitists came out of the ghettos and into the galleries. Guys who in the middle of the night risked german shepherds, barbed wire and prison time in their quest for the fleeting glory of seeing their name ride by on a train found themselves suddenly invited to fly to Amsterdam and sip white wine with museum curators. Op-editorialists argued about whether graffiti was art or plague, as if it couldn't be both. Meanwhile the MTA spent more and more dollars trying to keep the trains clean. They tried space-age coatings, attack dogs, advanced stainless-steel treatments and multiple rings of perimeter fencing around the train yards, until the resting subway fleet was as well-protected as Riker's Island. (If you were caught after getting through all the defenses of the former you then became eligible to try and escape from the latter).

The graffiti-eradication budgets ballooned. Slowly the vast resources of the transit system prevailed. The immediate and rigorous quarantine of "infected" subway cars and the MTA's gigantic buffing machines destroyed countless masterpieces before they ever rolled down the line and into the public eye. But simultaneous with the cleansing of the trains, graffiti was going international; youth inspired by the 1970s New York legends were painting on walls, bridges, overpasses, storefronts and derelict vehicles from Romania to Australia. 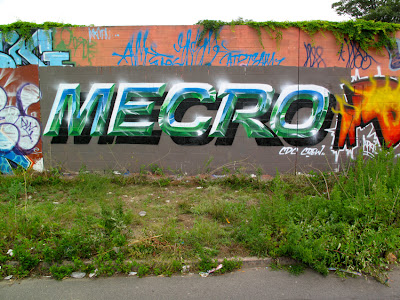 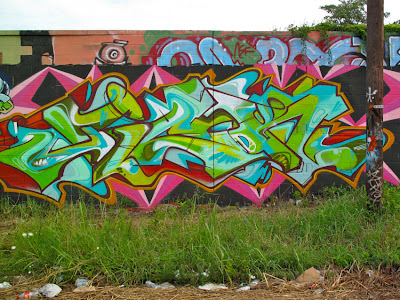 "Above-ground" graffiti was never as interesting to me as the full-car canvases that once rolled through the tunnels of New York, and I rather lost interest in the phenomenon. As an art-form, graffiti has the most in common with Chinese calligraphy. Marking a clean line with a spray can demands the same combination of precision, speed, and commitment that underpin the zen master's slash of camel hair brush on paper. In both, tentativeness is the greatest weakness the artist can show. In both, the form and shape of the letters eclipse their meaning. The motion of the artist's hand is implicit, and supreme, in the finished work. Graffiti is all about this motion, and it is about the fame of the letter. To use a train as a canvas was first to put the motion into the letter, and then to put the letter in motion, to send word of one's existence and talent from the margins to the heart of the city. Without the train, without the awe and surprise of standing on a midtown platform as the subway pulled in, bringing the revelation that every square-inch of its surface had been carefully, masterfully, coherently, freshly and lovingly painted, graffiti literally lost its dynamism. 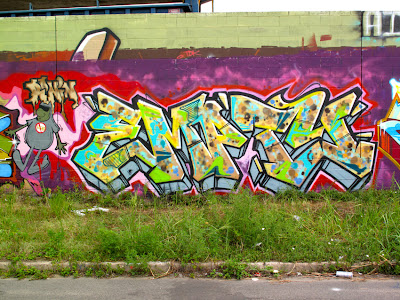 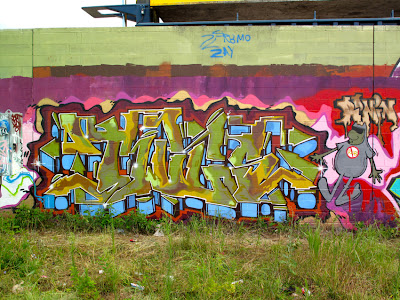 But sometimes I'm still awed. Around the country and the world, well-known to "writers," are walls comparatively free of the buffer and the white-washer. These graffiti walls of fame can have long lives. Sometimes they develop in collusion with the authorities. If given a remote corner of industrial wasteland to paint as they wish, the thinking goes, the graffitists will be less likely to vandalize the bank downtown. In other places, authority is simply overwhelmed, as New York was in the 1970s. There is more to worry about than paint, and less to worry with. Camden, NJ, is a place like that.

Graffiti removal cannot be high on the list of priorities for the government of that small city. I spent a couple of days in Camden last week with my friend Camilo José Vergara

. He has been regularly visiting for some thirty years, photographing the fortunes and misfortunes of this little-known but staggeringly blighted place. Once a thriving blue-collar appendix of Philadelphia, the city has lost the vast majority of its once-diverse industrial base, half its population, most of its tax revenue, its reputation and its pride. The landscape will be familiar to anyone who has seen "The Wire," or watched Baltimore go past the windows of the Amtrak. Weedy vacant lots are punctuated by countless empty, doorless buildings with jagged holes and blown-out double-pane windows; boarded up storefronts, the plywood that was long ago nailed there to prevent egress now itself ancient and weathered and warped and curling away from the facades; enormous factories, burned to the ground, with melted and rusted i-beams curling skyward from perilous mountains of brick rubble. Prostitution and drug-dealing seem to be the most thriving and visible of the few remaining commercial ventures. 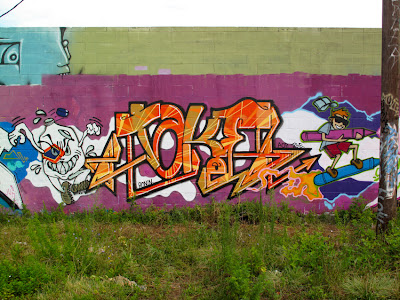 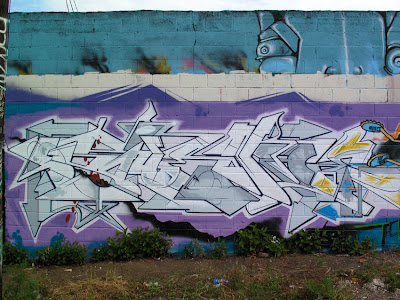 Here, among auto scrapyards and vacant lots, Camilo guided me to an epic "wall of fame," a place graffiti artists from all over the tristate area, and perhaps beyond, have been coming for years, to paint and repaint hundreds of yards of cinderblock wall. Few people likely see this work besides other artists; it is a kind of constantly evolving collective scrapbook of wall-art, as impressive in scope and scale as anything a major museum could find the outdoor space to present. 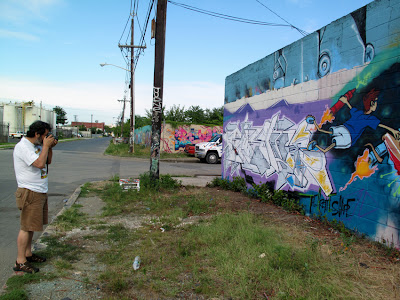 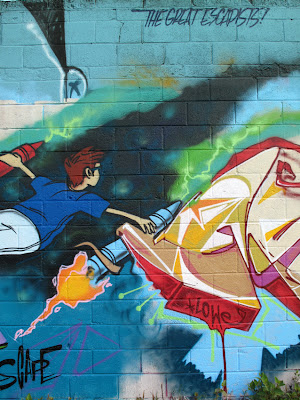 "The Great Escape," detail. As Camilo put it, here a Peter-pan like figure rides rocket-like crayons up into outer space, as if metaphorically managing to get out of Camden. 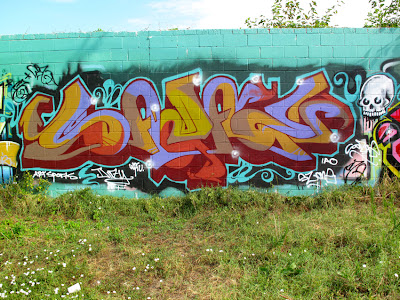 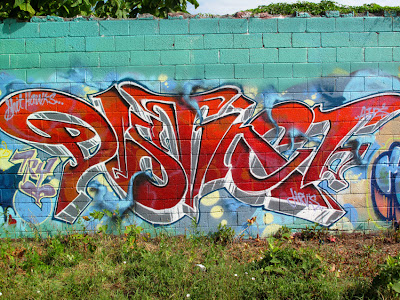 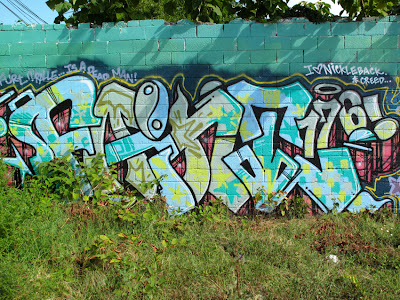 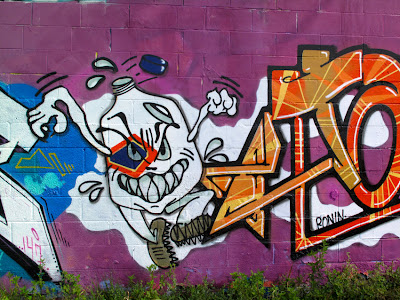 A rabid, evil bleach-bottle, rushing to eradicate the graf. 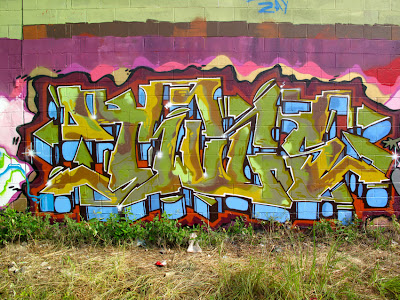 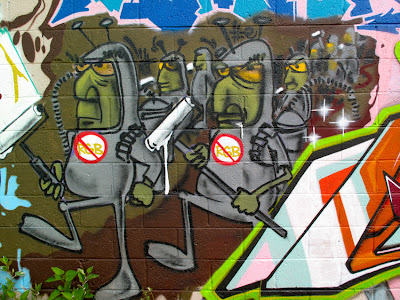 A goose-stepping buffing squad, here to erase all the hard work.

Hey I worked on that wall. pretty cool that you wrote this. You can check out my website at www.intelligentgraffiti.com .

You live an incredibly interesting life. You've inspired me to take a more serious look at moving on again...

I'm originally from South Africa so the pictures of Kenya struck a chord as well. Also, when you spoke about the Arctic, I recalled those friends of mine who had gone to Antarctica...

Can you tell me the street this on? I love to see graffiti
Thanks