It's a small world, full of Chinamen and Antarcticians

One of the aspects of the McMurdo lifestyle often described by its chronic subscribers is that one can never be quite sure when an ice person is going to crop up again in life. Invite someone from the normal world to stop by and visit next time they are passing through your state and, although they just might, they probably won't, I remember someone saying. But invite someone you met on the ice of Antarctica and sooner or later they are going to turn up. They are everywhere, and may turn up anywhere.

This afternoon, after surreptitiously filming the ecoteam wandering through Beijing's Forbidden City, we headed off to the Silk St. market, hundreds of thousands of square feet of multi-level shopping emporium that are the epicenter of Beijing knockoff sales. Here the vast and expensive marketing and advertising campaigns of all the world's famous brand names get their comeuppance. Everything from fresh-off-the-loading-dock Diesel jeans to Ray-Ban sunglasses stamped "made in USA" to never-swung Callaway golf clubs is available for pennies on the dollar of its billboard-bloated retail price. There were hot and trendy brands I had never even heard of, copied down to the last stitch. Or it may be that they have not even been copied, just fallen off the truck on the route west.

So complete is the collection of counterfeits on offer that I found, amongst the North Face all conditions gear and the Mountain Hardware fleece jackets, a pile of standard Antarctica issue "Canada Goose" three-quarter length snorkel parkas, the legendary "Big Red" worn by everyone at McMurdo Station, complete with "arctic" embroidered patches.

I hadn't seen a Big Red since I relinquished my kerosene soot and funk impregnated triple XL coat to the Clothing Distribution Center at Christchurch, New Zealand last December 16th, and here, in balmy Beijing, was a perfect copy, down to the coyote-fur trim around the hood. These jackets cost about $400 and are something like wearing a sleeping bag. I thought about buying one for Anne as a joke; she passionately hated hers on the grounds of claustrophobia, and she refused to wear it except when obliged to, on helicopter flights. In seconds the asking price for this carbon copy dropped from 860 Yuan, a bit more than $100, to 200 Yuan. As I walked away, the salesgirl was desperately splashing water onto the pile of coats to demonstrate their waterproofness.

We headed back down into the subway, some bearing bundles of bogus booty. Then, in the crush of passengers jostling to board the train, I spotted a familiar face. There are some 1.2 billion Chinese in China, of whom I know personally, none. Amongst them, elbowing his way onto the train beside me, was Georg Bakker, the McMurdo deejay and medical clinician with whom I had spent a pleasant October Sunday morning rifling through the ancient armed forces radio network salsa archive. My mind was blown.

Staggered by the coincidence, we renewed our aquaintance over the next three subway stops while the rest of the ecoteam shopping excursion looked on in amazement; an hour later we were jawing on the phone from one hotel to the other. Then Georg kindly schlepped it back into center city Beijing. We spent the evening being served cold Tsingdaos by a terrifying giant of a man, a gentle slab-faced Mongol with a few battered square formica tables set up on the sidewalk in front of his shop and some towering piles of sesame and red bean buns.

Communism, we agreed, about midnight, is an archaic, extinct construct, a future theme park theme. Already Mao's little red book is just another tourist knick-knack hawked in Tiananmen Square along with kites and facsimiles of old posters that feature workers joyfully waving their shovels in the air, even these being reproductions and reissues for the tourist trade.

Georg should by now be back in Vermont. I'm in Dunhuong, preparing to trek through the outskirts of the Gobi. But I'm looking forward to meeting him again. 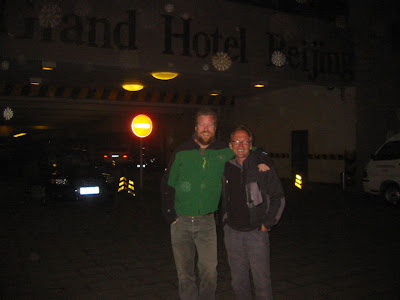